Interview
The Hijab as Power: Explorations in Northern Yemen
A strong and unexpected photographic exploration of the controversial hijab; as the Yemeni-American photographer behind the project tells us, “Woman’s rights will come when we can fully respect a woman—no matter how she looks or where she comes from.”
Interview with Yumna Al-Arashi
View Images

The Hijab as Power: Explorations in Northern Yemen
A strong and unexpected photographic exploration of the controversial hijab; as the Yemeni-American photographer behind the project tells us, &#8220;Woman&#8217;s rights will come when we can fully respect a woman—no matter how she looks or where she comes from.&#8221; 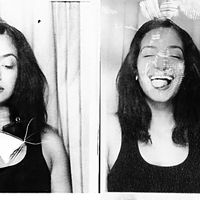 “I love creating work that serves as a canvas for people to think and discuss the subject matter,” says Yemeni-American photographer Yumna Al-Arashi, “I wouldn’t want to create it for any other reason.”

While on winding roads deep within the Haraz mountains of Northern Yemen, Al-Arashi saw a new potential in the landscape and in a spontaneous fashion—and thus, a project began to take form. In the images, we witness the region from a bird’s-eye perspective; we see lands that seem to stretch for eternity and deep valleys ridged with terraces and ancient villages. In the foreground of these shots stand the women dressed in black hijab. While the hijab is commonly regarded in a negative light, these women wear the veil exuding a real sense of power and poise; a grace parallel to the birds that share the frames.

In Northern Yemen, Al-Arashi confronts the negative attitudes targeted towards women of the Middle East and counteracts them by painting the women in a positive light, revealing qualities that go far beyond the veil itself. Below, LensCulture contributor Eva Clifford dives more deeply into Al-Arashi’s work.

LC: Can you talk us through some of the main motivations behind this project?

YA: This series came to fruition while traveling on assignment through Northern Yemen. I was working alongside two talented and strong Yemeni women. We spent a lot of time driving through beautiful mountainous roads, stopping by small villages along the way.

Yemen has always been home for me, but during this trip I really began to soak in the beauty of the country, through both the landscape and the people—especially the women.

Yemeni women are strong: leaders of their home, their families, and their land. There was a fight in me to defend them after being so drained by hearing the repeated question of my experiences as a woman in the Middle East. I wanted to show another side of wearing the hijab, one that portrays absolutely positive qualities: power, grace, beauty. Through this, I learned how to embrace the need to wear the hijab in such countries, and the advantages it brought me in my work.

LC: What do you find is most beautiful or empowering about Yemeni women?

YA: Society has a funny way of manipulating the woman, and historically has always done so.

I was raised in America to believe that my beauty and power resided in the fact that I could dress in little to no clothing, was a sexual object and could shop every single day as the result of being the target for most marketing and advertising.

In the Middle East, a woman’s power is not always a target for consumerism, and her beauty is reserved for those deserving.

As I spent more time in Yemen and became a bit more mature, I started to realize that there wasn’t any right or wrong with either view—so long as the woman had the ability and freedom to make her own choice.

There’s a knowledge of Yemeni women being the bearers of life, their majestic femininity is praised, their beauty is understood. I photograph Yemeni women and Western women the same—with power. I don’t see the difference in the two, I see conflict within society’s behaviours in manipulating or forcing women to behave a way they do not choose.

LC: Was there a reason you chose to photograph your subjects out in the mountains, rather than in their normal home environments?

YA: To be honest, the series began spontaneously while we were on the road. My internal feelings blended with the environments we were in; it just organically became the right place.

LC: What kind of reaction have you had so far from these photographs, and what kind of response were you hoping for?

YA: Mostly positive reactions, and a lot of discussion online, all of which is amazing. I love creating work that serves as a canvas for people to think and discuss the subject matter. I wouldn’t want to create for any other reason.

Some people have commented that these are not women, simply because you can’t see their faces or bodies. Others see the power they have.

Defining emancipation based on physical appearance is not adhering to the truest form of the word. Woman’s rights will come when we can fully respect a woman—no matter how she looks or where she comes from.