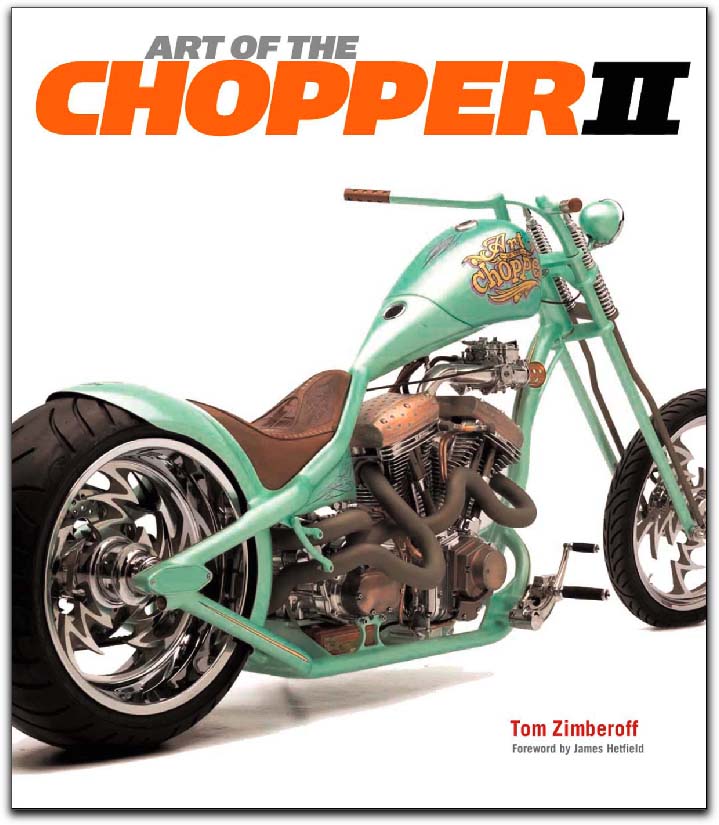 Volume II: Art of the Chopper
by Tom Zimberoff / Foreword by James Hetfield
Imagine motorcycles—unlike any you’ve seen before—arrayed on pedestals, resplendent in their sculptural variety. Extravagant mechanical confections, they are like Fabergé eggs with engines; exquisite yet hard-boiled. Forget what you think about bikers. Think haut moteur.

Haut moteur is to motorcycles as haute couture is to apparel.

Just as a couturier’s gown goes from runway to rack with each new season, an archetype of department store fashion unveiled, so do over-the-top motorcycles initiate a process of trickle-down style, which eventually wends its way to mainstream machines on a showroom floor. However, instead of sylphlike mannequins wearing Armani, Miyake, Prada and Westwood, strutting down the catwalks of tony salons in New York, Paris, or Milan, imagine the streets of Sturgis, South Dakota or Daytona Beach, Florida offering spectators a gaggle of bodacious bodybuilders astride the latest creations of Goldammer, Hotch, Nasi, Ness, and Perewitz. Only a few connoisseurs have the economic clout to ride home on the real deal instead of a knock-off, but their patronage allows an elite coterie of artists to reach new milestones of creativity, transforming an unruly congress of chrome, oil, rubber, pig iron, paint, and decibels into the high art of the low rider. Praise the lowered!

All motorcycles have two wheels, a chassis, a seat, plumbing, controls, and an engine. But choppers are made of parts that no longer look the way they were originally designed, parts that are used in oddball ways, and parts that never existed anywhere else to begin with. These eccentric machines confound orthodox ideas about form and function.

A chopper is the epitome of haut moteur: a highly conceptualized handmade motorcycle, a vehicle of self-expression balancing flamboyance and minimalism on two wheels. Like other idioms of uniquely American culture, including jazz, rock 'n' roll, or a Hollywood musical, the chopper has been embraced and transformed by proponents throughout the world.
ISBN: ISBN-10: 082125815X ISBN-13: 978-0821258156
Publisher: Bulfinch Press