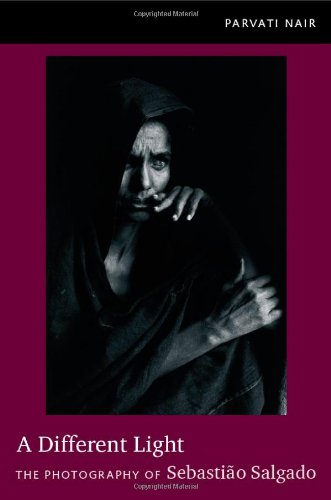 A Different Light: The Photography of Sebastião Salgado
by Parvati Nair
Publisher's Description
A Different Light is the first in-depth study of the work of Sebastião Salgado, widely considered the greatest documentary photographer of our time. For more than three decades, Salgado has produced thematic photo-essays depicting the massive human displacement brought about by industrialization and conflict. These projects usually take years to complete and include pictures from dozens of countries. Parvati Nair offers detailed analyses of Salgado’s best-known photo-essays, including Workers (1993) and Migrations (2000), as well as Genesis, which he began in 2004. With Genesis, Salgado has turned his lens from human turmoil to those parts of the planet not yet ravaged by modernity. Interpreting the photographer’s oeuvre, Nair engages broad questions about aesthetics, history, ethics, and politics in documentary photography. At the same time, she draws on conversations with Salgado and his wife and partner, Lélia Wanick Salgado, to explain the significance of the photographer’s life history, including his roots in Brazil and his training as an economist; his perspectives; and his artistic method. Underpinning all of Salgado’s major projects is a concern with displacement, exploitation, and destruction—of people, communities, and land. Salgado’s images exalt reality, compelling viewers to look and, according to Nair, to envision the world otherwise.
ISBN: 0822350483
Publisher: Duke University Press Books
Paperback : 376 pages
Language: English
Dimensions: 6.3 x 9.5 x 1 inches