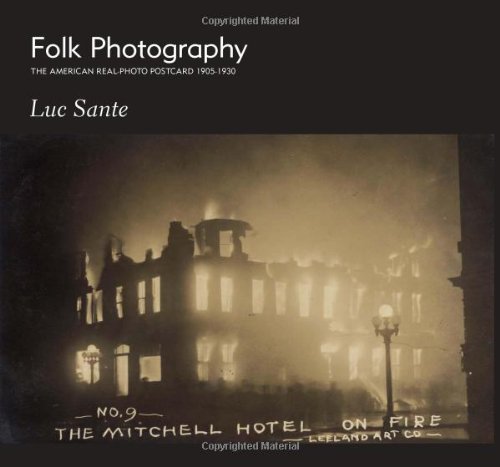 Folk Photography: The American Real-Photo Postcard 1905-1930
by Luc Sante
Publisher's Description
The postcard craze that swept the United States in the early 20th century coincided with the spread of pocket cameras and led to the phenomenon of real-photo postcards, so called because they were mostly made by small-town amateur and professional photographers and printed in their darkrooms, usually in quantities of less than a hundred (unlike the contemporary mass-produced photolithographs). Real-photo postcards were typically produced in small, often isolated towns whose citizens felt an urgent need to communicate with distant friends. The cards document everything about their time and place, from intimate matters to events that qualified as news. They depict people from every station of life engaged in the panorama of human activities - eating, sleeping, labor, worship, animal husbandry, amateur theatrics, barn raising, spirit rapping, dissolution, riot, disaster, death. The phenomenon began in 1905 and peaked in the 1910s, when many millions of real-photo postcards were mailed each year. Previous books have been content to display these cards for their socio-historical or nostalgia value; this book goes much further. The 122 postcards it reproduces cover the entire field of the cards' subject matter, but Luc Sante illuminates them with the penetrating, stimulating analysis expected from a writer hailed as 'a singular historian and philosopher of American experience.' Sante wants us to see the images not simply as depictions of a vanished way of life, but as a crucial stage in the evolution of photography, possessing a blunt, head-on style that inherits something of the Civil War photographers' plain aesthetic yet also anticipates the work of Walker Evans and other great documentary artists of the 1930s. Combining all his gifts as a chronicler of early 20th-century America, a historian of photography, and a brilliant critic, Sante shows how real-photo postcards offer a revealing 'self-portrait of the American nation.'
ISBN: 1891241559
Publisher: Verse Chorus Press
Paperback : 156 pages
Language: English
Dimensions: 8.5 x 7.8 x 0.6 inches