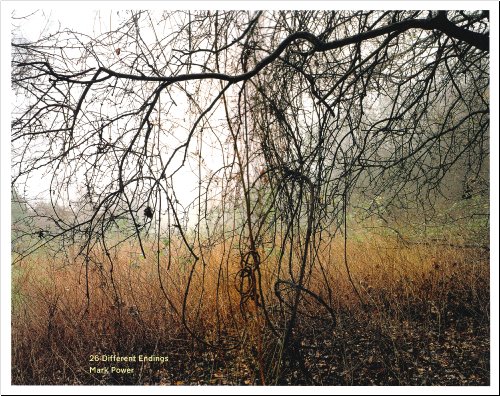 Mark Power: 26 Different Endings
by David Chandler
Publisher's Description
In this new Photoworks publication, British photographer Mark Power returns to the dialogue between real and imaginary space that characterised his most successful book to date, The Shipping Forecast (1996). Once again the premise for this work has been a map and a sense of those invisible boundaries that help to form a strong and durable idea of place. In this case that place is the great sprawl of London, whose outer limits are, for most of us, defined by the extent of the A to Z road atlas. It is these outer zones – where, as the map suggests, the city thins out and then falls away into nothingness – that are the subject of Power’s photographs.

Taking each page of the atlas as his guide Power has embarked on an epic quest into a kind of local unknown, a voyage into a form of melancholy emptiness where the energies of the city evaporate into a strange kind of inertia. Like The Shipping Forecast before it, 26 Different Endings is a project still deeply concerned with the weather, with the everyday drabness of places resigned to their climate of indistinction, where a condition of greyness has become the condition of life.

26 Different Endings is a report about what appears to be a deeply traumatised place. It is also about a state of mind that Power has become entranced by, one conditioned by flat white skies and a generous expanse of pebble dash, an overbuilt environment where all buildings, new and old, look something like ruins. David Chandler’s autobiographical short story, written in response to Power’s pictures, delves deeper into this state of mind, drawing on a vivid picture of both the emotional and physical landscape of his childhood.

In many ways, as Chandler suggests, Mark Power has photographed places of exile, and perhaps its psychology, too. 26 Different Endings presents places where the city’s vanquished have retreated to, where those who lived through the Blitz are happy to survive on supermarkets and soap operas, and where subsequent generations have become accustomed to not really knowing where or who they are.
ISBN: 1903796210
Publisher: Photoworks
Hardcover : 64 pages
Language: English
Dimensions: 11.4 x 14.5 x 0 inches