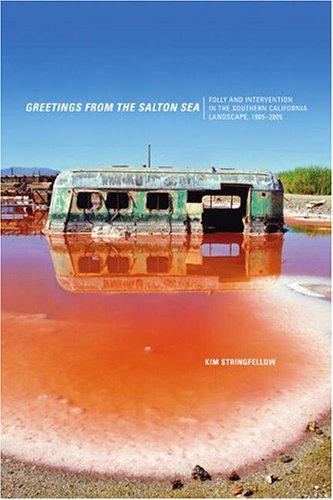 Greetings from the Salton Sea: Folly and Intervention in the Southern California Landscape, 1905-2005 (Center for American Places - Center Books on American Places)
by Kim Stringfellow
Publisher's Description
The Salton Sea is a man-made catastrophe, redolent with the smell of algae and decomposing fish. Nevertheless, the lake's vast, placid expanses continue to attract birdwatchers, tourists and artists. In Greetings from the Salton Sea, photographer Kim Stringfellow explores the history of California's largest lake from its disastrous beginnings—the 'sea' was formed when Colorado River levees broke and spilled into a depression 280 feet below sea level—to its heyday as a desert paradise in the 1950s and its current state as an environmental battleground.

Like the 400-plus species of birds that use the lake as a halfway point in their annual migration, developers flocked to the water too: they planted palm trees, built golf courses, and hired showstoppers such as the Beach Boys to perform at area resorts. These days, politicians seek to redirect the lake's only source of replenishment—agricultural runoff from surrounding farms—to water golf courses and green lawns elsewhere. Greetings from the Salton Sea's photographs capture the war among policymakers, environmentalists, developers, and the individuals still living along the lake's shores. As Stringfellow aptly documents, it is a war for water and, ultimately, for existence.
ISBN: 1930066333
Publisher: Columbia College Chicago Press
Hardcover : 144 pages
Language: English
Dimensions: 5.4 x 8.6 x 1 inches