Book review
In Whose Name?
“Does one form of religious intolerance lead to another?” Magnum legend Abbas traveled to 16 countries to try to sort out this thorny question.
Photographs by Abbas
View Images

In Whose Name?
&#8220;Does one form of religious intolerance lead to another?&#8221; Magnum legend Abbas traveled to 16 countries to try to sort out this thorny question.

Abbas, a member of Magnum since 1981, takes us along with him on a journey among the believers. This journey started on September 11, 2001 when Abbas watched live on Siberian television the tragedy taking place thirteen time zones away. A year later, confronted with a giant cross erected on the ruins of the World Trade Center, he asked, “Does one form of religious intolerance lead to another?”

This led him to embark on a seven year project completed in the book, In Whose Name?

Driven by a desire to understand how the Ummah, the polity of Muslims throughout the world, let violent jihadism develop in its midst, he traveled through 16 countries. From New York to Jakarta, from Kabul to Zanzibar, through Baghdad, Teheran and Dubai his quest was the same:

“My relationship with God has always been of a professional nature, I have never been on first name terms with Him. It’s not so much God who engrosses me as other people’s perception of Him and the unacceptable things they do in His name.”

With more than 150 images spread over 272 pages, this photobook showcases the remarkable range of Abbas’ photographs. Although the utilitarian design makes it feel more like a textbook than a fine art book, it’s an abundant selection of important content. Abbas asks some strong questions, and his outrage at war in the name of religion can be strongly felt. 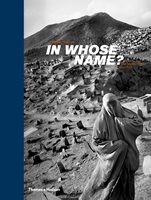