Book review
Events Ashore
Merging sand, sea, sky (and ships), An My Lê’s camera takes us around the world with the US navy, showing what life is like when the guns are quiet and a mighty military lies docile.
Photographs by An-My Le
View Images

Events Ashore
Merging sand, sea, sky (and ships), An My Lê&#8217;s camera takes us around the world with the US navy, showing what life is like when the guns are quiet and a mighty military lies docile.

A unity of form and content characterizes Events Ashore and while this may well seem ideal from an aesthetic point of view, the book unintentionally raises a question about such harmony.

The content is clear enough: photographs of the U.S. military’s non-combat presence around the globe – exercising, practicing, training, resting, researching. Their activities range from wildlife biologists radio-tagging walruses in the Bering Sea, a martial arts program in Ghana, skinning snakes as part of jungle training in Indonesia, delivering earthquake relief in Haiti in 2010.

Events Ashore comes prefaced with shots of five very different landscapes where the U.S. Navy operates: lush-green Panama, Navy-owned San Clemente Island, isolated St. Lawrence Island, Antarctica and rock-fringed Shoalwater Bay in Australia. The main body of work is divided into four sections, with the first and last mostly depicting events on land and the middle two broadly concerned with moments on board naval vessels of various kinds. Aircraft carriers loom large amongst the 125 images, with three gatefolds in an already plus-sized book (13 x 10½ inches). Besides the photographs, the book includes generous notes by Geoff Dyer on some of his favorites.

Besides the book’s form, befittingly expansive for the world’s most powerful naval force, the images themselves are equally unambiguous: an airy and immaculate palette, each shot framed to perfection using a Deardorff large-format camera. Each photograph bespeaks a naval force’s confidence in its professionalism and sense of duty, and a human landscape of loose-limbed personnel engaged in peacetime activities. Human interest is kept at a distance and with an absence of close-ups of faces; the figures remain anonymous. For example, in ” Target Practice, USS Peleliu” the sailors become strangely co-existent with the outlined figure that make up the target boards they are shooting at.

Visually, the most impressive images are seascapes showing combinations of sand, sea, sky and ships in congruence. Geoff Dyer’s note to one of the best, which shows two marines dwarfed by the extent of the empty beach they stand on and the scene before them, refers the reader to Caspar David Friedrich’s Monk by the Sea (1808-10). Significantly, though, the photograph lacks the troubled turbulence of the 19th-century painting and this raises a question about a collection of images where form and content reflect each other too neatly, too comfortably. Nothing is askew in these photographs, no moment of disturbance intrudes on scenes purportedly representing life for a military force unengaged in active combat.

If there is an underbelly to overseas life in the U.S. Navy, it has been kept out of sight and out of mind: the political is beautified, military power is aestheticized, and the viewer’s gaze remains held in an unbroken mode of pleasurable contentment. 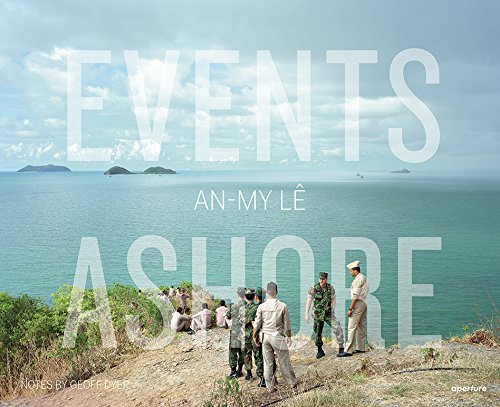