Book review
From Back Home
Anders Petersen and JH Engström were both born in the same remote province in Sweden, but generations apart. Together they revisited Värmland, and documented their experiences with two distinct photographic styles. Marc Feustel writes a review of this great book.
Photographs by Anders Petersen and JH Engström
View Images

From Back Home
Anders Petersen and JH Engström were both born in the same remote province in Sweden, but generations apart. Together they revisited Värmland, and documented their experiences with two distinct photographic styles. Marc Feustel writes a review of this great book.
From Back Home is a collaboration between two of Sweden’s leading photographers, Anders Petersen (b. 1944) and JH Engström (b. 1969), focusing on the Värmland region, one of the most sparsely populated provinces in Sweden. The two photographers have a shared relationship with the land—they both come from this region—as well as a strong personal relationship. Engström worked as Petersen’s assistant and the older man is a major influence for him.

The book won the Author Book Award at Rencontres d’Arles 2009, and deservedly so. The book is split into two parts, first Petersen’s images followed by Engström’s. Petersen’s section starts with the birth of a child suggesting that this will be a journey of intense discovery. The first few images immediately set a mystical, slightly oppressive, dark and lonely tone.

I find that Petersen’s vision has become more concentrated and more potent with time. His signature high-contrast black-and-white imagery crackles with energy as we are taken from birth to death and everything in between (although love seems to have the last word). Petersen’s series centers mainly on the people that cross his path, photographs of random encounters mix with those of friends, family and lovers. The series is also punctuated with little details of the surrounding landscape (an empty skate park surrounded by forest, a tree snapped in half).

Petersen has said before that he is seeking to become almost animal-like in his approach, to become a dog when he photographs, and this also comes through clearly in his raw, angular images. Animals also appear intermittently as subjects, reminding us of our mortality and of the fact that we are just another creature that will come and go.

The cover image, a photograph by Petersen of his mother, is one of the most haunting portraits I have come across in some time. It is full of dignity, an almost classical image, but there is a certain distance between the photographer and his subject which seems to contain all of the complexity of Petersen’s relationship with ‘home’.The second half of the book is devoted to Engström’s work. As opposed to Petersen, Engström hasn’t adopted and honed a signature style, instead mixing lo-fi, washed out color images, with cheap flash portraits or high-contrast black and white landscapes. He focuses mainly on life at night, from the drunken fumblings of teenagers in the forest to old couples pressed together at a dance. His photographs seem instinctive (in his introduction he writes “I’ve returned to something that my body and emotions recognize”), and he succeeds in creating a sense of openness and immediacy. There are also a number of photographs of collages of several polaroid's or small prints: a device that seems to be a way for Engström to revisit his memories, heightening the sense of return rather than of discovery.

Unfortunately, I found that his work suffered a little when juxtaposed with Petersen’s. The power and refinement of the older photographer’s images slightly overpower Engström’s looser and more diffuse approach. I also found some of the juxtapositions of images bizarre, with a result that seemed to add up to less than the sum of its parts.

Despite this minor reservation, this is a very successful book and the relationships between these two photographers and this remote region is undeniably powerful and complex. The printing of the book is beautiful and I found that the black-and-white work was particularly well reproduced.— Marc Feustel is an independent curator (www.studioequis.net), writer and blogger (www.eyecurious.com) based in Paris. 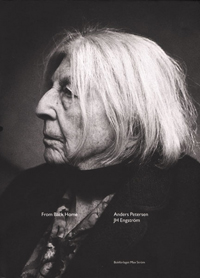