Book review
Strange and Familiar: Britain Through the Eyes of the World
The work of two dozen photographers, from great names like Frank and Winogrand to lesser-known gems, constitute this fascinating group exhibition, which offers a piercing collective gaze into how the venerable United Kingdom is perceived by those outside its borders.
Exhibition showing at the Barbican Art Gallery
View Images

Strange and Familiar: Britain Through the Eyes of the World
The work of two dozen photographers, from great names like Frank and Winogrand to lesser-known gems, constitute this fascinating group exhibition, which offers a piercing collective gaze into how the venerable United Kingdom is perceived by those outside its borders.

The book and exhibition, Strange and Familiar, are an instance of symbiosis: see one and you’ll be drawn to the other. Curated by the legendary observer of British life, Martin Parr, this is a unique coming-together of work drawn from two dozen artists, hailing from around the world, who share only one theme in common: Britain. Spanning the 1930s until today, this eclectic assembly of photographers all spent some amount of time in the United Kingdom taking photographs that reflect and probe the social and cultural identity of a political state that they came to as outsiders.

The list of photographers is a formidable one and includes luminaries like Henri Cartier-Bresson, Robert Frank, Bruce Davidson and Garry Winogrand as well as lesser-known but hugely interesting figures like Edith Tudor-Hart, and Shinro Ohtake. They bring a range of distinctive styles to their shared subject matter, from Edith Tudor-Hart’s searing images of London’s East End to Gian Butturini and Frank Habicht capturing the euphoria of the Swinging Sixties and the anti-War movement.

London is not the only focus of interest: Paul Strand looks at the Scottish Isles of the Outer Hebrides; Robert Frank travels to South Wales; Gilles Peress makes more than one trip to Northern Ireland at the height of the Troubles while Raymond Depardon visits Glasgow during a period of industrial decline.

Strange and Familiar is also chronicle of the very different ways in which photographers conceive of their art. The work of Edith Tudor-Hart, Robert Frank and Paul Strand points to socialist concerns and addresses the political consciousness of their audiences. Meanwhile, a photographer like Tina Barney evokes the contemporary penchant for sumptuous, large-sized portraits that will appeal more to collectors and curators.

In sharp contrast to Tina Barney (and hanging in the same room of the gallery to heighten the difference), the photographs of Rineke Dijkstra bring a distinctively personal style to large-scale colour portraiture, with examples of what caught her eye during visits to the Buzz Club in Liverpool in the 1990s. Dijkstra senses the vulnerability of the teenage girls in an endearing way that makes Bruce Gilden’s up-close and tightly-cropped portraits of the working class in the Black Country and Middlesex quite shocking by comparison.

All this is different again to another Dutch photographer, Cas Oorthuys, who happily wandered city streets four decades earlier for quirky shots of everyday life. Less placidly but just as arresting, Japanese photographer Shinro Ohtake’s work registers the degree of culture shock recorded with his arrival to London in 1977, aged twenty-two years of age. His captivating series of images are shown for the first time in the UK.

At the show’s opening, Jane Alison, the Barbican’s head of Visual Arts said, “This show promises to be a rich, varied and thought-provoking portrait of modern Britain.” Thanks to Parr’s astute eye and a clever, at times unexpected selection, her prediction has been proven correct. 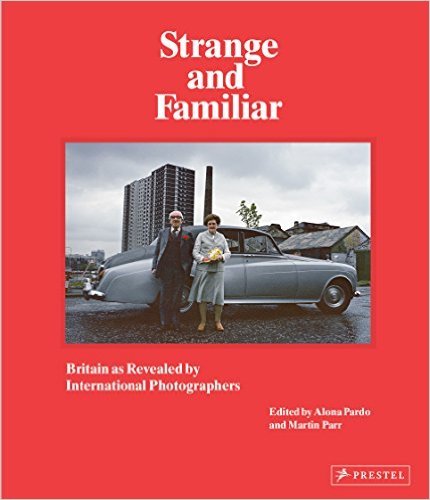