Interview
The Earth Is Only A Little Dust Under Our Feet
Belief in magical beings is widespread in Iceland. But as this enrapturing series shows, if there is any place to believe in magic, Iceland must be that place.
Interview with Bego Anton
View Images

The Earth Is Only A Little Dust Under Our Feet
Belief in magical beings is widespread in Iceland. But as this enrapturing series shows, if there is any place to believe in magic, Iceland must be that place. 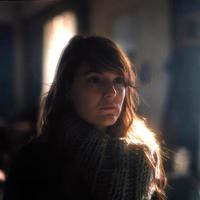 Everything exists, everything is true, and the earth is only a little dust under our feet.
—W.B. Yeats

In Iceland, children are instructed never to throw stones because an errant rock might hit an elf. Indeed, many Icelandic people believe in a host of magical beings: elves, trolls, fairies, hiddenfolk, monsters and ghosts. In gardens around the country, you will find tiny wooden elf houses and, occasionally, tiny churches that were built in order to convert elves to Christianity.

Bego Anton, who originally hails from Bilbao in the north of Spain, decided to try and discover this reality with her own eyes and her large-format camera. What she found during her two-month stay in Iceland was truly magical. While some of the magic has dissipated now that she is back in Spain, she believes that if there is a place to believe in magic, Iceland must be that place.

LensCulture assistant editor Alexander Strecker interviewed the photographer in Spain. Here is an edited transcript of their discussion:

LC: Can you tell me about the project?

BA: The project is about the Icelandic people’s belief in elves and “hidden people”. During a two-month artist’s residency, I traveled across the country and interviewed people who had the power to see elves. I took pictures of the people and the places where they (and the elves) live.

Since I can’t see elves myself (which is a pity, I really wish I could), I asked my subjects to describe what they were seeing. After hearing their descriptions, I took my pictures. By listening before shooting, I did my best to blend my subject’s perceptions with the reality that the camera could capture. I made sure to incorporate texts and objects, which help explain and justify my subject’s beliefs.

As I said, I can’t see the elves, but when I was in Iceland, I could feel them. When I came back to Spain, I could feel my belief starting to fade. Now, I don’t know what to say—I’m not sure if the elves exist or not. But it’s clear that they exist for the people I photographed. And I haven’t quite lost my faith yet. Since coming home, I received a letter from Iceland. The letter said an elf had come to find me in Spain. Sometimes, I feel he is around.

In general, I approach photography in a magic way. When I start a project, I don’t think about the location but about the story. These stories have no boundaries and take me all over the world.

LC: Is there a magic in photography?

BA: Yes, the magic is how I feel when I take pictures. When I carry my large-format camera, the way I look at the world is different. When I carry a digital camera, I don’t have the same feeling.

Also, the relationship that is created between me and my subject is different when I carry my larger camera. I usually take the picture and then send them the picture in the mail afterwards. This allows me to continue my relationship with my subjects.

LC: What was your relationship with your subjects like in this project? You must have felt very close.

BA: When you are in Iceland, you really understand how the people feel about the invisible, magical world. The people make you feel their feeling—they believe so strongly and passionately that it rubs off on you. When I was with them, their world really felt real.

I always treat my subjects with a lot of respect. I don’t want the viewer to laugh at my subjects. I understand that it’s normal to think these people are crazy when you first approach the project. But if you take a minute to look at the pictures, maybe they’re not. These are normal people, when you get to know them. The presence of a magical world is very clear in Iceland, whether you can see elves or not. I think the people’s beliefs arise from their strong link to nature. Our bond with nature is simply not as strong in the city. We have lost this feeling and its magic. We don’t believe so the magic is not there.

LC: What was it like being an outsider and making this project?

BA: In the end, I don’t think it mattered that I wasn’t Icelandic. I felt like I really understood what my subjects were trying to tell me. I was really interested in their stories and their beliefs. That’s why it’s very important to read the texts (the captions, the letter, the diploma) in this project.

The reason I like taking pictures is because it is an adventure. I have the chance to enter worlds that I can only go into because I’m a photographer. In the end, it became very personal. Although I was listening to them, we were always talking about me—my aura, my energy, my future.

So I’m telling a story about the outside world but also about myself. I think it’s very important to get close to what you’re taking pictures of.

LC: Do you think about going back and continuing the project?

BA: I want to go back and continue but I also think that part of the magic is how close I felt. I’m not sure if I can get back to that—it might be impossible.

But if I did go back, I would be interested in focusing on people’s interactions with the invisible. How could I photograph the invisible? Sounds like another adventure!

Editors’ Note: We discovered Bego Anton’s work at the exhibition ”P2P: Contemporary Practices in Spanish Photography”, which ran along with many other fantastic exhibitions as part of PHotoEspana 2014.

© Bego Anton
© Bego Anton
When I met Ragnhildar, Pulda and Amba were there with us, even if I couldn't see them. Ragnidar can see doors in the stones where the elves live. She has gone into their homes and eaten their food. She told me the elves keep animals too—cows, sheep—but that their sheep are not much bigger than your hand. © Bego Anton
Ragnhildar also told me that unicorns and dragons exist. © Bego Anton
I tried to see elves with Bryndis' help. We went up a mountain, reaching a huge stone where her friends, the elves, live. I closed my eyes and tried to focus my energy field. I tried very hard but I couldn't see all the elves that Bryndis said were surrounding me. In the picture, she is hugging one of her friends. © Bego Anton
Letter from Bryndis. © Bego Anton
Pulda and Amba gave me this postcard as a present. It's a picture in which Ragnhildar captured the essence of an elf. © Bego Anton
© Bego Anton
© Bego Anton
Some of the roads in Iceland are built with a deliberate kink to avoid bulldozing a rock where an elf might live. When this road was being built, the construction was beset by mysterious accidents. The Icelandic Road Commission decided to divert the planned route so as to leave the elves alone. © Bego Anton
© Bego Anton
© Bego Anton
Lara is sensitive with stones. She collects stones full of wisdom and keeps them in her pockets until she feels they are empty. Then she puts them back in nature. She's always been able to see "hidden folk." For her, a world without hidden folk would be a world without magic. © Bego Anton
© Bego Anton
Porunn lives with Oli, an elf who never combs his hair. When I visited Porunn, she saw my aura. She told me that the hidden people would always protect me. I took a picture of the two of us (me on the right, Porunn on the left). When I sent it to her, she told me that Oli was standing and smiling right next to her. © Bego Anton
Saeunn's neighbors are "hidden people". Her ability to see them is a gift that every woman in her family has. She's never talked to them. Elves borrow things from her home and only return the objects after they have become useless. © Bego Anton
Once they took Roustabout, an old movie featuring Elvis Presley. Eventually, they returned the videotape, unharmed. © Bego Anton
The Icelandic Elf School is a school in Iceland that teaches students and visitors about Icelandic folklore—particularly about the "hidden people" and the 13 different kinds of elves that the school believes inhabit the country of Iceland. Over 9,000 people have attended the school since its opening in 1991. © Bego Anton