Interview
Camera in Hand, Magic in the Streets
“…if you’re in the zone, the light is right, the moment comes alive, then—”click!”—the magic is made. I wouldn’t want to be anywhere else but in that place and moment…”

Camera in Hand, Magic in the Streets
“…if you’re in the zone, the light is right, the moment comes alive, then—”click!”—the magic is made. I wouldn’t want to be anywhere else but in that place and moment…” 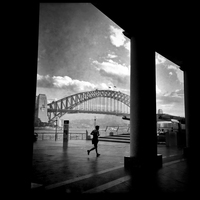 LC: All (or almost all) of us are street photographers at this point. As in, we all take photos of the world around us on a near constant basis. What was your “a-ha” moment with street photography? When something clicked and you realized you wanted to take it a little more seriously/deliberately?

BE: My career has been as a television cameraman and I have only occasionally dabbled in photography over the years with my old and faithful Minolta X700.

Then I got an iPhone and the “a-ha!” moment was a silhouetted reflection at Orly International Airport in France, nearly two years ago (late 2014). The result was amazing. It’s not my favourite photo and it’s not particularly strong, but it was a “wow” moment of realization with what the iPhone was capable of doing. I subsequently researched apps like Hipstamatic and Snapseed and Instagram collectives like Tiny Collective and Hikari Creative—and I was instantly hooked.

Street photography, to me at least, finally came alive with a camera, darkroom and a gallery all in my pocket.

LC: Do you ever go out expressly to shoot your work or is it always spur of the moment? Is there a conscious mindset that you embrace or a constant awareness of the world, its forms, the light etc.?

BE: I feel I’ve always had a mindset for light and shadows and how and where it falls, as it were. And yet, I’m catching myself, since capturing and expressing an awareness as an art form is another matter altogether.

I’m always looking for a contrasting moment, which, for those that know me, would be indicative of a deeper philosophy as well. For me, like so many others, the iPhone has made capturing and editing that much more accessible so that I find that there’s now never a reason not to make a photo. If the moment is in front of you, planned or not, then shoot it!

Street photography, to me at least, finally came alive with a camera, darkroom and a gallery all in my pocket.

BE: There’s so many, but consistently, Ryiuchi Sakamoto is a wonderful musical inspiration—going all the way back to his collaboration with David Sylvian on Secrets of the Beehive. Wim Wenders’ film Wings of Desire affected me profoundly when I was younger as a great visual and metaphysical inspiration for dwelling upon the duality of life, in all its forms. Paul Bowles and Isabelle Eberhart captured my imagination for many years with their insightful writings in the Moroccan desert. Werner Bischof would probably be a favourite photographer of old and Trent Parke is just outstanding…

There’s also a large number of Instagram photographers who are hugely inspirational, if only for the fact that their work is so accessible and more importantly, contemporary.

LC: You shoot almost exclusively in B&W. What attracts you to monochrome? Are you ever tempted to shoot more in color?

BE: For the last twenty odd years that I’ve been a television news cameraman, everything we film is in color. Artistically, therefore, I love expressing myself in monochrome. Making photography in monochrome is an awesome alchemy, hand in hand with the conscious mindset and the awareness of light. There’s not much more than this except for the quite profound realisation that it’s not reality, it’s photography.

LC: Can you talk about your editing/selection process a bit? As your audience, we only ever see the final work that comes out the other side. But what goes in beforehand? For example, I notice you post about once per day on Instagram. I imagine many photos are left on the “cutting room floor”…

BE: It depends. 99% of the time I shoot on Hipstamatic. Mainly because you can only make one picture at a time. It feels like taking a photo, not just holding down a button and then making a selection from hundreds of frames. A little old fashioned, if you will. Also, as there isn’t a zoom option, I like the challenge of shooting with a single lens. I move instead of the lens…but that’s the fun in that I try to not crop my pictures, challenging myself to get a successful “full frame.”

Blending and editing with filters and apps like Hipstmatic and Snapseed is a great part of the creative process to creating an image—so when it all comes together, it’s a wonderful feeling.

LC: You’re an avid traveler. If you could snap your fingers and appear on any streets in the world right now, which would they be? Where do you really want to shoot that you haven’t yet, in other words?

BE: I thought about this and all the great cities to shoot in and, yes, there’s a few to dream about. New York, most definitely. Or returning to Kabul or Kandahar in Afghanistan as a photographer. The light is amazing…North Africa as well. Also, I’d love to go home to Sydney and challenge myself to redefine that visual landscape. Paris, too.

However, I came to the conclusion that I’d love to shoot anywhere, even if it’s the same local places I pass every day. I mean, if you’re in the zone, the light is right, the moment comes alive, then—”click!”—the magic is made. I wouldn’t want to be anywhere else but in that place and moment, happily and contently making pictures, wherever it is in the world.

You can find more of Bredun’s work on his inspiring Instagram feed.