Feature
The Face(s) of Spain: Portrait Masterworks
An iconic series of portraits that captures Spain’s leading figures in the arts and government since the renewal of democracy after Franco’s death.
Photographs byChema Conesa
View Images

The Face(s) of Spain: Portrait Masterworks
An iconic series of portraits that captures Spain&#8217;s leading figures in the arts and government since the renewal of democracy after Franco&#8217;s death.

All photographs are accurate. None of them is the truth.

Through his photographs in print magazines and fashion collections, Richard Avedon helped define an American sense of style, beauty and portraiture for a half century. Meanwhile, in Spain, Chema Conesa has been doing much the same for nearly 40 years, in comparative anonymity. From the venerable members of the Generation of '36 to the glamorous Penelope Cruz, Conesa has created an iconic body of work defining a sense of success, style and freedom of expression during Spain's 40 years of democracy.

The recently opened exhibition, "Paper Portraits", features over one hundred photographs drawn from Conesa's career as a portraitist. The title, referring to Conesa's life-long association with newspapers and magazines, speaks to his ability to work by commission while also creating artistically worthy works that stand the test of time. Cumulatively, Conesa's body of work provides the viewer with a fascinatingly idiosyncratic portrait of post-Franco Spain by portraying the country's leading figures in the arts, letters and government.

Chema Conesa's career began just one year after Spain's transition to democracy, in 1976. Beginning as a photographer and copy-editor for El País, the country's leading newspaper, Conesa spent his career cataloguing Spain in both word and image as part of his daily desire to capture the life of the country. As his eye developed, he almost always shot in color and almost always sought a pose which revealed the sitter in a new light. Unlike some other established portrait photographers (Richard Avedon), Conesa was constantly willing to explore a different approach given the specificity and character of his subject. For example, while we gaze at Penelope Cruz on what looks like a film set, we see the writer Francisco Umbral through his iconic glasses or Camilo Jose Cela (a Nobel Prize winner) in an unexpected martial arts outfit.

In these days of diminishing commissions and declining print media sales, it's both uplifting (and a bit nostalgic) to see how a career spent fulfilling other people's assignments could result in such a masterful and memorable body of work. 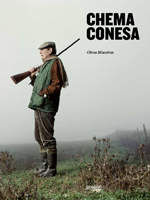 Editor's Note: Chema Conesa's work can be seen at the exhibition "Paper Portraits ", along with many other fantastic exhibitions that are part of PHotoEspana 2014 . The festival is running in locations all over Madrid from June 4 - July 27, 2014.