Award winner
Powerplant Youth
Set against the backdrop of a depressed, post-industrial East German town, we find the unruly energies of youth looking for some outlet, striving for a different future.
Photographs and text by Daniel Seiffert
View Images

Powerplant Youth
Set against the backdrop of a depressed, post-industrial East German town, we find the unruly energies of youth looking for some outlet, striving for a different future.

Daniel Seiffert is one of the 50 best emerging photographers for 2015, as voted by the eight-member international jury for the LensCulture Emerging Talent Awards 2015. Here is his winning entry and artist’s statement. View his profile to learn more about him and to see more of his great work.

The depicted images are samples from my book “Kraftwerk Jugend” (Powerplant Youth). It is my final work at Ostkreuz School for Photography in Berlin, supervised by Prof. Ute Mahler.

For one and a half years, I accompanied teenagers who were born after 1989 in Lübbenau, a small town in the southeast of Brandenburg, Germany. Thanks to its powerplant “VEB BKW JUGEND,” Lübbenau used to be an important industrial facility of the former DDR [ Communist East Germany]. After the big change in1990, the plant was closed and then it finally collapsed thanks to a controlled demolition in May 2010 — the very day I began my work in Lübbenau.

Over the past 20 years the former “Energy-City,” Lübbenau has been trapped in a circle of economic recession, unemployment, and population decline. Unfortunately, this can be called typical for Eastern German towns—a development that is deeply connected to urban foreclosure and “controlled partial demolition.”

However, I am not just interested in the pure documentation of urban decline. Much more, I deal with another question: What does it mean for these youngsters to grow up in a surrounding that is continuously shrinking and aging?

That means I focus less on the “causes” than on some of the consequences of such a decline. My work dedicates itself to the young people whose personal development is contrary to the one of their environment. In my pictures, the young protagonists are acting in front of a ruined stage. The environment is a product of an ongoing, inevitable process of history, while the presence of adolescents changes the way it appears. Against the urban spaces’ tragic lack of a future, a youthful shot of sanguinity comes to the forefront.

My kaleidoscope of images tries to describe the wondrous state of uncertainty which lies in between youth and adolescence. Ultimately, I am trying to depict the universal emotion of that period: stagnation and, finally, departure.


Editors’ Note: Kraftwerk Jugend has been published as an excellent book. You can find out more below. 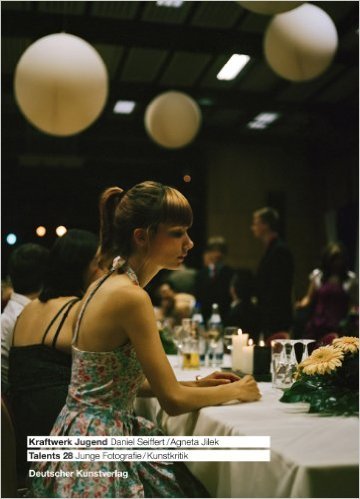