The Rehearsal of Space
A volume documenting the scientifically created objects, clothing and environments that enable man&#8217;s journeys into outer space.

Each one of the objects portrayed, built to explore the outskirts of our knowledge, contains in itself the sum total of what humankind learned until the moment the object was constructed. In a simple glove is condensed the knowledge of the intimate structure of matter, the four basic interactions at work in Nature and the local structure of the Universe. However, [the purpose of this] simple glove…is to lead us towards the unknown. The humans wearing them perform definite steps to clear a few more inches out of the path of knowledge and lead us further in the quest for infinity.

—Joao Seixas, member of the CMS collaboration at the Large Hadron Collider. From the afterword to The Rehearsal of Space


Intellectually, The Rehearsal of Space packs a punch. As one can sense from the book’s full title, The Rehearsal of Space and the Poetic Impossibility to Manage the Infinite, a lot of thinking went into making this project. In the introduction alone we find references to: a Michel Foucault lecture, the work of conceptual artist Marcel Duchamp, a novel by the surrealist author Raymond Roussel and Pink Floyd’s album The Dark Side of the Moon. Dense as this seems, the text is an enjoyable read, cramming in enough references and material to fill out a reading list for months.

But what about the pictures? For all the richness of the ideas behind the work, the images themselves feel cold, sterile, and objective. Perhaps this is the intention of the photographer—but the photographs feel lacking in the sense of wonder that we feel so strongly after reading Seixas describe a simple glove as a symbol of humanity’s “quest for infinity.”

It is hard not to compare Martins’ work with another, much more playful series previously featured on LensCulture: Space Project by Vincent Fourier. 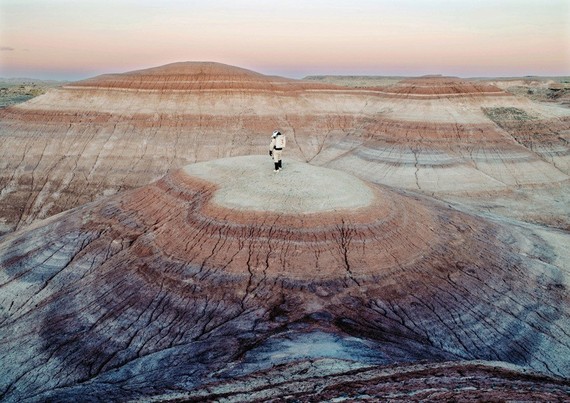 Whereas Fourier talks about the dream-like nature of space, he also shows it to us. He includes human figures, dazzling landscapes, and even the similar gloves that Martins places on the cover of his book. Martins’ pictures only come alive after the accompanying texts have been pored over, while Fournier is able to take us into the infinite space of our imaginations on the basis of his pictures alone.

In a great photobook, the images have the power to inspire which the supplementary texts then push even further. In Edgar Martins’ latest offering, the hierarchy feels reversed: while the book’s texts draw our minds towards “poetic impossibility,” the images seem to leave us oddly grounded back on Earth. 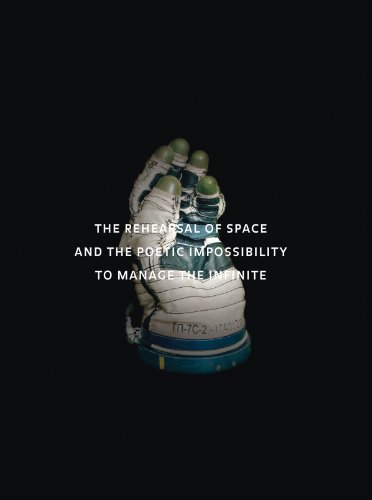 The Rehearsal of Space and the Poetic Impossibility to Manage the Infinite
Edgar Martins
Publisher: La Fábrica
Hardcover: 184 pages

Interior of Large Space Simulator vacuum chamber, Noordwijk, TheNetherlands. The LSS is Europe's single largest vacuum chamber. It is used to test full-size spacecraft in representative space conditions. Its high-performance pumps can achieve a vacuum a billion times lower than standard sea level atmosphere. Its lamps duplicate the energy intensity experienced close to the Sun. © Edgar Martins
Mobile gantry for the Vega launcher, seen from underneath in Kourou, French Guiana. This 50m-high metallic structure, weighing more than 1,000 tons, allows for the vertical mating of Vega’s stages and the upper part housing the spacecraft. Once the launcher is fully prepared and checked, the gantry is rolled back, thereby clearing the way for Vega’s final countdown. © Edgar Martins
Assembly of the Near InfraRed Spectrograph in the ESA-NASA James Webb Space Telescope, Class 5 Integration Facility, Germany. The telescope is a multi-object spectrograph capable of observing more than 100 astronomical objects simultaneously over a wide field of vision. © Edgar Martins
S5 payload preparation complex – spacecraft fueling bay at CSG, Europe’s Spaceport in Kourou, French Guiana. The S5 facility enables a satellite’s full preparation process – including checks, fuelling and final pre-launch validation – to be performed under one roof in cleanroom conditions. © Edgar Martins
Columbus Training Simulator, Cologne, Germany. The Advanced Training phase focuses on in-depth knowledge of Columbus systems, payloads and Automated Transfer Vehicles (ATV), as well as related operational procedures. The European Astronaut Centre provides training facilities covering these elements and payloads. © Edgar Martins
Mockup of Node 2 in the Erasmus high bay, Noordwijk, The Netherlands. Node 2 is a pressurized module of the International Space Station, serving as a connecting passage between the European Columbus laboratory, the US laboratory Destiny and the Japanese laboratory Kibo. NASA held a competition amongst schoolchildren in the USA to find a name for the Node 2 module — Harmony. © Edgar Martins
Helmet of a SCAPE suit used by the propulsion crew during spacecraft filling operations, CSG, Europe’s Spaceport in Kourou, French Guiana. SCAPE stands for Self-Contained Atmospheric Protection Ensemble, a protective suit with an air supply that allows the wearer to work safely. © Edgar Martins
Space glove, Yuri Gagarin Cosmonaut Training Centre, Star City, Russian Federation. © Edgar Martins
Astronaut dressing room. The Sokol suits were introduced in 1973 and are still in use today. Their purpose is to keep the astronaut alive in the event of an accidental depressurization of the spacecraft. They cannot be used outside the spacecraft. The suit uses an open-circuit life support system that somewhat resembles scuba equipment and weights around 10kg. © Edgar Martins