Book review
The Iranian Revolution in Photobooks
This travelling exhibition and its accompanying publication trace the legacy of photobooks in Iran immediately following the country’s violent Revolution.

The Iranian Revolution in Photobooks
This travelling exhibition and its accompanying publication trace the legacy of photobooks in Iran immediately following the country’s violent Revolution.

The power of publications to record, transmit and widely disseminate information is something we often take for granted. While many of us are surrounded by books, we forget that throughout history (and even today), in regions the world over, the censorship of publications is a fundamental tool for suppressing mass opposition. But something about this restriction bestows a heightened power upon books, and their tangible political possibilities open up more space to create something potently alive and influential. When people are made aware of the power of books, creativity spreads like wildfire, and messages are conveyed between the lines, through images and words alike.

Beginning with civil demonstrations against 2,500 years of continuous monarchy, the events that made up the Iranian Revolution took place between 1977 and 1979. At the time, a nepotistic lineage was embodied through the rule of Mohammed Reza Shah Phalavi, who eventually left Iran in exile in January 1979. He was subsequently replaced by the Grand Ayatollah Ruhollah Khoemini, the leader of the Revolution and Islamic Republic. It was a tempestuous time for citizens of Iran, and the impending threat of violence justifiably heightened a sense of caution and fear amongst Persians—a paranoia that was internalized, and is one that endures within many survivors to this day.

In a travelling exhibition and book, both titled Engelhab Street, A Revolution Through Books: Iran 1979-1983, the bound representations of this collective uncertainty are illustrated through the country’s rich bookmaking practice between 1979 and 1983. During these few fleeting years, there existed an untethered freedom of expression, ushered in during the initial installation of the new Islamic government. Engehlab Street (engelhab translates to ‘revolution’ in Persian) is an avenue in Tehran known for its bookstores and publishing houses, which sprung to life during the post-Revolution influx of brochure, leaflet and book dissemination.

Many of these bookstores still exist today, and a few years ago, while photographic artist Hannah Darabi was browsing the stock in one of the shops, she came across Allah Akbar, a book by Shahrokh Hatami. “When I found the book, I immediately recognized that great care was taken in its construction, but it was by no means a luxurious book. The more I looked, the more I started finding other books that had this quality of being constructed in a very tight time period. In their form, we can see the emergency and need to communicate a message as quickly as possible.”

Having grown up and studied photography in Tehran, Darabi was accustomed to the idea of photobooks as luxury objects. There wasn’t much of a self-publishing scene, even in the realm of zines, so coming across this hastily-compiled visual publication was intriguing for her. “It was interesting and made think: there was a culture here, and we lost it. Clearly people thought that the book was a very strong weapon, and something that could be used to communicate with people. But they also saw it as something that could preserve their work forever. Today, many photographers are interested in books as an accompaniment their exhibitions, so that something remains when the exhibition is over. I always knew that literature and textbooks were very important in Iranian society, but it was interesting to see that at some point, photography was also important in this way.”

When we look at photobooks today, many of them are a presentation of a body of work, but in discovering Hatami’s work, Darabi realized that the publication was created as a vessel for knowledge—intelligent, sentient papers bound with a cover, brought to life through their ability to keep secrets and understand the power of their final form. Documentary photography really flourished in Iran after the Revolution, and the more Darabi looked, the more she saw how prolific these photographic publications were. The medium was being used in a very conscious, methodical way, and the publications were united in their graphic design, influenced by Mexican revolutionary wall painting and Russian styles. “You can see the influence of graphic design on a number of the covers,” Darabi explains. “They are really colorful, sometimes influenced by pop culture, but when you open them they are filled with photos of the wars, which is actually a very tragic dichotomy.”

So Darabi started collecting more books as she came across them, and eventually began planning an exhibition and publication of the collection. “Engelhab Street offers an alternative reading of these works—an approach that brings together both collective and personal memory,” Darabi explains. Both the exhibition and book are divided into three sections. The first contains a general overview of Iranian photobooks from the period, which grounds viewers in an understanding of the era’s aesthetic and visual trends. The second section contains the political books, which present a network of varying partisan voices who used the hastily-crafted records as vessels for their message. The third component consists of what Darabi calls ‘Reconstructions’: a series of artistic readings of the collection that include everyday objects, documents, family photos, audiovisual images and postcards. This network of chapters offers a dynamic interplay that guides us through different interpretations of the work, rather than presenting us with a basic historical overview.

While the exhibition at Le Bal just ended, the show is travelling to FOMU in Antwerp, where it will be on view from March 1 to June 9, 2019. Even if attending the exhibition isn’t possible, the book is an incredible resource for understanding this remarkable historical moment. Darabi worked closely with anthropologist Chowra Makaremi, who contributes a number of wonderful contextual essays, including an historical overview of the Revolution and a paper outlining the history of “white covers”—a type of photocopied, zine-like book important for knowledge dissemination during and after the Revolution. These texts, among others, ensure than any discrepancies or gaps in knowledge are filled for the reader, and elevate Darabi’s publication from a basic exhibition catalogue to an important historical tome. In addition to these essays, Darabi conducted interviews with as many surviving members of the era’s publishing community as possible, crucially including their voices in the dynamic historical mix.

When reflecting on what she wants her audience to take away from the work, Darabi says, “The thing is, I am not an historian, and while I was a collector for this project, it’s not the primary label I use to identify myself. It was important for me to approach this work with the understanding that I am an artist, so I didn’t do the work of an historian, and I don’t like calling this collection an archive. I want to make that distinction very clear.” Instead, Darabi wants her viewers to approach the work as a collection of ideas and interpretations that leave room for her audience’s own interpretations and experience. She continues: “I want people to work through this book, acquiring the knowledge little by little through each chapter until they are guided to the artwork at the end, where they can fully understand its context and symbolism. This is not just about history—it’s also about image culture. Not just in Iran, but on an international scale. It helps us work through all these cultural influences within a larger scope, and understand how photography impacts us every day, all over the world.”

Editor’s Note: As mentioned above, Hannah Darabi’s exhibition will be on view at FOMU in Antwerp from March 1 to June 9, 2019. If you’d like to purchase a copy of the book, you can do so here. 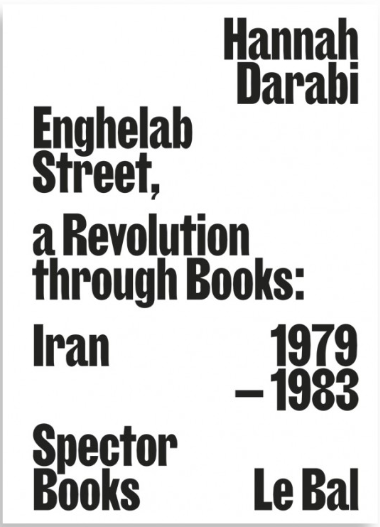