Award winner
Six Degrees of Copenhagen
Taking inspiration from the idea that every person on Earth is connected, at most, by six degrees of separation, this series creates raw, intimate portraits that begin with a simple conversation in the street…

Six Degrees of Copenhagen
Taking inspiration from the idea that every person on Earth is connected, at most, by six degrees of separation, this series creates raw, intimate portraits that begin with a simple conversation in the street…

Taking its point of departure from the idea that every person on Earth is connected, at most, by six degrees of separation, this series of photos depicts human relations throughout the city of Copenhagen.

The set up is that Jens Juul portrays random people that he engages with on the streets. These chance meetings end up with him taking highly personal photos of the people he has met in their homes. At the end of each session, his subjects then send Juul to another person in their network. He goes on to capture them, who then in turn give him the name of one person more. And so on…

Fascinated by this simple yet immensely powerful concept, LensCulture managing editor Alexander Strecker reached out to Juul to find out more about his project and his work in general. Below is an edited transcript of their exchange:

LC: Can you describe to us the origins of this project? Where did it begin, how did it develop?

JJ: I like to photograph people whom I don’t know beforehand. It begins when I stop people in the street. Still, I like to have a context, some kind of storyline to follow. When I fell upon the intriguing thought that every person on the planet is connected by, at most, the sixth degree, I had what I needed.

Although the idea seems almost obvious in our age of social media, the notion first surfaced in 1929, when Hungarian author Frigyes Karinthy wrote a short story called “Chains.” In it, he prophetically described how new ways of communicating and travelling had made the world shrink. All of a sudden, having acquaintances in other parts of the world became more common. Thus, Karinthy wrote, you could point to a complete stranger on the other side of the planet and realize you were no more than six levels of connection away by virtue of chains of friends.

This was the basis for my project, “Six Degrees of Copenhagen.” I did not approach the idea scientifically, but rather saw it as an almost magical way to travel through the city and meet its inhabitants. So, each person portrayed here is part of a chain of acquaintances, simple as that. I began by approaching a stranger on the street and after photographing them, they recommended someone else in their network who I could portray in the same way.

LC: The way you describe the project makes the process seem very organic and natural. Can you say more about the specifics of producing the work?

JJ: For those strangers who accepted to be photographed, things progressed quite directly. I would invite myself to their home so that the session could take place in the comfort of a familiar, safe environment. A visit could last from a couple of hours to much longer, depending on how long it took to break the ice and get just the right shot I was looking for—raw, yet intimate.

Still, despite some differences, I should say that everyone I worked with was incredibly open. Although the pictures were highly personal, the fact that each subject was recommended by a friend meant they felt taken care of.

What I loved was how the people I photographed came from all walks of life, old and young, and carrying on ways of being immensely different from one another.

LC: Many photographers describe the camera as a passport to take them to new and strange places around the world. Meanwhile, you used it as a key to access local people’s interior worlds. Can you say more about how the camera grants you a doorway into very private and unexpected places, that are just around the corner?

JJ: I genuinely believe that what makes me able to take the pictures that I do is not so much the equipment I bring, but my ability—and more importantly desire!—to speak, ask questions and do a lot of listening. Meeting people I don’t know and getting to take in their life stories in generous gulps really gets me.

You don’t have to go to war zones and distant places to experience drama and the unknown—odds are, they are just around the corner.

LC: We often relate street photography with the decisive moment, with moments captured in 1/1000th of a second. Do you consider your work “street photography” in any way? If so, how does it relate to the more commonly held notions of it?

JJ: Photography is all about decisive moments, whether it’s about documenting what’s in front of your eyes or, in my case, working on a project where you are portraying people. In the latter, it really comes down to a feeling, an interpersonal decisive moment: does my subject seem approachable or not? When I approach people in the street, I am faced with the challenge of having 10-30 seconds to read them and become intrigued. Once the connection has been made, the decisive (photographic) moment comes much later.

The kind of photos I take demand letting our guards down. This naturally brings me quite close to the people I photograph within a few hours (or even faster, sometimes).

In my experience, if you truly listen to people, and show them respect, they meet you with trust. With this trust, magic happens and decisive moments will occur.

My series “Six Degrees of Copenhagen” has its starting point in the streets and that is important. But the photographs are taken in the comfort of people’s homes. So, in themselves, they probably aren’t street photographs as such. But I do like to more classical street photography as well. Recently I was at the biggest Scandinavian music festival, Roskilde Festival, and I spent six days wandering around the camp area with my camera, capturing all the laidback craziness going on. With photographs like that, it is often the 1/1000th of a second that counts. 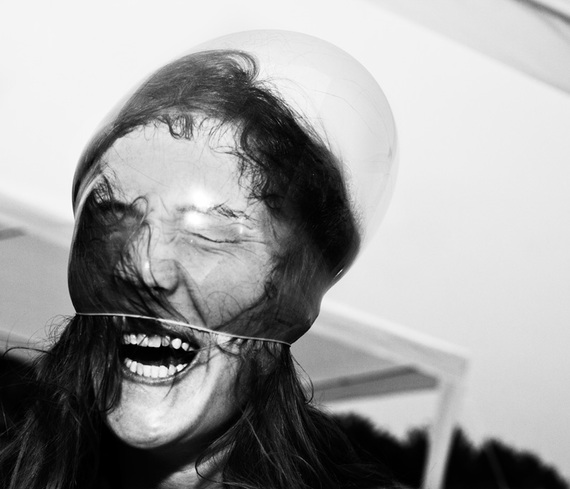 LC: You work in a very idiosyncratic black-and-white style. Who are your visual influences (not just photographic) that helped foster your aesthetic?

JJ: ”Frankenstein,” the one with Boris Karloff, left an irreversible impression on me as a boy. So did the films of Luis Buñuel: his images of life as seemingly pretty and normal, but in fact, filled with distorted, twisting harmony as the story progresses. Finally, I must mention my fellow Scandanavian, Ingmar Bergman, whose cinematic genius so clearly explains life’s despair, confusion, and ultimately dark (but beautiful) existential humanism.

I believe my need to re-interpret or distort my own reality is rooted in a fascination with darkness: it felt terrifying, yes, but to me it was also strangely beautiful. I suppose I’m fascinated by all those stories that lurk in the dark—those which require time and patience to bring out into the light.

My first photographic inspiration was the Danish photographer Jacob Holst, who became a household name in Denmark after travelling around the United States and producing a mammoth survey of all sorts of people. I remember being blown away by his pictures in my early teens. I was inspired, not by the technical skills or the talent behind the pictures, but by what made him able to work with his camera in so many different environments and to get so close to so many different kinds of people.

Besides him, there are, of course, many impressive and fantastic photographers. If I had to mention names, there are many: Diane Arbus, Antoine d’Agata, Nobuyoshi Araki, Miguel Rio Branco, Anders Peterson, Ferdinando Scianna, Alex Webb, Jerome Sessini, Dominic Nahr, Alex Majoli, Richard Kalvar, Jacob Aue Sobol, Boris Mikhailov and many, many others.

But more generally, I always find inspiring those photographers who are able to bring a camera in a room where not many cameras have been before. I am moved when a photographer gets so close to his or her subjects that you almost get embarrassed on their behalf. I also love it when pictures become mysteries, and you are uncertain about where you are, what is going on, who these people are.

Editors’ note: This aesthetically arresting series was selected as a series winner in the Portrait Category of the Magnum Photography Awards 2016. Discover more inspiring work from all 44 of the winners, finalists, jurors’ picks and student spotlights.