Book review
A Mycological Foray
Seeking solace from the multiple crises we are facing, many people are turning to one of nature’s most resilient entities: the mushroom. This publication takes us on a lush, multi-layered drift through the archives of a lifelong devotee—experimental musician John Cage.

From the archives of John Cage
Book review by Cat Lachowskyj

A Mycological Foray
Seeking solace from the multiple crises we are facing, many people are turning to one of nature’s most resilient entities: the mushroom. This publication takes us on a lush, multi-layered drift through the archives of a lifelong devotee—experimental musician John Cage.

I hate to start this essay like this, but we’re living in a fucking weird time. Over the past many months, as people have intermittently been forced to isolate in whatever homes they have, our concept of space, self-sustainability, and the many forms of foraging have shifted from twee aesthetic to an increasingly desirable form of subsistence. This shift has been so apparent that at the end of August, writer Sydney Gore published an essay in New York Magazine’s The Strategist titled “Why Are Mushrooms Taking Over My Social Media Feed, My Medicine Cabinet, and My Closet?” In her piece, Gore traces the use of mushrooms in pop culture, particularly within the art, fashion and wellness industries, proposing that we’re going through a collective interest in natural remedies. For me, there’s a tension in that influence, which tries to permeate capitalism while simultaneously working around its denouncement.

While it’s nice to have options at our fingertips, I’m not sure how I feel about an ‘informed’ company ethos attached to a high price tag—it reeks of spiritual bypassing. Our bodies, now forced to exist for extended periods of time in the same place, have pushed many of us to face the false promises of capitalism. When we’re distracted with work, hurtling our minds and bodies towards the next shift or deadline, we don’t have much time to consider alternative ways of living. Most importantly, we don’t have much time to think about the ways we need to radically shift our societal structures in order to have a chance at achieving necessary change.

Gore isn’t the first to highlight the mushroom’s relationship to capitalism. In 2015, anthropologist Anna Lowenhaupt Tsing published her book The Mushroom at the End of the World: On the Possibility of Life in Capitalist Ruins, an investigation into how the most valuable mushroom in the world—the matsutake—is a symbol of the endless contradictions we see in capitalism’s exploitation of nature. She asks, “What manages to live in the ruins we have made?” As millions of acres of forest burn around the world while hundreds of thousands of people die by a pandemic catalyzed by our destruction of biodiversity, indeed, what does remain when all this is over? What will be left when the systematic destruction of our planet, through colonization and the hoarding of wealth, only leaves us with scorched earth and more divisions?

The visualization of a mushroom sprouting despite these terrible conditions, stretching up out of decay and waste, feels like a hopeful symbol to cling to in the darkness that surrounds us—and maybe that’s the explanation for our pervasive obsession with them. By now, many photobook lovers have come across Atelier Éditions’ John Cage: A Mycological Foray, the imprint’s visual and literary take on John Cage framed through his love for mycology. Cage’s interest in mushrooms intensified during the Great Depression, when he turned to foraging for his own bodily sustenance—something he quickly realized was insignificant for substantially maintaining his energy. But from then on, his obsession continued, and was arguably part and parcel of his better-known career as a composer and educator.

While foraging in Upstate New York, Cage supplied a number of Manhattan restaurants with mushrooms for extra cash, and the funghi remained an integral component of his everyday life. The mycological process requires careful identification, understanding and intuition (something that Cage learned the hard way after almost killing himself by ingesting a particularly poisonous strain)—a flow state that simultaneously reminds you that you are one with the earth while floating just above it. As Cage explains, “The more you know [mushrooms], the less sure you feel about identifying them. Each one is itself. Each mushroom is what it is—its own centre. It’s useless to pretend to know mushrooms. They escape your erudition.”

But how did Atelier Éditions’ book come to be? Five years ago, in June 2015, an article of parallel themes appeared in the UK food-inspired publication The Gourmand. That essay, titled “John Cage: Devoting Oneself to the Mushroom,” playfully highlighted Cage’s mycological hobby, reframing the musician within the context of a magazine about cuisine. As a contributor to The Gourmand, and one half of Atelier Éditions, Kingston Trinder was bemused by Cage’s mushroom escapades. Years later, while living in LA with AE’s other half, Pascale Georgiev, he was reminded of Cage’s hobby while in the depths of a deep Wikipedia rabbit hole. In one of the footnotes on Cage’s sprawling page, Trinder noticed that the John Cage Mycology Collection was housed at UC Santa Cruz, close enough to where he and Pascale lived. “I said to Pascale: Why don’t we drive the fuck out there and check it out? Let’s see this mycological collection in the flesh.”

For many Cage obsessives, the artist’s interest in mushrooms isn’t unknown, often referenced in his own writings and other texts, offhandedly. But when Pascale and Kingston began interacting with the archive, they were immediately entranced by the sheer volume of mycological references and materials, institutionally denounced by a disregard for the topic in an organizational, collections-management sense. The thing about archives is, even when boxes are lucky enough to find an institutional home, the narratives excavated from the countless books, photographs, correspondence and ephemera are subject to the motivations of the human beings interacting with them. At first, the archivists didn’t think that Pascale and Kingston’s mycological narrative was so important, but as the duo dug deeper, everyone around them couldn’t help but also feel intrigued by their line of inquiry.

In general terms, Cage is known as a radical composer and fluid writer, full stop. And while Cage’s own writings exude a humble, stream-of-consciousness sensibility, writings about Cage can often feel like somersaulting through a bottomless tunnel of inaccessible theory. While his musicology was indeed revolutionary and avant garde, it was inspired by principles of accessibility and anti-establishment. Indeed, music is undoubtedly an integral part of the life and legacy of John Cage, but it was also one pillar in the foundation of a complex human. John Cage: A Mycological Foray offers insight into another material in the composer’s textured life: the mushroom.

The publication consists of two seemingly identical books; the first volume is a photographic and literary exploration of Cage and the mushroom, while the second is a reproduction of the artist’s Mushroom Book, a portfolio originally published in 1972 in collaboration with illustrator Lois Long and botanist Alexander H. Smith. “We didn’t set out on this project thinking about reprinting Mushroom Book,” explains Pascale. “So when we got the news that we would be able to reprint it, we were absolutely thrilled.”

Each cover is saturated in an earthy green, and the woodland tones throughout the pages, design, and casing act as a visual allusion to their main context. The typeface is a whispered tribute to psychedelic design trends of the ‘60s and ‘70s, which permeate our collective imagination of the magic mushroom to this day. There are also quirky nods to woodblock printing throughout the text, which remind us of the role of the mushroom in fairytales and fantasy. All of these visual cues come together to provide a collective, subtle reminder that mycology permeates so many different facets of our culture, sprouting up even when we aren’t necessarily looking for it.

After slowly going through the first volume a number of times, I realized that there are three image narratives woven throughout it: photographs of Cage, gleefully and meditatively foraging or doing other mushroom-related activities; mycological photographs that Cage collected for himself; and photographs of some of Cage’s pertinent ephemera. All three of these narratives are masterfully placed, so that each thread organically contributes to form a cohesive sonnet. This sequencing is the result of Pascale’s keen eye for visual narratives. She approached Cage’s archive with intense precision and a natural ability for excavation. In many archival books, a mixture of photographs and photographs of objects can feel jarring and slapstick, but here they flow in and out of each other, in paced conversation.

And then there’s the writing. Kingston is known for his playfully layered voice, also seen in Atelier Éditions’ other publications, and this quirky tone makes quite the appearance throughout A Mycological Foray. Where Pascale saturated the book in her understanding of the visual work, Kingston focused on Cage’s texts, collecting snippets from journals, correspondence, notes and published works—wherever mushrooms seemed to be mentioned. The result is a chaptered story of Cage’s relationship to mycology throughout his life and teaching, laced with a generous selection of direct quotes from the source material. Reading through the text can feel like mirroring the flow of Cage’s experimental music—a metaphorical, poetic nod that ties in their protagonist’s existing narrative, without cheesily bashing us over the head with it.

As an additional piece for the launch, the team reached out to a number of artists, including Jason Fulford, Ester Vonplon, Phyllis Ma and Thomas Sauvin, asking them to submit mushroom-related works to use as visuals on the backside of postcards, featuring recipes and more texts by Cage. For this broad collaboration, Pascale and Kingston also reached out to an aromachologist, who developed a bespoke scent that makes the postcards smell just like mushrooms.

At the admittedly high risk of sounding hyperbolic, this book feels like it was manifested at just the right time. Rather than putting our money towards $300-dollar t-shirts featuring psychedelic mushrooms to get our mycological fix, or splurging on a face cream infused with designer funghi, this publication reminds us that our relationship with our planet—its possibilities and complexities—is essential for rounding out a full life. If it suits us, we can wade through the exponential collection of opaque, dense theories written about Cage’s work, or we can appreciate him as a human being—a feature that tends to fall away from all of us with the passage of time. In an era of so much uncertainty, John Cage: A Mycological Foray reminds us that our earth, and indeed our mushrooms, are all we might have left in the end. We should start understanding them sooner than later. 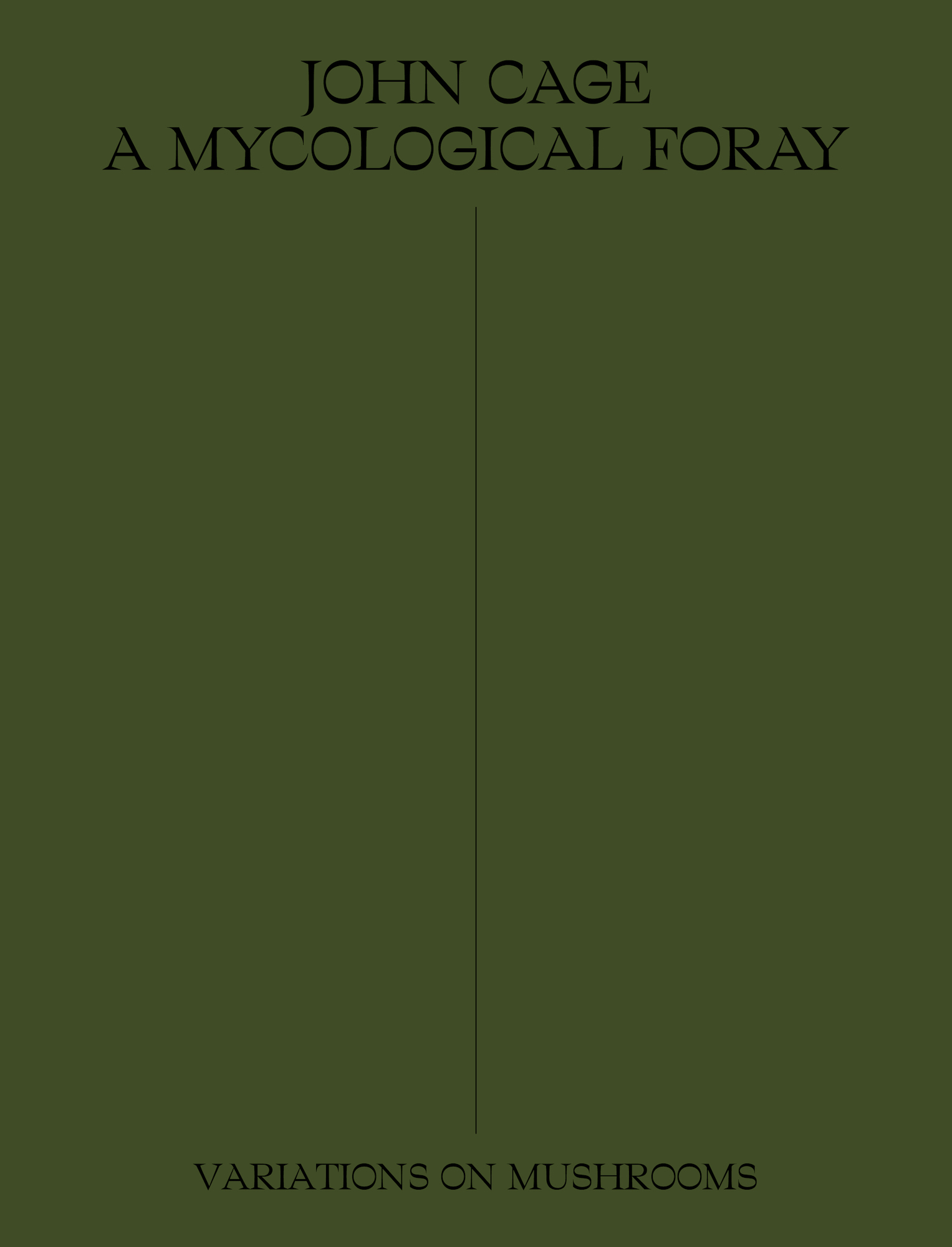