Book review
Surfaces
A surprising, at times even ticklish, pictorial study of the tensions and incongruities that present themselves in the “urban” landscape of Phoenix, Arizona.

Surfaces
A surprising, at times even ticklish, pictorial study of the tensions and incongruities that present themselves in the “urban” landscape of Phoenix, Arizona.

The history of photography as a radical picture making system can be defined as the history of the definition of new subjects. Sometimes these new subjects are extensions of ideas that exist in latent form in the work of exceptional photographers of an earlier generation. Sometimes they are genuinely primitive ideas mothered by a new technical breakthrough…

The series Surfaces, by Joseph Podlesnik, has recently been published in a book with the same title. Below, we excerpt from the book’s two introductory essays.

Surface Tensions
The photographs in this book were taken at a variety of locations in and around Phoenix, Arizona, the artist’s home since 2009. Joseph Podlesnik, a Wisconsin native who lived for many years in southern New Jersey, brings his own artistic sensibility to this series. Like the Swiss photographer Robert Frank, who documented American places and people with great acuity in the 1950s, Podlesnik may see Phoenix more clearly than those who have lived there longer.

I find a kind of “surface tension” in some of these images. A scientific term, surface tension is the force that causes the molecules on the surface of a liquid to adhere tightly together. We’re all familiar with the way water can rise above the top of a drinking glass and drops of water form perfect little spheres; those are examples of surface tension at work. When applied to painting, photography, and two-dimensional art in general, the term describes the conflict viewers experience when reading an image simultaneously as a two-dimensional composition on a flat surface and as the simulacrum of a three-dimensional space from the world around us.

Drawn to Photography
At the intersection of surprise and control, Joseph Podlesnik’s photographs partake in the candid, rapid terrain of street photography. Though largely implied, few feature the human presence the genre’s revelations often hinge to, which is unexpected since his figure drawings are so masterful. Analytical but expressionistic, their frenzied marks and encapsulating gestures demonstrate formal command of light, volume and space, but only after emotional output. Podlesnik’s photographs are instead refined and abstracted, as though he spontaneously yet prudently measured the minimal description needed to key identification and spatial orientation. Bold design oversees description. […]

Despite their stylistic and temperamental differences, Podlesnik’s drawing and photographic endeavors both track durable gestalts. As he drives around Phoenix armed with a discerning eye, an ever-ready digital camera and the searchlight theory of perception - seeking out images rather than waiting for them to appear - the skillful comprehension and organization of parts to whole intrinsic to figure drawing (particularly gesture) probably projects an anthropomorphizing lens onto his noticing. This “figuring out” habituation, how the right amounts of description, tension, and incompleteness sum up the human form, may be what determines finish in his photographs. Also implicating human action in this way - as in the one of a shed on a lawn, where clever framing makes an imposing form’s shadow, partly photographer, loom uncomfortably large - Podlesnik’s quick, calm sizing up leaves a trail of puzzling, pleasing encounters. 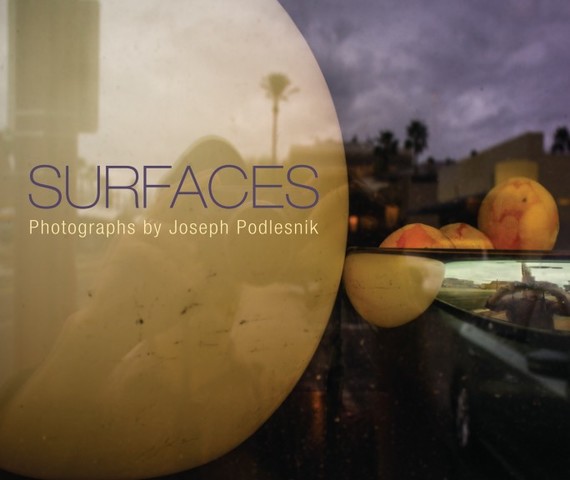