Vía PanAm
A photographic voyage from the far south to the far north of the American continents — jam-packed with insights, impressions, stories, and fact-filled graphics.

Although migration is as old as humanity, many people in Europe and the USA see it as a threat and a new phenomenon. Yet, the Americas are continents shaped by colonialism and migration. Generally, the indigenous populations have been either extinguished or displaced (Bolivia is the exception, with an indigenous population that forms the majority). The people of the two continents are mainly of European (or African) descent.

People move all over the continents. They are looking for work, a different life, a better life or fleeing because of conflict. Sometimes people cross a border in pursuit of these things; often they move to other regions in their own country.

While working on various subjects around the globe, Kadir van Lohuizen found that migration often played a role in many issues and in many different forms, be it climate change, war and conflict or economical issues. This inspired van Lohuizen to devote a project entirely to the subject of migration and to make a visual investigation of all its aspects. In creating the book Vía PanAm, Kadir van Lohuizen traveled a route from Tierra del Fuego in southern Chile to Prudhoe Bay, northern Alaska. The Pan-American Highway was the photographer's primary route, leading him over more than 25,000 kilometers and through 15 countries.

The book, like the journey, packs in a lot. In keeping with van Lohuizen's background as an investigative photojournalist, the book is filled with more than just photographs. Fact-filled text is scattered throughout the book's pages, covering such stories as coca cultivation in Bolivia, gold-mining in Peru, and illegal immigration into the United States. The book also includes a variety of graphics, tables, and information-packed maps, immersing us into the hours of research which accompanied the artist's long photographic journey.

Besides text, the book incorporates a variety of interesting presentation methods for its photographs. For example, full-bleed two-page spreads (both in color and black and white) are broken up by well-crafted, carefully thought out half page inserts. Some of the pictures are accompanied by extremely precise captions, including the coordinates down to the second. Some photographs have no caption at all.

Between the changing subjects, different modes of presenting information and variety of picture formats, the book remains consistently engrossing through its 432 fully-packed pages. Despite its length, the book never feels dull or ponderous or overly detailed. A 25,000 kilometer journey deserves a long narrative and van Lohuizen tells it well.

Like the best photojournalistic work, Vía PanAm manages to balance engrossing story-telling, objective data, a subjective, photographic viewpoint, and overall aesthetic excellence. Kadir van Lohuizen is an accomplished veteran of the field and his years of experience shine through. 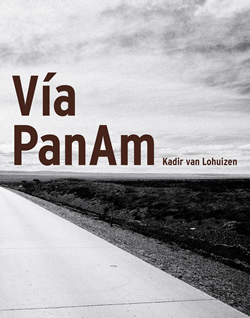