Book review
Less Américains
A self-published conceptual partial-erasure of Robert Frank’s seminal photobook draws attention to minute details in each photo, and has created some controversy throughout the photographic community.
Concept by Mishka Henner
View Images

Less Américains
A self-published conceptual partial-erasure of Robert Frank’s seminal photobook draws attention to minute details in each photo, and has created some controversy throughout the photographic community.
I wanted to find something I liked in this book. However, Mishka Henner's exercise with Robert Frank's classic seems more like a copy-cat prank and publicity stunt, rather than a true work of art. The only original idea is the cheeky title shift from Les Américains to Less Américains.

As Henner describes it: "Less Américains is a remake of Robert Frank’s classic photobook, The Americans. Eighty-three new images have been created by digitally erasing most of the visual content from Frank’s photographs, leaving only solitary details from the originals. The sequencing remains faithful to Frank’s 2008 Steidl edition of the book whilst the design of the covers and title pages are influenced by the first Delpire edition printed in France in 1958."

I'm not sure it's meant to be seen as provocative or an outrage or an excuse to be mentioned in the same company as Robert Frank, but Henner's concept would be just as good (or just as lame) had he merely described it in words.

While this project echoes (perhaps) Robert Rauschenberg's idea and realization of his Erased de Kooning sketch — that was a one-of-a-kind destruction or alteration of a one-of-a-kind piece of original art, which made Rauschenberg's statement even more meaningful, and forced a contemplation on the value of an original piece of art, and the value of art, period. And it challenged the idea of unintended collaboration.

Henner's project is not enlightening, however. I honestly tried to find something new and fresh here. Perhaps Henner would have made me notice a detail that would have enriched my appreciation of one of Frank's photos. But no, it seems mechanical, glib and, in the final analysis, a waste of time. In this case, Less is not more. 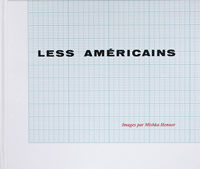