Book review
The Eyes of the City
A life-long New Yorker offers an “epitaph” to his many years of city living and through it, a reflection on the joys and stresses of urbanity for all of us.

The Eyes of the City
A life-long New Yorker offers an “epitaph” to his many years of city living and through it, a reflection on the joys and stresses of urbanity for all of us.

Not long ago I left New York City, my home of 39 years, to move to the heart of the Sonoran Desert. 20 feet from my door, I see urban palm trees, clay-tiled roofs, and mountains in all four directions. Richard Sandler’s book The Eyes of the City is a souvenir of what I left behind: the assaulting reality of living in heavily populated urban spaces. The images, made in New York City and Boston, are an emphatic reminder of the sharp edges of humanity lurking around every corner. Richard’s book is a journey that winds through 24 years of circumambulating airports, ferries, night clubs, up Fifth Avenue, down Madison Avenue, into the subways, inside and outside of political conventions and deep into the fraught core of civilization.

The Eyes of the City starts off with a timeless image made in New York City’s Grand Central Station; perhaps a metaphorical location that exemplifies how coastal urban centers are gathering points where people of all social and cultural strata convene. The next image depicts the former World Trade Centers forebodingly poised atop the shadowed edge of a freeway. From here, we plummet into the darkness of the subways.

As we move from images of a bleak underground world to a photograph of light pouring onto a paperboy bemused by the crucifix hanging on his neck in a Boston train station, the radiant tenor of the photo is quickly dampened by the macabre window looming behind his head. This transitional photograph, cloaked in an air of deceptive tranquility, becomes the logical gateway to witnessing the characters and injustices of Richard Sandler’s streets.

Because of the density of the spaces depicted in Richard’s frames, tension is rife: for example, children and families are forced into uncomfortable proximity with the pornographic advertisements that were a pillar of pre-Giuliani Times Square in the 1980s. Bystanders become inadvertently complicit in a narrative they are unaware exists. No one is spared exposure in Richard’s streets (not even my stern high school music teacher who I discovered on p. 55!).

Unlike many monographs made by street photographers, Richard’s poignant sequencing and the use of juxtapositions in spreads highlights the interdependency of his images. While he may not have been consciously aware of their connection at the time of exposure, his photographs become part of a dense network of interrelated thoughts and political concerns. At times, the sequencing is delicate and quietly suggestive; at others, the photographs unsparingly pound us with unnerving particulars that distinguish living in a metropolis from all other ways of life.

Indeed, in The Eyes of the City there is a relentless need to show the polarity of class and race that on a daily basis is thrust upon urban-dwellers. Richard’s unique photographic approach reveals his fierce compassion yet also his critical commentary; perhaps a result of frustration, he is occasionally damning of his subjects’ inability to ford the gap of class, race, identity or politics. Still, the photographs don’t always reveal his intentions or messages; some ambiguous moments left me feeling tense and at times sad, yet unclear if there was a single party to blame for the inequities. No matter, like a lot of great street photography, Richard’s work is at once political, aesthetic, and emotionally stirring.

Richard, with small moments of exception, offers us a vision of the dire circumstances, the brutality, the fear, and the inherent realities of being an urban dweller. People in Richard Sandler’s depiction of city life appear, by and large, to be surviving amidst cruel circumstances. The feelings are inescapable; even in the most forgiving of photos, the beautifully tritone-reproduced, thick black and white prints—rife with grit, grain and the texture of pavement and sooty subway surfaces—cast a pall of gravity over the scenarios. Whereas a street photographer like Garry Winogrand often adored his subjects or celebrated the inadvertent humor of life, Richard recognizes this levity yet rarely allows us to revel in it. Perhaps cities are just too exhausting. A feeling I quietly acknowledge as I close the book’s covers and head out onto my front doorstep to gaze upon the desert mountains.

Writer’s Postcript: After carefully studying Richard’s book, I wanted to know why he still lives in New York City. He answered, “I don’t. I live in Catskill, NY. The City has become far less interesting. If you’re rich, you can still go to the best museums in the world. But you don’t have to live there to take advantage of that. As the book was released, it coincided with me leaving New York. The book was my epitaph to my New York life. I’m just happy to get out, to be in nature more, and to be in the mountains.” 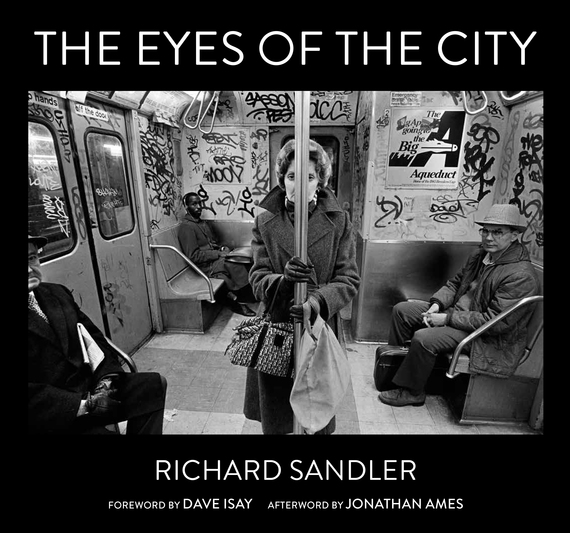 The Eyes of the City
Richard Sandler
Foreword by Dave Isay, Afterword by Jonathan Ames
Published by powerHouse Books