Book review
How We See: Photobooks by Women
In this new photobook anthology and touring exhibition, women take center stage in a tradition that has historically ignored their importance.

How We See: Photobooks by Women
In this new photobook anthology and touring exhibition, women take center stage in a tradition that has historically ignored their importance.

Born from a united interest in collecting photobooks and tracing their legacy and dissemination, 10x10 Photobooks was founded by three fervent enthusiasts — Olga Yatskevich, Russet Lederman and Michael Lang. After a panel discussion about their new publication at Shakespeare & Company in Paris this past week, Lederman sat down to speak to LensCulture about the history of their journey, and how it lead to their most recent publication, How We See: Photobooks by Women.

“10x10 is a collaborative group of three people,” Lederman explains. “We are three different generations — Olga’s in her thirties, I’m in my fifties, and Michael’s in his sixties. We are all collectors, and it really started as casual meet-ups — just us getting together to talk about photobooks. But then we realized that there was this larger community we could be a part of.” Together, the trio organizes public events in the form of salons and what they call “reading rooms” — touring interactive exhibitions of photobooks that invite viewers to sit and leaf through a curated selection of works.

Rather than placing the books in the confines of a vitrine, just out of reach of their audience, an emphasis is placed on the tactility of the objects. Lederman reflects, “There have been many photobook exhibitions recently, and one of the problems when books become rare and expensive is that they become untouchable. They get put behind glass. Some venues have also come up with page-turning video systems, or a kiosk, but it’s still not the same. At 10x10, our caveat is that the books must be accessible. It’s why we don’t include historical works, because if we put them behind glass, it thwarts our mandate. We want people to sit with a friend, together at a table, going through each book, talking, pointing at things, flipping back. A book is an object. It has a size, scale, tactility — and that’s the only way to look at it.”

In addition to this public programming, 10x10 publishes their own books based on specific themes that coincide with some of their major reading rooms. Past titles include American Photobooks, Japanese Photobooks, and Contemporary Latin American Photobooks: 2000-2016. But when the group met up for their regular catch-up at a bar in New York to discuss what title to pursue next, they decided to shift from their past standard of geographical focus. “We get together about once every six weeks, just to have a drink and brainstorm. It was actually Michael who came up with the idea for this book. He said, ‘I think we need to do a book about women,’ and Olga and I immediately said, ‘You’re absolutely right.’ That was about two years ago, and then it all escalated.”

Consolidated histories of the photobook have existed for some time, with perhaps the most seminal of these — The Photobook: A History, vol. 1 by Martin Parr and Gerry Badger – first published in 2004 (volumes 2 and 3 were published in 2006 and 2014, respectively). When the editors of How We See began their research on the representation of photobooks by women, they turned to these anthologies to generate statistics. “We expected a low percentage of publications by women photographers showcased within historically focused ‘books on books’ photobook anthologies,” they write in their introductory text. “However, we were unprepared for how disproportionate their underrepresentation would be – only 10.5% of the total of books listed.”

This prompted the editors to look into other realms of the photobook publishing world, and the numbers were just as bleak. Titles by females on three major publishers’ websites only amounted to 16.2%. The 10x10 editors then turned the mirror on themselves, and discovered they had subconsciously fallen into this same pattern with their own projects. “We discovered that our past three reading rooms and ‘book on books’ photobook anthologies also failed to adequately represent women, with only 22.9% of the books we highlighted by women.”

Subverting the standards engrained in the history of photography seems like an impossible task to tackle with a single publication, and the editors knew it would be difficult to trace this legacy of absence on their own. After all, photobook cultures exist in variation all over the world, and women are underrepresented in all these regions. In order to cover as many bases as possible, the editors assembled a group of ten women photobook selectors from ten different geographic regions, who selected their top ten photobook picks for their given territory.

Each selection is contextualized with a small essay by the given selector, who outlines their thought process behind formulating their list. As you leaf through the pages of selections, small descriptions of each work are accompanied by images of the cover and interior spreads, examining the materiality of each book. This focus on the book as an object is the perfect extension of 10x10’s mandate to approach publications as interactive entities rather than untouchable relics. As readers, we get a sense of what it must be like to hold the photobooks, whether they incorporate gate folds, accordion bindings or more classic structures.

As a prelude to this incredible range of selections, three essays provide perspectives on the troublesome erasure of women from the history of photobooks. “Partial Histories” by Kristen Lubben re-contextualizes Anna Atkins as the first photobook maker, and Isiuchi Miyako’s “Reflections on Photobooks” traces her own creative legacy as an important female photographer who emerged from Japan’s postwar scene of the 1960s. Finally, Valentina Abenavoli’s “Swaying Time on a Flatland” is a poetic essay on the personal process of discovering the importance of the photobook as a means of expression. In “Partial Histories,” Lubben writes, “One of the strengths of How We See is that each selector created her own governing rationale and criteria for selection, allowing for a range of approaches and producing results that are surprising and varied. In the end, this is the great contribution of the project: by shifting the focus, and creating a collective approach to constructing alternative histories, we can open up space for discovery.”

At the moment, all of the books featured in How We See have been curated into a classic 10x10 reading room, and will spend the next year touring to different cities all over the world. For the launch of this literary caravan, the editors decided to show the works at the New York Public Library in conjunction with the exhibition Anna Atkins Refracted: Contemporary Works — a lyrical nod to Atkins as the first ever photobook maker. As a public institution and tourist destination, the NYPL is not necessarily an art space, which feeds into 10x10’s mandate of knowledge dissemination. “We were in one of these beautiful period rooms in the main public library, and you have photography people coming through, but you also have tourists wandering in,” explains Lederman. “Some of them would walk in the door and immediately turn around and leave, but then you have tourists who walk in and think, ‘Wow, I had no idea that photography books existed, and I had no idea about the involvement of women in it.’ And they’d stay for hours. That’s when it’s the best — when it’s not just preaching to the converted. It’s touching this larger community that might not be aware of photography books.”

Of course, How We See is not a conclusive history of women makers. It’s a hair-pulling contradiction to claim that a concentrated selection of works can remedy over a century’s worth of habitual filtration. Rather, the editors hope the book can act as a model that prompts further fruitful discussion on the pressing topic, so that we might eventually reach a point where a distinction between ‘artists’ and ‘women artists’ is no longer necessary. “We want people to stop and think, ‘I’m putting together an exhibition, I’m doing an anthology, I’m creating a panel — but am I touching the different worlds of the photobook, the different sides of it? Am I including, or am I excluding? That’s all we ask. Question before you jump. Let’s make sure we’re being inclusive in this history. That’s what matters.”

Editor’s Note: Flip through the images in the slideshow to see more spreads from this incredible text, as well as the covers of some of the selected publications from all over the world. 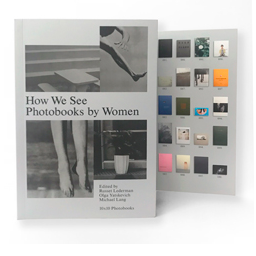 How We See: Photobooks by Women