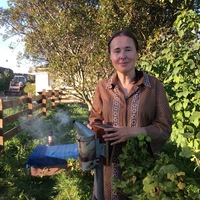 How can we picture the somewhat invisible relationship we have with our surroundings? Charting daily life in the depths of rural Iceland, Myth of a Woman captures the often ungraspable feeling of living with nature. Agnieszka Sosnowska’s quiet and reflective photographs depict this isolated existence with elegance and tenderness.

Born in Warsaw, Sosnowska studied in the US before relocating to East Iceland in 2005. Photography, and in particular self-portraiture, helped her form an intimate bond with the wild and unpredictable new landscape she found herself in. A counter-image to the frenetic pace of urban existence, photographing this radically different way of life could have become a spectacle for viewers to fall for the mystique of faraway lands. Instead, Sosnowska’s photographs are thought-provoking, dipping between the beautiful and the rugged realities of farm life.

In this interview, Sosnowska speaks to Rachel Wolfe for LensCulture about the process of adapting to a new environment, her relationship to self-portraiture and the Icelandic myths she draws inspiration from.

Rachel Wolfe: Your photographs convey a strong presence and understanding of your surroundings. In terms of your choice to emigrate to Iceland, do you think the desire to live closely with nature is often misunderstood?

Agnieszka Sosnowska: I think it’s often romanticized. I read Into the Wild by Jon Krakauer while visiting Iceland. That book was a huge influence in my life. I questioned what I wanted out of it. I knew I wanted to be with nature, not to visit it. Before making the decision to move to the countryside in East Iceland, I would share my plan with fellow Icelanders. The response from many was: “You are very brave.”

I believed that surviving New England winters had prepared me for anything. I was wrong. I thought I was tough. I was not. Winters in Iceland take on a whole other definition of: “Are you kidding, you can’t drive in this!”

RW: What was the process of adaptation like for you?

AS: When you live as we do, you have to become self-reliant very quickly. If you are not, then you can’t do it. Years back our water-source dried up. It was a very dry summer. We were not the only farm with this problem. Getting water from a nearby stream the entire summer to wash dishes, cook, flush toilets and wash ourselves got old pretty quickly. My husband surveyed our land, found a new spring underground, and spent months digging a new water system. The project was immense. The distance he dug was 1km away from our farm. He laid the pipeline from the new spring to our farm and created better water pressure. I was so relieved he had the skills to do this himself.

Currently we are in the process of replacing the roof of our farm. For years he has been acquiring the carpentry tools to work the wood himself instead of buying it straight from a hardware supplier. Living this way is both rewarding and exhausting. I think we both have a deep sense of pride when we accomplish a project. It is long, hard and often involves a lot disagreeing. I often say if you really want to test a relationship with anyone, build something together over a long period of time and see if you succeed.

RW: You’ve described your move to Iceland as a choice you could have never planned. Can you speak more about this desire and sense of ‘not knowing’, and how it relates to your work?

AS: In 2005, I married an Icelander and moved to a farm in the Eastern part of Iceland. This was not my plan. At the time, I had been living in Boston and working as a teacher. I have grown in three ways since moving to Iceland.

The first was becoming a wife and learning to compromise. The second was coming into my own as a woman. I have found strength and support from Icelandic women. This encouraged me to become confident and celebrate who I am, rather than apologize for it. The third was to be in a constant dialogue with nature. Living in place with frequent earthquakes, crazy wind speeds and the occasional volcano eruption reminds a person just how small they really are.

I met my Icelandic husband while on a three day visit to Iceland during Thanksgiving break. Iceland was not on my list of places to travel. My girlfriend’s daughter, who was turning sixteen, picked Iceland as the place she’d most like to visit for her birthday. I was asked to accompany them for the trip.

At the hotel in Iceland my friend´s daughter picked the most expensive day tour to experience. A snow mobile ride on top of a glacier. I was terrified and completely out of my element. The tour guide arrived to the hotel lobby to pick up the group. Four years later I married the tour guide and moved to Iceland. Needless to say it was a good tour.

RW: Did you ever miss your previous life in the States?

AS: My parents and I were born in Poland. We are first generation Americans. I emigrated to the United States at the age of four. Learning a new language, making a home, and adapting to a new culture far away from Boston has come with challenges and rewards.

Being an immigrant is perhaps the most difficult transition any human being can go through. Many times I wanted to just give up and return to the States. There is comfort in the familiar. Today I’m glad I didn’t. I have a better quality of life in Iceland. I have created a life I never imagined. It is mine.

AS: When I am photographing others, such as my students it becomes a ceremony. We set a date and a time to take pictures, we plan around an idea or a personal interest of theirs that we want to try to play with in the pictures. I then set a specific time frame that we’ll be working, between one and three hours. Often it’s what we’re doing together, rather than the picture itself, that becomes the end result. It’s the conversations that become a moment rather than the picture sometimes.

When I photograph myself I am impulsive with the camera. I might take a few items from my farm that I want to play around with to tell a story. One such thing was a reindeer skin. I was with my husband for his first reindeer hunt. It was pretty epic. To pull a 250kg reindeer down from the top of a mountain is impossible and surreal. That reindeer skin was part of our wedding ceremony. We exchanged vows on it. Many years later I was running around the farm with the skin trying to make a nude self portrait. My husband would go crazy watching me do this because tanning the skin cost him a fortune. He didn’t want to see it destroyed and rightly so. What was I trying to communicate? I had no idea.

I guess I was trying come to terms with a marriage that had nearly ended. We had been having problems. Perhaps by wrapping that skin around my skin I was searching for our union again. I was trying to connect with who we had become as a couple. When I put my myself in the front of the camera, I always ask, “What I am I trying to say?” “Is this genuine?” “How can I connect with my surroundings?” And most importantly: “What do I feel when I look at this picture?”

RW: Remembering and memory are two distinct areas your work always seems to touch on. Do you find the realm of the unseen informs to your photography? Are there other realms of creativity that you draw on to convey the experience of connecting with nature?

AS: Myths surrounding women in Iceland hold truth in poetry and song. None other have gripped my curiosity more than “Móðir mín í kví, kví,” an Icelandic poem sung in East Iceland. This poem tells the tale of a woman haunted by the death of her newborn child.

Throughout Iceland’s history women that bore children from circumstances that were not acceptable at the time would abandon the newborn to die in the wilderness. Perhpas they thought they would not be able to feed and care for the infant? Maybe they were shamed for the pregnancy? Maybe they were scared that their families, friends or society would dismiss them?

When faced with such choices these women would leave their newborns out in the wilderness to die of exposure.“Móðir mín í kví, kví,” tells of a woman haunted by the voice of her abandoned child and driven to madness by her choice. I cannot imagine the grief that consumed such women.

RW: How does this history and context feed into your own work?

AS: In my eyes the female spirit in Iceland encompasses strength and community. This strength has served as an inspiration in my life as an immigrant in this new land I now call my home. As a woman I am unable to bear children. This painful fact had affected my sensibility. In a way I connect with these Icelandic women and their sacrifices.

To have the ability of motherhood taken away from you by means out of your control can be consuming. This is why I started making pictures for Myth of a Woman. These self portraits are my myths. They are love, hope, desperation, and awe. They are my truth. Other ways I create art and connect with nature is through gardening. I take great pleasure in growing, planting and weeding.

My flowers and vegetables are a huge sense of pride.Often even more than picture making. Last summer we laid the foundation to a greenhouse we are building ourselves. Our goal is to finish it by the end of this summer. I cannot wait to stand inside it and know that we did it ourselves!

Editor’s note: We first discovered the magic of Sosnowska’s work when she participated in the LensCulture Visual Storytelling Awards in 2015. Since then, she has kept our attention with a stream of new work, a few of which have garnered even more awards. This project, Myth of a Woman, earned special recognition as a special Juror’s Pick in the LensCulture Black & White Awards 2019. You can see more of her work here in LensCulture, and also later this year at Photo London from May 14 to 17, 2020 where it will be shown by Vision Neil Folberg Gallery, alongside the work of Beth Moon and Jennifer Schlesinger.