I remember the first time I saw drawings by John Lennon: simple pencil sketches, self-portraits and renderings of others. They were fun; yet, to be honest, as art, they were nothing special. But hell, I thought. This is John Lennon! Anything that gave me some type of deeper or more complete access to who he was would hold my attention.

Likewise, there are a great many photographs of and by famous artists—artists whose reputations have little to do with photography—that cause every one of us to pause and look more closely. We cannot say the photos are any good, but we also cannot put them down. They open a door to something deeper, more humanizing, more real.

I have on my desk a new book published by MIT press: Ai Weiwei: Beijing Photographs 1993-2003. It’s a monster of a book—large and heavy—and just a few pages short of 400. There are 613 photographs throughout. The plain cover, open page design, introductory essays and concluding timeline speak gravitas.

But when I first opened the book, walking in a hallway toward my office, flipping through some of the pages to get a transient preview, I thought: Really? I was expecting photo art and I was not impressed. But when I sat down and started looking at the pictures, reading what they are pictures of, learning who the people are, I said: Really, again. And my tone was now one of fascination.

I’m tempted to say this is a book of documentary photography, but that would be wrong. Most of the photos are simply snapshots. There isn’t the intentionality that would make these documentary. However, they do record the artist’s life.

Beijing Photographs 1993-2003 is a follow-up to an earlier book: Ai Weiwei: New York 1983-1993, which I have not seen. As John Tancock says in his introductory essay to Beijing Photographs, “In both books the process of choosing was part of a much larger undertaking: the creation of a photographic archive in which the many thousands of negatives Ai had taken over the previous two decades, but not systematically arranged or printed, were placed in correct sequence and numbered accordingly. In years to come this will be an invaluable source of information for scholars…Once contact prints had been made from all 40,000 negatives, it was possible to start the process of identifying events, personalities and locations to the extent that this was possible.”

So—not documentary. An archive. That’s what this book is.

As Tancock goes on to say, “Beijing Photographs 1993-2003 is unique among photobooks produced by artists. A visual diary of a decade, it is an amalgam of photographs of a highly personal nature and others more public in interest…” In another introductory essay, Stephanie H. Tung writes, “…Ai Weiwei 1993-2003 is an autobiography in pictures…In selecting the images for this book, Ai gravitated towards photographs that were not compositionally focused or formally beautiful, but rather functional in relation to the unfolding of the overarching narrative.”

The essays, and an interview with Weiwei conducted by both Tung and Tancock, add quite a lot to the importance of the book for understanding Weiwei’s work and aesthetic. And then there are the pictures.

Ai Weiwei was short-listed for Time Magazine’s 2011 Person of the Year, and is arguably China’s most famous contemporaneous artist. His work, which includes architecture, performance art, sculpture, film-making and more, is angry, iconoclastic—emotionally or physically large. He co-designed the National Stadium, the “Bird’s Nest,” for the 2008 Summer Olympics. He made headlines around the world when he broke a Han dynasty urn for a photographic triptych, and when he took other Han dynasty vases and dipped them in industrial paint. He is also known for his “Fuck Off” photographs of his hand giving a middle finger to various iconic sites. He was detained by Chinese security forces for three months, resulting in international outrage. He is called a dissident—a social and political activist. The editors of ArtReview called him the most powerful artist in the world. Any summary is insufficient.

His work is loud and important. However, this volume is not a good introduction to Weiwei or his work, just like pencil sketches are not a good way to learn about a musician. But if you know Weiwei’s work, if you are looking for the open door that leads to that more complete space, this book is essential.

A great many of the photographs in the book are mundane out of context. There is an airplane wing over nondescript clouds. There is a ceiling light fixture. There are snapshots of friends and relations.

But a great many of the photographs are profound, too. There are photographs of Zhang Huan’s performance piece 12 Square Meters.

There are photographs of Weiwei preparing Whitewash, and many more.

Ai Weiwei: Beijing Photographs 1993-2003 is a book for fans and scholars alike. It is a diary, and so it has that insight which only reveals itself when you know the public story. If you know the arc of that story, the diary adds tenor, counterpoint and unexpected harmony, as well as dissonance. It’s a bit like reading the journals of important authors or looking at the sketchbooks of important painters—a bit like listening to recording studio outtakes. You don’t start there. But you get there as fast as you can. 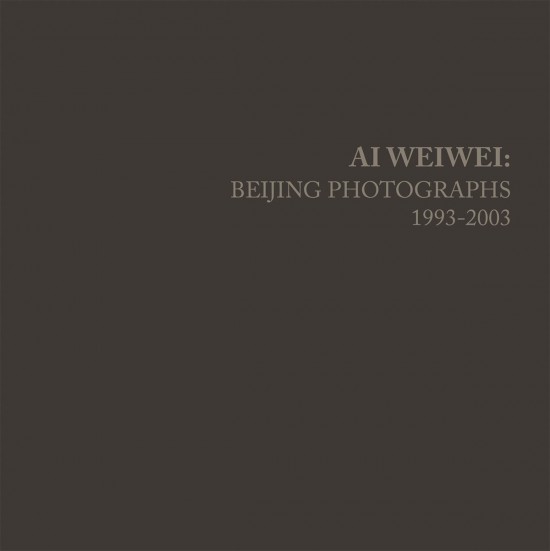