Book review
Slant Rhymes
A poetic and pensive tribute to the new publication from photographers and partners Rebecca Norris Webb and Alex Webb.

Slant Rhymes
A poetic and pensive tribute to the new publication from photographers and partners Rebecca Norris Webb and Alex Webb.

Rebecca Norris Webb is a poet and a photography virtuoso whose enigmatic images distill moments of silence and introspection. Her partner, Alex Webb, is a photojournalist and street photographer famous for his vibrant colors, exotic locales, and hard-edged decisive moments. Together, Rebecca and Alex have embarked on a new photographic duet, a book of sequenced images and texts titled Slant Rhymes.

The book pairs the couple’s photographs side by side, across facing pages. Some images come from the same location, like Havana or Brooklyn. Others are from worlds apart: Rebecca’s South Dakota joins Alex’s Haiti; his Istanbul is paired to her Indiana. Sometimes, the writing of one accompanies the pictures of the other.

The visual style of each photographer is as distinct as their prose. Alex Webb captures milliseconds of rushed urban bustle—Mexican youths playing in old courtyards; shirtless men in Havana milling about on the streets; women carrying buckets of water in India. His camera thrives amidst split seconds, multiplicity, movement. Miss the moment and the picture is gone, the limb lowered, the jump completed. Awash in bright, keyed-up colors, Alex’s photographs exhilarate with kinetic energy. They are visual equivalents of verbs frozen mid-sentence.

Rebecca Norris Webb brings an elegiac sensibility to the viewfinder. A sense of timelessness reigns over her images, which require the viewer to linger and let them open. People are rare in her work; animals and objects prevail. The inanimate speaks, emanating human meanings. Small details resonate with quiet symbolism: the wing of a bird, ripped cellophane hanging over barbed wire, fallen apples on gravel. Reflections thicken the visible into metaphors. In one photograph, a whale in an aquarium swims across the blue of a wintry sky, over the heads of humans that we can see in the glass. A barren tree branch scrapes the animal’s underbelly.

Like poetry, Rebecca’s pictures are self-contained and resist easy reading. Terse, they are dense with signification. A stuffed owl, slightly out of focus, perches against a mural of leafy trees. Among the painted branches are outlines of a room. Are these branches projected onto the walls? Are they double exposures? What is real in this picture? Forced to grapple with a multiplicity of its meanings, we fall into its dream world.

“Some cities slip off the map of our imagination,” writes Rebecca. “Others insist on living inside us—Havana, Istanbul, Brooklyn.” Her images have the latter’s insistence.

Slant Rhymes is not the first time Rebecca and Alex have engaged in a collaboration. In 2008, their joint portrayal of Cuba became a book Violet Isle. Six years later, Memory City was a celebration and eulogy for Rochester New York, the hometown of Eastman Kodak Company. What distinguishes their latest work is that it doesn’t explore a single theme or a place. Instead, Slant Rhymes contemplates the nature of collaboration itself—affinities between images, their creators, and ways of seeing the world.

Sometimes, the pairs of photographs are only riveted together by similar notes of color, like the red vinyl of a car seat and the red comb and wattles of a chicken. Often, the correspondences reside in geometry: the wings of a bird on a fresco and the splayed hands of a little girl holding on to the cathedral’s grating. Other juxtapositions form nascent montages. Meanings slither off the edges of pictures and braid. Two moments, not connected in time or place, hint at simultaneity. Together, cutting across maps and calendars, they unite into a testimony of journeys, partings and returns.

“A gift, this distance we’ve traveled so far,” writes Rebecca in one of her poems. The gift of that distance arrives to us as exhilaration.

Lev Feigin is a Philadelphia writer, flâneur and, occasionally, photographer. Born in St. Petersburg, Russia, he holds a Ph.D. in Comparative Literature from the CUNY Graduate Center and is an alumnus of The Writers Institute at the Graduate Center. 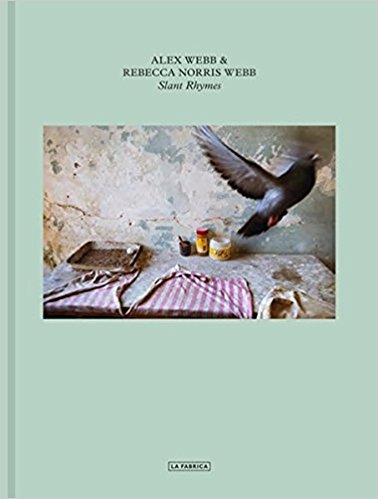