Ciudades del Este
Film negatives, like star light, carry direct traces of the past. This artful documentary series (and extended interview) offer insight into one man’s life-long exploration of his South American homeland. 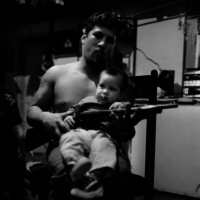 Alfredo Srur was born in Buenos Aires in 1977. He studied film production at the University of California, where he first came into contact with photography. For 15 years he has been developing documentary projects across South America. At Paris Photo 2015, he exhibited his series “Ciudades del Este” for the first time in Europe.

Managing editor Alexander Strecker reached out to Srur by email to find out more about his intriguing—and not internationally known—work. This is an edited transcript of their exchange:

LC: How did you first get interested in photography? What about it has kept you interested for all these years?

AS: When I was a young teenager, my goal was to study astronomy. Every time I looked at a star or planet in the dark sky, I was fascinated to think that I was looking directly into the past. Though light travels at 300,000 km a second, it still takes an unimaginably long time to reach the earth from the far reaches of our galaxy. I was so obsessed with how time and space affected the universe that I even wrote a letter to NASA…

I started making pictures of the moon when I was 15 years old. I also made pictures of the moons of Jupiter and Venus. But the 90s in Argentina were a difficult time. I was persuaded not to study astronomy since I would have no future in the country as a scientist.

Instead, by chance, I ended up adapting a short story that I had written into a short film. I was 18 years old and had no formal education in film or photography. But when we presented the work in a competition—we won! I realized that I should study cinema. I left Argentina to live in Los Angeles, California, and applied for a soccer scholarship at UCLA. I broke my knee and could not study or play football for years. That’s when I started taking photographs.

Maybe it’s about the feeling I have when I look at a star or a film negative and I know that the light I am seeing is from the past.

The same curiosity that pushed me to astronomy also drew me to photography. Maybe it’s about the feeling I have when I look at a star or a film negative and I know that the light I am seeing is from the past. In photography, it is even more explicit: the light that touched the silver emulsion and created an image does not exist anymore. But at the same time, it is there and I can see it. It’s a very strange feeling.

The deep interrelation between science and art in the field of photography has kept my curiosity alive after almost 20 years of work. I believe the act of portraying someone is like a revelation of human psychology.

For me, photography is strictly analogue. I do not have the same interest with digital media. I use digital cameras to make videos, but not photography.

LC: In your biography, you specifically describe that you work on “documentary projects.” What can documentary photographs tell us about the world? Why is it a good medium for storytelling?

AS: I have worked for the past 17 years exposing myself, psychologically and physically, to different scenarios and situations where I originally did not belong. These experiences changed the way I see my life. Despite my seeming initial disconnection from my subjects, I understood how deeply related I felt to them.

In my photographs, I try to translate these impressions into a visual world. Put differently, I convey my beliefs and experiences into images. I think I have been doing that since I was a kid, but today, I more consciously try to create my own language where my life and my work can speak together.

Each time I finish a series, I think it will be the last one made that way. I try not to repeat myself or fall into a good formula that always works. Up to now I’ve managed to accomplish that. To give an example, at this moment I think I am done photographing other people. I am now working with glass plate negatives from the 19th century as well as photographing landscapes related to early photography. My works represent a moment of my life that cannot be repeated.

LC: Despite your commitment to documentary, many of your works (especially those in colour) are classically beautiful and some will be hanging at Paris Photo (an art fair). What is the relationship between documentary photography and beauty? Between documentary and art? Is there any tension?

AS: I believe all photographs are documentarian. I am a photographer. I have been living from my work since I turned 21 years old. That means that at an early point, I had to face a difficult transition: from making works purely out of curiosity (without thinking about the commercial value), to eventually having my work exhibited at Paris Photo, in the heart of Europe.

Beauty could be a trap if it’s abused. But I don’t look for beauty; I just find it there sometimes. I try to reach beauty from a personal perspective—I mean, I need to love what I photograph and then I find beauty. But everything needs to be balanced. Beauty, sometimes, could separate you from what you see.

Also, I make sure to continue my relationships with the people I portray. I don’t just disappear from their lives. All the series that took me many years to complete were only possible because my subjects worked with me to make them happen. So now, I try to share the work as widely as possible.

Still, if I don’t make new works, it’s all right for me. I could probably spend many years only printing my earlier work, as I have been very productive and have a lot of material that remains unpublished. I could probably afford to stop and think about what I have done so far to get some more perspective. For example, as I said, I don’t feel like making more portraits at the moment. I try to respect those internal wishes as much as I can.

Sometimes I see myself as a traitor. But I know I am not. I like photography beyond my own pictures. I like to study photography. There is this old discussion about photography being a document or being art. It is probably both and that is one of the strengths of the medium. But maybe in the digital era, photography is losing its documentarian side.

LC: You said once in an interview that “Art is a convention.” Can you explain a bit more what you meant by that?

AS: For me, it is much easier to appreciate photography than art. While art needs social conventions to exist, I can simply hold a photograph in my hands. I need the object. I do not care if it is art or not.

Nowadays it is becoming clear that photography is a major art. But when photography was born, painters despised it. They had to use their hands to make a painting while photographers were just operators of a machine, they said. But that means that the definition of art (and social conventions) change in tune with the world.

LC: You work brilliantly in both colour and black-and-white. Can you describe the feeling that compels you to shot in one way or the other?

AS: The fact that I see the world in colour makes me want to shoot black-and-white—just to see how it will look, with no distractions. But this is like a bad habit.

Really, to shoot in colour, I need to be more concentrated. I need to think about the extra information that will influence my image in a critical way. It is a challenge to work in colour. “Ciudades del Este” is my favorite color work. I worked with 3 cameras: one 120 mm with color negatives; the second 120 mm with black-and-white negatives; and the third was a digital camera, just in case everything went wrong.

While I was shooting, my main focus was to work in color. But if I saw something that might work better in black-and-white, at least I had my second camera right there with me.

But in general, there are always different ways of telling a story. Sometimes I get fed up with black-and-white so I turn to color and vice versa. Sometimes I think some work will do better in color, and I go with color. But I am never sure of anything.

AS I was in Paris last year and I realized how distant we are. We are so far away in many aspects, geographically and culturally speaking. And that’s despite the fact that Europe has had a major influence in South America for centuries! You can see the effects in our law system, in our trains and infrastructure, our architecture; all consequences of European immigration.

But both continents see themselves as the center of the world—so there is a disconnection. It seems that there is no need for Europe to really know what is going on in South America. Each time there is a report about South America on European news, it comes is in a tragic way. The same happens in South America with regards to Asia, though. There is an “aesthetic of disaster” in photography that circulates all over the world, as if someone had said: “You should photograph misery this way or that way.” So, unfortunately, I think Europe doesn’t really know what is going on here.

Another problem, is that most countries in Europe have a strong nationalism. Or perhaps it’s more universal: it is not easy to step outside and see yourself from another perspective. But the fact I am being represented by a German gallery owned by the great-grandson of August Sander makes me think that there are exceptions. There are sensitive people that can see what most cannot and that makes me optimistic.

We need to have cultural exchange in a deep way. It is healthy to realize that there is not one center of the world. Also that none of us can choose where we are born. We all go through the same existential suffering, the same fears and happiness. We are much more alike than we think.