Interview
In Search of Objectivity in Photojournalism: A Lifetime Assignment
Hard-hitting journalism can touch on sensitive material: religion, ethnic conflict, political struggle—work that is made only harder (but richer) when the subjects are shot close to home.

In Search of Objectivity in Photojournalism: A Lifetime Assignment
Hard-hitting journalism can touch on sensitive material: religion, ethnic conflict, political struggle—work that is made only harder (but richer) when the subjects are shot close to home. 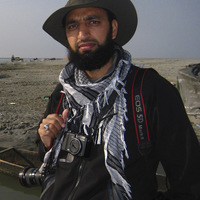 The highly decorated AP photographer Altaf Qadri started his career in conflict photography in Kashmir, his homeland. As Qadri was born an ethnic Kashmiri Muslim but raised in the Indian-controlled part of the region, he received good lessons about conflict from a young age. Later, he would become well-known for his coverage of the conflicts in Afghanistan and Libya, but his first experiences came early: “Being a photographer here in Kashmir is a struggle between the common people, the Indian forces and yourself.”

Later, what Qadri learned from the battlefields abroad informed his work closer to home. Today, he brings the high standards of conflict zone photojournalism into his every day work covering political and social life and also to his personal projects. Throughout his work, Qadri remains a detached witness more than an artist—his aim is to portray rather than express an opinion.

In his words, “From my perspective, photojournalists have to make work that is meaningful and strong, impactful pictures that can withstand the overflowing junk we see in social media.”

Altaf is now based in New Delhi whichallows him to pursue deeper projects back in Kashmir. LensCulture contributing writer Anna Akage interviewed Qadri to learn more about what it’s like to shoot in his hometown, discovering how layers of long-lasting conflict make themselves felt in myriad ways…

LC: Working once more in your native city, how can you see it clearly as a photographer and journalist?

AQ: There is always a notion that if you are covering your own war, you will be biased and unable to show the “real” picture. In my case, I feel I have remained objective, since my approach in my personal projects is to remain totally journalistic. No matter the events and participants, the facts are paramount. Across my work, I make sure there is nothing exaggerated nor hidden.

In Kashmir, the job of reporting is like treading a razor’s edge around the clock; one faces animosity and hatred from all sides. You are being judged every day, and if an arrogant security man chooses so, there is nothing that can stop you from becoming “collateral damage” in a war that has already consumed tens of thousands of lives.

The tussle between the media, Indian military and police in Kashmir has run for decades now. Journalists are intimidated and harassed while doing their job in an extremely hostile environment. Receiving the forefront of this oppression are the photojournalists and camera crew of various media whose presence is being frowned upon by the Indian troops. They accuse them of favoritism. After all, such visual journalists are more noticeable to the soldiers—they carry equipment along with them and any use of their equipment is not appreciated by the Indian army.

LC: Your project, “Kashmir: Paradise Lost” is more than a project—rather, it feels like a diary of a long-term assignment. How did you choose which photos to include in the final edit?

AQ: Kashmir is old and beautiful and really was a paradise once. Now, there is so much violence and has been for decades. But still, life goes on, in all its bloom of celebrations and deaths.

So, that’s my way of showing this country: I let every aspect of it be seen, side by side. What I saw while informing the world about this conflict—which has run over seven decades—is that not much has changed. Despite so many people working for peace, progress feels slow or non-existent.

LC: A burning component of the Kashmir conflict is religion. Your project on Sufism is about tradition as old as the city itself, revealing another key layer.

AQ: Kashmir has been very active in the sphere of Islamic education for centuries: numerous Islamic scholars came to Kashmir as early as the 13th century from Central Asia and the Middle East to spread a message of Islam. Today, you can still find Muslim shrines spread across the region, where many Muslims go to meditate and heal their disturbed bodies and soul.

Thousands of Kashmiris visit shrines and mosques every day to bring sanity into their lives and find private moments in a spiritual place. These visits bring calm into their traumatic lives. In fact, faith has become an important healing tool and Sufi shrines essential centres of psychological cure.

LC: Any story of international conflict is composed of small but tragic personal stories. These often form the basis of your personal projects. Can you say more?

AC: One of my projects in Kashmir is “The Lonely Mother,” about an elderly Kashmiri woman, Mughli, whose only son went missing in the custody of Indian forces after being picked up in 1991. Separated from her husband before the birth of her son, Mughli began a lonely search, for nineteen long years. Her life was filled with silence and solitude. Mughli breathed her last in the fall of 2009 without ever seeing her son again. Mughli was one of the several thousand women in Kashmir whose loved ones have disappeared, mostly after being detained by Indian forces.

That is a conflict told from the first person perspective: a big-scale event from an individual’s point of view. Another example: a woman I met in a dump near Delhi, when I was shooting a story about environmental pollution. The woman told me her sad tale: she came from Kolkata after fighting with her husband. He had never given her money to support the kids and used to beat her. The woman tried to get her children to safety and thought Delhi would be the right place. But the only job the city could offer was collecting recyclable garbage from the dumps.

As I followed her and went deeper into her story, things took a turn for the worse. Eventually, the horrible life conditions and the constant sickness of her kids forced her to go back home. I followed her routine in Delhi and then saw her return to the uncertainty in Kolkata…a small tragedy standing in for larger forces in the world.

LC: Your project “Hajj: Faith in Motion” was made in a noticeably different style from your reportages. What inspired you to take on this topic?

AQ: If we talk about Hajj, it is to show the personal affection, devotion and faith which brings people on this epic pilgrimage. Visually, I wanted to show the movement, the immense river of walking and praying. While I had seen many static pictures which showed the pilgrims, none of these gave the true feeling of this great performance.

So, for my work, I used a slow shutter speed to convey the immensity of the movement. For example, in one of the photographs, we see the Kabah in the centre and the pilgrims flowing around it like water. The feeling of the crowd was very emotional—this was my first time in Mecca. But as a journalist, I had to keep myself at a distance and do my best to ensure my presence wasn’t invading the privacy of my subjects.

LC: In that case, how do you feel about photographers who come from the outside? Do they make equally powerful work?

AQ: In the case of Kashmir, specifically, of course I’ve seen outsider journalists making great work. But still (even if this sounds a bit contradictory), there is always an issue with non-local journalists who are on assignment: they are there to work only for a brief period. In my case, the story has no limits—I belong to it.