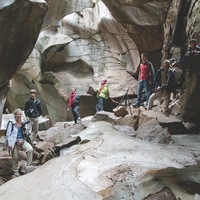 The Center for Advanced Mentored Studies at Anderson Ranch is a vital link in the education of emerging artists. Advanced students gain access to master faculty—top contemporary artists and educators—over a three-year period, providing rigorous inquiry and steady direction for their individual practice.

Recently, a trio of emerging photojournalists have been working with two veteran storytellers—James Estrin and Ed Kashi—to produce long-form projects on important, topical issues. Above, we have published samples from three of these projects. Below, short statements from each photographer about their work and an interview with mentor James Estrin on the present state of visual journalism and the importance of collaboration in the digital age.

Puerto Rico is a small island in the Caribbean that belongs to the United State but is not part of it. This political status, along with 500 years of colonization, has forged a cultural limbo. The island has a rich culture, but its people never quite know who they are.

By photographing the Puerto Rican landscape and daily experiences, I want to provoke discussion about the quest for our freedom, our identity and our future.

In the 140 years since the Canadian Indian Act became law, the resulting fracture of tradition has resulted in grievous consequences for the indigenous people: homelessness, trauma, poverty, racism, abuse, criminalization and addiction. But a Plains Cree prophecy, with specific predictions for each generation, says that while the fifth and sixth generations will continue to struggle, members of the seventh generation will regain their true identities as spiritual and sacred people. This story looks at the young indigenous members of the sixth generation, still marginalized but healing and looking hopefully to the future.

I left Baghdad with my family when I was 8 years old. For years, we tried to escape Saddam Hussein’s regime and come to the U.S. Finally, in the late 1990s we escaped to Jordan and after arrived in Syria. We lived for six years inside a Christian Orthodox monastery just outside of Damascus, before we were allowed to come to the U.S., to metro Detroit, where my father’s extended family lived. My family’s goal in leaving Iraq was like that of many others who come to the U.S. as refugees: they wanted to build a better life for their family and a better future for their children. My family’s decision to build a life in the U.S. has given me a chance to pursue my dreams.

My long-term project documents the lives and struggles of Iraqi refugees in the Detroit area as they face new challenges and opportunities. First, I started covering the Iraqi Shia community in Dearborn, Michigan. Some of the members of the community have recently arrived and others are refugees who escaped the Saddam Hussein genocide during the Post-Uprising massacres of 1991.

LC: The three projects that you helped direct were undertaken in radically different places, under very different circumstances. But I imagine as you worked together as a group, you found a lot of overlap. Can you discuss some of the common/shared challenges that each photographer faced and how you were able to help them overcome these roadblocks?

JE: Ed Kashi and I worked closely with Salwan, Erika and Amber. Both Salwan and Erika are working on projects where they have better access because of their backgrounds: Erika is from Puerto Rico and Salwan came to the United States as an Iraqi refugee himself. Amber, meanwhile, has successfully put in a great deal of time getting to know her subjects and gaining their trust.

Great work comes from time, passion and obsession. You have to have a story that you care passionately about to the point that you have no choice as to whether to do it.

In addition you have to spend the time and immerse yourself in the story and the lives of the people you want to document. It is only when you put in the time and gain their trust that you can do superior documentary work. This is what all three had in common, and what Ed and I strive for in the Anderson Ranch Mentorship program.

Besides meeting every July at the Anderson Ranch with the mentorship students, Ed and I also stay in close touch with each student offering both concretes suggestions and an empathetic ear. We work on the larger conceptual, editorial and story structure issues as well as the small practical steps that can make the difference between success and failure. Having mentors, and a community of fellow photographers in the workshop makes a big difference for our participants.

It is important to know that you have someone you respect in your corner, both rooting for you and making sure that you stay on the best path.

LC: Part of the brief of the mentorship is to “foster connections in our increasingly digital world.” Can you say more about how each of these projects achieved that and, furthermore, about how you think photography can take advantage of new opportunities for connection using the latest digital/social tools? I saw, for example, you personally started posting Instagram stories and giving yourself crowd-assignments. Just one interesting example…

JE: Both Ed and I are avid users of social media and believe that different platforms can be powerful tools to promote photographers and their photography. Several of our students are employing Instagram while they are working as part of their distribution strategies. Others are waiting until they are finished with their stories.

Erika has put out some of her images on Instagram to raise awareness of the ongoing crisis in Puerto Rico. Because of the sensitivities of the Arab refugee communities, Salwan is waiting until the work is completed before distributing it on social media. He is also gathering audio and video for future use. Amber is treading a middle ground, putting out a few select images while building her story.

I recently asked my followers to decide where I should go to photograph on an assignment for the Times. With the help of photo editor Kerri MacDonald, I made an Instagram Live story of my adventure. Generally, I photograph, write, make videos and also use social media to communicate my ideas. I want to tell stories in the best ways I can.

The digital world also allows for easily employing video and several of our mentees will rely on video to tell their stories. Kara Frame, another student in the workshop, is working on a feature-length documentary film.

LC: You’re an experienced mentor, offering your expertise to photographers in settings such as portfolio reviews but also in the extended format of workshops such as this. But not everyone can afford reviews and workshops—especially once intercontinental travel is factored in. What are some ways that photographers can seek out means of mentorship regardless of their location? Either through online opportunities or simply local means of support? So many photographers, I think, feel isolated in their work. What do you tell them?

JE: Everyone had to start at the beginning and everyone has learned directly from someone who came before them.

There is a tradition among photographers to help those who are younger or less connected. My advice is to use the opportunities to meet the photographers or editors who you admire. Workshops, reviews and attending talks can be useful but many people will even respond if you reach out to them with a heartfelt and detailed email.

Having a community of fellow photographers, whether in person or through the web and social media, is important. If there isn’t a strong photo community where you live, create your own networks and organizations.

Ed and I, and our workshop participants, have been able to create a very close and supportive community where we help each other as we pursue the work that matters most to us.

Erika P. Rodriguez is a freelance photographer based in Puerto Rico who focuses on stories of community and identity.

Amber Bracken is a photographer based in Edmonton who focuses on telling stories about the experiences of indigenous peoples.

Salwan Georges is a staff photojournalist at the Detroit Free Press.

James Estrin is a Senior Staff Photographer for the New York Times. He is also a founder of Lens, the Times’s photography blog and has been it’s co-editor since it went online in May 2009. Mr. Estrin has worked for the Times since 1987 and was part of a Pulitzer Prize-winning team in 2001. He is also an adjunct professor at the City University of New York Graduate School of Journalism.

To learn more about the photography workshops offered at Anderson Ranch, visit the center’s website.