Book review
The PIGS
An award-winning photobook, The Pigs echoes the design and form of “The Economist” to deliver photoessays of real situations in four countries suffering in economic crisis in the EU: Portugal, Italy, Greece, Spain — referred to by the financial press with the disparaging acronym PIGS.
Photographs byCarlos Spottorno
View Images

The PIGS
An award-winning photobook, The Pigs echoes the design and form of &#8220;The Economist&#8221; to deliver photoessays of real situations in four countries suffering in economic crisis in the EU: Portugal, Italy, Greece, Spain — referred to by the financial press with the disparaging acronym PIGS.

"As tourists flock to Southern Europe to photograph the beautiful decay of antiquity, Spottorno zooms back to show a foreground of contemporary cultural decline that invariably rivals the romantic view in visual extravagance. The Pigs is a hysterically devastating portrayal of a culture at a crossroads."

The term "PIGS" was coined by the financial press as a shorthand for Portugal, Italy, Greece and Spain during the height of their respective financial crises. The term was happily adopted by neoconservatives, eager to jump on these countries for their perceived laziness, corruption and disregard for the insatiable pace of modern capitalism. It was eventually taken up by the mainstream media as well, used without consideration for the pejorative implications for over 100 million people, who were suddenly reduced to the lowest of domesticated animals.

Photographer Carlos Spottorno, whose first career was in advertising, aims to illustrate the PIGS stereotype through images — "Portugal, Italy, Greece and Spain through the eyes of the economists". The Pigs plays with image from the book's cover, modeled on The Economist, to its back page, a fake advertisement for "WTF Bank".

Within, Spottorno's photographs contrast these countries' proud histories with their less glamorous contemporary realities. Ancient monuments are protected by broken gates, flea markets appear under the shadow of marble masterpieces, and clothes hang-dry in the happy sun against the backdrop of inner city decay.

By focusing so heavily on one tiny aspect of these complex, beautiful places, Spottorno reduces the "PIGS" label to what it is: a gross simplification. And yet, his images also contain pieces of the ancient past, which evoke how the residents of these countries hold idealized views of their own glorious roots. Spottorno deftly handles these contrasted extremes and shows how these countries are stuck: are they the cradles of Western civilization or the ruin of modern Europe? Both, perhaps, but neither tells us what should be done in the here and now. 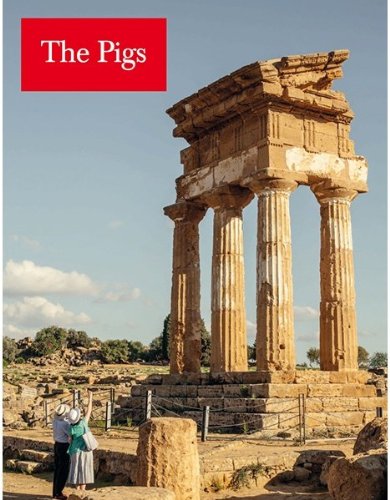