Perhaps the best parts of the book are the long, well-written, insightful essays by Anne Wilkes Tucker and Karen Sinsheimer, along with the timeline, “Chronology: A History of Korean Contemporary Photography”, compiled by Bohnchang Koo. They provide the all-important and necessary historical and cultural contexts that enable people living outside of Korea to approach these often enigmatic works in a more imformed way.

The photographs that were chosen for inclusion, however, do not seem to be representative enough for us to begin to grasp some of the current tendencies in Korean photography. The examples presented here in this book, and in the exhibitions, seem oddly disjointed and almost arbitrary.

It’s frustrating that the curators felt limited to choosing a mere 40 photographers (usually only one image per photographer) to represent the current state of art from this part of the world. As someone who is truly eager to comprehend what is going on in the Korean contemporary photography scene, I clamor to see more — more examples from each photographer, and work from more photographers. I want to see a selection that is complete and complex enough to allow me to start to make some intellectual connections of my own. As it is, this book feels like an unsatisfying, teasing sampler of work that deserves perhaps five times as much material to become a meaningful resource.

I hope someone takes up the challenge to assemble a truly comprehensive overview of Korean photography. 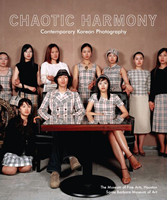