Feature
The Middle Landscape
A visual exploration of the distinctly American, industrial version of “the pastoral”—examining how human innovation impacts our natural spaces.

Photographs and text by David Bernstein

The Middle Landscape
A visual exploration of the distinctly American, industrial version of “the pastoral”—examining how human innovation impacts our natural spaces.

There is an image I like to show my environmental history classes at the beginning of every semester. It acts as a sort of litmus test to gauge their attitudes towards the subject matter we will spend the next fifteen weeks examining: human interaction with the natural world. 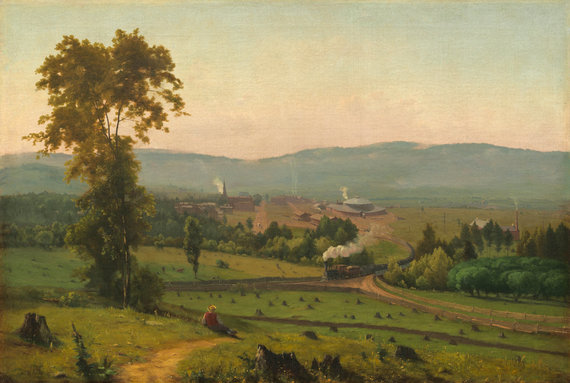 George Innes’ 1856 painting The Lackawanna Valley [above] depicts a pastoral scene with a lone figure lounging in the foreground, gazing at a relatively innocuous roundhouse and railroad in the middle distance. The railroad’s innocuousness is questioned, however, by a nearby stand of trees that have been reduced to stumps—presumably to provide material for the railroad. Whether my students see sublimity, nostalgia, pro-industrial boosterism or a lament for destroyed nature tells me a lot about where we are beginning our journey.

This series builds on Marx’s assessment and pushes it to its extreme. Capturing graphic and clean scenes of the “natural” world, I create a calm space for the viewer to enter. Yet by placing the focal point—sometimes banal, other times more sinister—in both the middle of the scene and in the middle distance, I ask the viewer to take the place of the lounging figure in Innes’ painting and contemplate his relationship to his surroundings.

Editors’ Note: David Bernstein is a member of the LensCulture Network, a recent initiative we launched with the idea of offering talented, accomplished photographers a place to showcase their work on a global stage while also giving them a place to share, learn and engage with one another. The LensCulture Network began with a small number of hand-picked members, and we are very excited to watch it grow and evolve.

If you enjoyed this article, you might like one of these other features: The Stateless, Placeless Desert, a series on the relationship between body and home for Iranian refugees; Überblick: California Skies, a three-part series that turns man’s impact on the landscape into sweeping, poetic vistas; and Belgopolis, a reincarnation of the familiar terrain that surrounds us.