Photographs and book by David Denil
Text by Cat Lachowskyj

Let Us Not Fall Asleep While Walking
Surreal, saturated imagery of the Ukrainian Revolution combined with archival materials and personal stories tell real stories of life during war today — a new, relevant photobook to savor.

In 2013, protests broke out across Ukraine in response to President Viktor Yanukovych’s decision to break ties with the EU to form a tighter economic relationship with Russia. The following year, these protests escalated, resulting in the 2014 Euromaidan Revolution, catalyzing Yanukovych’s removal from office. Ukrainian citizens, whose national identity is fraught with the longstanding threat of Russian dominance, pressed for a new government to be established—but this advocacy only resulted in further unrest. While the Euromaidan was lightly covered in press outlets during its initial manifestation, its narrative has since been lost in the endless stream of pressing world news. But five years later, in 2019, the war is still happening—and lives are still being lost.

Photographer David Denil’s series LET US NOT FALL ASLEEP WHILE WALKING has garnered widespread acclaim for his ethereal approach to documentary storytelling. The narrative that Denil presents is real, but his visualizations are cinematic, packed with symbolism and allegory. This oversaturated world touches on the surreal experience of living in Ukraine in the wake of unrest. Denil explains, “My intention is to bring awareness about certain people’s lives by using the single frame to build up a narrative. I use photography as a tool to perform research instead of providing answers. As social realism depicted the Soviet past of Ukraine, I extended this visual approach to depict its present, which is still strongly connected to its history.”

Across portraits, still lifes and studio shots, the fluidity between scenes is maintained by Denil’s intense lighting and bold saturation. These people are real—not invented characters—trekking on despite violent unrest, finding magic and hope in everyday moments. While two children push together identical mounds of sand at the beach, a woman lays wounded in an abandoned structure, surrounded by concerned friends. All of these moments feel like strange film stills, but they are real moments, alive and happening in a peculiar place and time.

Denil’s photographic story has been recognized through a number of awards and publications, prompting him to take the next step in contemporary photographic practice: compiling a book of the work. Together with Dewi Lewis Publishing, he has created an incredible dummy that incorporates other sources and materials, elevating his images to a substantial, weighty and comprehensive narrative. 2019 marks the fifth year of the war in Ukraine, and Denil has sequenced 142 images across the pages of his book—an ode to the 142 victims who have lost their lives throughout the Revolution. Alongside Denil’s images are a number of archival newspaper and media clippings, which the photographer says “strengthens the exploration and experience of the sociopolitical impact of this war on society.”

The dummy is a solid creative resource, boasting 448 color pages and a number of interesting interpretive texts, including an introduction by author Oksana Zabuzhko and smaller essays by other relevant contributors. There are still a few days left to donate to Denil’s cause through his crowdfunding campaign, and once the funds are raised, the editions are set to be printed in Ukraine. Denil is providing individual prints to those who generously provide donations, and in the first edition of the book, he is incorporating 75 photographic collages. These additions include spoken and written testimonies from the family and friends of the Revolution’s victims. While Denil’s images stand powerfully on their own, they are brought into a crucial conversation with both the clippings, archival sources and direct voices in this work, making LET US NOT FALL ASLEEP WHILE WALKING as historically important as it is creatively exploratory. 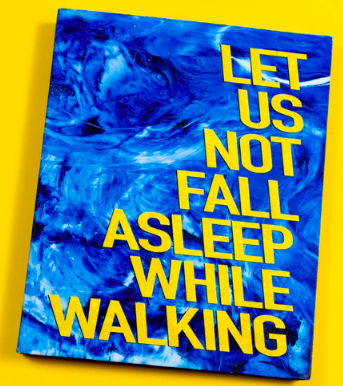 LET US NOT FALL ASLEEP WHILE WALKING