Book review
TJ: Johannesburg Photographs 1948-2010
David Goldblatt presents old and new photographs of Johannesburg, in chronological order. His quietly perfect pictures, accompanied by spare, telling captions, show how little things have changed since 1948. Indeed, in many ways, things may be worse now than ever before.
Photographs by David Goldblatt
View Images

A novel, Double Negative, written by Ivan Vladislavic, is quite brilliantly packaged together with the picture book. Its narrative fiction echoes and reinforces many of the ideas, observations and frustrations that Goldblatt's photographs communicate. The first-person narrator of the story is a photographer in South Africa...

In real life, David Goldblatt has been photographing and documenting South African society for over 50 years. Born in Randfontein in 1930 to parents who came to South Africa to escape the persecution of Lithuanian Jews in 1890, he was simultaneously part of privileged white society and a victim of religious persecution and alienation. Motivated by his contradictory position in South African society, Goldblatt began photographing this society, and in 1963 decided to devote all of this time to photography.

Goldblatt focuses on critical explorations of South African society. While he uses photography as a means of accessing and exploring people and societies, David Goldblatt is acutely aware of the ethics of photography, and has used the camera as a way of capturing the complexities and intricacies of the specific conditions and situations that he photographs. His photographs are neither propaganda nor violently provocative, but rather become far more complex, meditative documents that are open to interpretation and that permeate far more deeply, and for longer than the initial shock and violence associated with documentary and news photography.

“One of the most damaging things that apartheid did to us,” Goldblatt says, “was that it denied us the experience of each other’s lives. Apartheid has succeeded all too well. It might have failed in its fundamental purpose of ruling the country for the next thousand years in that fashion, but it succeeded in dividing us very deeply and it will take a long time to overcome that.” This deep-rooted division is further exacerbated by a continuing social and urban fragmentation. While TJ includes old black and white photographs from an earlier era, new works explore the intricacies of crime, housing and poverty in Joburg.

Art critic Ken Johnson writes that the “effect of Mr. Goldblatt’s understated, anti-sensational photographs and the spare words that accompany them is cumulative. They build into an infectiously mournful beauty. Even in pictures that seem almost nondescript… Mr. Goldblatt’s compositions have a classical elegance and a reticence that speaks volumes.”

Special thanks to Goodman Gallery for their eloquent contributions to this text. 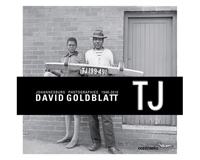