Behind the Lens: Taylor Wessing Prize Winner 2014
While the prize-winning image beautifully captured a moment of pure innocence centered on the photographer&#8217;s baby son—David Titlow&#8217;s full portfolio bursts with variety and imagination. Come learn more about this talented, multi-faceted artist. 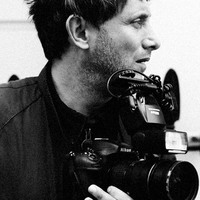 The Taylor Wessing Prize—considered to be among the premier portraiture prizes in Europe—recognizes excellence in contemporary photography. While the widely-held understanding of portrait work can be fairly staid, conjuring a mental image of bland studio backdrops and a straightforward pose, David Titlow’s portrait of his baby son ran contrary to this cliché conception of portraiture, winning the 2014 Prize.

Looking through the gallery of previous winners, Titlow’s Konrad Lars Hastings Titlow certainly stands out. While the composition and lighting feels comparable to classical painting (Rembrandt, for example) the image was completely unstaged. The photograph depicts the morning after a midsummer party in Sweden, when a chance meeting occurs between a baby and a dog. The light filters in to illuminate three party guests seated on the couch, surrounded by scattered beer cans. Baby Konrad reaches out to touch his new friend’s nose, his eyes filled with wonder.

“It was a candid shot that appeared before me, and I had my trusty Lumix GF1 at hand to record the moment. I had to adjust the ISO quite quickly to a low setting in time to get the best shot without too much noise. I was sure I had something special and I wanted to make sure it would print okay.”

As a former member of 80’s pop duo Blue Mercedes, and later the 90’s indie rock band Heave, Titlow initially focused on music, rather than photography. However, inspired by the lighting, styling, and choice of models in early work from David Sims and Corinne Day, as well as early experimentation with film photography, Titlow found himself switching careers to focus on fashion and advertising photography.

“I was attracted to the spontaneity and instant result of taking pictures–especially learning the dark room process with black and white film at school. My American auntie gave me an old polaroid camera in the 70’s, and it blew me away. I could shoot something and look at it–in black and white–after 30 seconds!”

Portrait photographers are arguably more dependent on their subject than other genres in the medium. Creating a captivating image is inextricably linked to the subject…in this case, an individual and their ability to convey their charisma in a still image. That is why portrait photographers and their subjects are inextricably linked—why we think of Anton Corbijn and U2 in the same breath. But rather than following the work of portraiture greats, Titlow’s own outlook is focused on the present—and the future. Looking at his work, his approach has produced undeniable results.

“I like making people move about in the studio, and get comfortable with themselves in what can be a sterile, scary environment. I really want them to like what they see, but ultimately the subject is the image. I can make the lighting good, or create atmosphere, but ultimately the person is either a great subject or not. How can you take a bad picture of Patti Smith?”


Editor’s Note: David Titlow will present a talk and audience Q+A on June 25, 2015 at theprintspace gallery in London. He will speak about his Taylor Wessing prize-winning image and his photographic approach, influences and inspirations. Places are free of charge but space is limited. RSVP here to secure your place.

Now open for submissions, the Taylor Wessing Prize encourages photographers from around the world (aged 18 and up) to engage with the form of portraiture and send their best work. With a chance to show work in a special exhibition at London’s National Portrait Gallery, the Prize often attracts some of the best portrait photographers in the field. You can learn about how to enter the competition through this intriguing offer from The Print Space.