Book review
Welcome to Camp America
A startling new book about human rights atrocities at the U.S. detention center at Guantánamo Bay—and an interview with the photographer who brought these stories to light.

Welcome to Camp America
A startling new book about human rights atrocities at the U.S. detention center at Guantánamo Bay—and an interview with the photographer who brought these stories to light.

A new book, Welcome to Camp America, greets us with its ironic title and a gut-wrenching cover image: a picture of a grimy, white luxury recliner chair situated awkwardly in the disturbing corner of a cinderblock room, a dungeon really, with ankle chains bolted to the concrete floor in front of the chair. The location is known as the “Compliant Detainee Media Room.” This odd juxtaposition of implied comfort and forced restraint—make no mistake, these are prisoner’s shackles—sets the tone for what lies ahead.

This is a story about the Guantánamo Bay detention center—a quasi-legal prison and interrogation camp established in response to the terrorist attacks of September 11, 2001. The U.S. government has made it very difficult for journalists (or anyone) to see what is really going on in the place—activities that George W. Bush referred to as “enhanced interrogation techniques” of “enemy combatants,” or, as Barack Obama admitted quite plainly and with much less jargon, “We tortured some folks.”

Photographer Debi Cornwall waited for a long time to get permission to visit and photograph at Guantánamo. After working her way through endless red tape and resistance, she was permitted to visit on three separate occasions. She was persistent in her efforts and determined in her research. She made many telling photographs, and uncovered important facts, documents and personal stories about the place. She also followed up on the fates of men who had been detained there for years, without charges, and later released. The book she has compiled is riveting.

The “story” is told in layers, and it comes across as a mystery (or several mysteries) to uncover. The opening sequence of images and declassified, redacted government documents seduces and teases, like the opening of a horror-suspense film, with a series of memories, flashbacks, glimpses of evidence and obstruction. Then a page folds out—an “official” document, formerly stamped CONFIDENTIAL, that still hides more than it reveals—covered with precise black marks to censor much of the information that had been printed on the page. However, what we can see is clearly disturbing. We are being given incomplete, government-censored pieces of an elaborate puzzle, one piece at a time.

Slowly, though, vague stories begin to clarify, emerging from the fog, and become frightfully real.

The book is like a dossier, a file of criminal evidence, interviews, interrogations, testimonies, reports, photos. The language of the declassified documents is often cold, clinical, removed from any sense of humanity or any acknowledgment of human suffering. The testimony of people who were victims of cruel violence is horrifying; the extreme different points of view are mind-numbing. The photographs reveal a bizarre, absurd-looking reality swimming in contradictions. Random quotes appear throughout, like this anonymous statement: “All things considered, I am proud as hell at the restraint demonstrated by the interrogators I worked with.”

The book contains 14 loose-leaf inserts, with oblique portraits of former detainees, and their stories printed in both English and Arabic. Other pages can be folded out to reveal redacted documents and recorded testimony. Incongruous images of everyday life at Camp America are presented throughout the book—bobble-head dolls and souvenir-shop tchotchkes, metal chairs on wheels with restraining straps, plastic cases of hypodermic needles, American creature comforts for the service men and women who work there, and recreation places (for the military) that look like amusement parks with all of their garish and obvious attempts to create illusions of fun, fantasy and happy days.

The text in the book is spare…and devastating. It describes inhumane treatment, torture and explicit intentional violence. And it hints at even worse atrocities. Three quite different and compelling essays at the end of the book help us to grapple with the images and information we’ve just tried to absorb.

When you’re finished, you close the covers and put down the book, exhaling a long low sigh. You feel numb. The world is a dark place, with no easy answers or quick solutions to our worries. This book won’t make you happy, or lift your spirits, but it is important, and we highly recommend it.

Here is a short interview with Debi Cornwall, the photographer and author of Welcome to Camp America:

LensCulture: You had to overcome many obstacles and limitations in the making of this book. Can you talk about some of the biggest challenges you faced? Do you think that working with and through those limitations that you have made the story stronger in the end?

Debi Cornwall: The military imposes dozens of rules as a condition of visiting Guantánamo Bay to make pictures. I wasn’t trying to break any rules. Just the opposite, I wanted to work within them and look at what I was being asked to see.

My biggest challenge was the “no faces” rule. Even a partial profile would be deleted in “Operational Security Review.” It made for some strange habits after I left, but became the basis for my collaborative portraits with former prisoners after they had been cleared and released. Their bodies are free, but Guantánamo Bay will always mark them, whether in the trauma that persists after having been imprisoned for years without charge or trial, or in the roadblocks they face in reentering society. And not everyone released was allowed to go home.

So, for example, I photographed Hussein, a Yemeni living in Slovakia, and Chinese Uighurs living in Albania. Imagine being dropped into one of those countries, not knowing anyone, not speaking the language. Replicating the “no faces” rule in the free world was also a way to give viewers a sense of the disorientation of life after Guantánamo.

LC: Who do you see as the audience or readers of this book?

DC: Welcome to Camp America should be of interest to any concerned citizen. It’s about Guantánamo Bay but the issues it confronts are not unique to the United States. I’ve exhibited and lectured about this work in the U.K., Germany, Switzerland, China and Korea, and each time audiences find this work relevant to issues facing them at home. The questions the book is posing–who do we want to be in the era of the “War on Terror,” and what are we doing to ourselves—are unfortunately, universal.

LC: Why the two languages?

DC: It’s important for me to be in conversation with those most impacted by War-on-Terror policies, so I knew from the beginning that the book had to be in Arabic as well as English. If we could fund it, I’d also love to publish a French edition since these questions are very real in the Francophone world. Using Arabic text is also a subtle message to English speakers: we are part of a larger world, we are all connected.

LC: How do you want people to respond to the book? Do you see this as a call to action and activism, or is it more about raising awareness?

DC: When I first showed this work at Photoville in 2015, a woman confronted me outside my exhibit. “What’s the point of this?” she demanded. “It’s about inviting us to look at Guantánamo Bay,” I said. “Why should we look? I just wish we could kill them all,” she said, and walked away. It was a powerful moment. What I heard was pain. At some point, though, can we hold our grief and also look at the reality of actions taken in our names? What will become of us if we cannot bring ourselves to look? The book is an invitation to look.

I was a civil rights lawyer for 12 years and will always be an advocate. But Camp America is a very different kind of advocacy. I’m not making a case so much as looking to evoke a visceral reaction that sparks new inquiry, a different kind of conversation, and perhaps new alliances. What do we have in common with those who are different, with those we fear? What is it like to walk in their shoes, whomever “they” are to you? No matter what you believe and no matter whom you voted for, this book should surprise you.

LC: It’s a complicated story, with many different points of approach. Can you talk a bit about your decisions that helped you arrive at the final design and layout for the book?

DC: Camp America builds meaning with many elements: three series of photographs, archival material, and text–excerpts of a sworn statement from an actual court case. With such a layered project, the choice of a designer makes all the difference. David Chickey, co-founder of Radius Books and Camp America’s designer, knew that the design had to advance the concept. We worked on it together closely.

I wanted the book to be an intimate, personal size, and lay flat for ease of reading. So the trim size and perfect binding came first. The images and texts would alternate, paced to build suspense, and giving readers the option to choose a visual or a textual experience, or both.

I found once-classified government materials documenting the bureaucratization of violence, which had been carried out for years in secret. I wanted to find a design element that made the reader aware of choosing whether to look. We settled on the foldover: you see a peek of official writing, and understand more is hidden under the fold. You may well turn past it, but you’re going to be aware of the choice you make. Do I want to take what is given? Or do I want to dig deeper?

The 14 folio inserts, one for each released detainee placed by hand throughout the book, were David’s brilliant idea. My immediate response was “We can’t do that. Unbound pages might get creased, or end up out of order, or get lost.” But I realized in the very next moment that the built-in arbitrariness of this design concept was a perfect metaphor for what has happened to these men.

Some of this work was selected for the LensCulture Visual Storytelling Awards in 2014. See more images here at Gitmo at Work, Gitmo at Play. 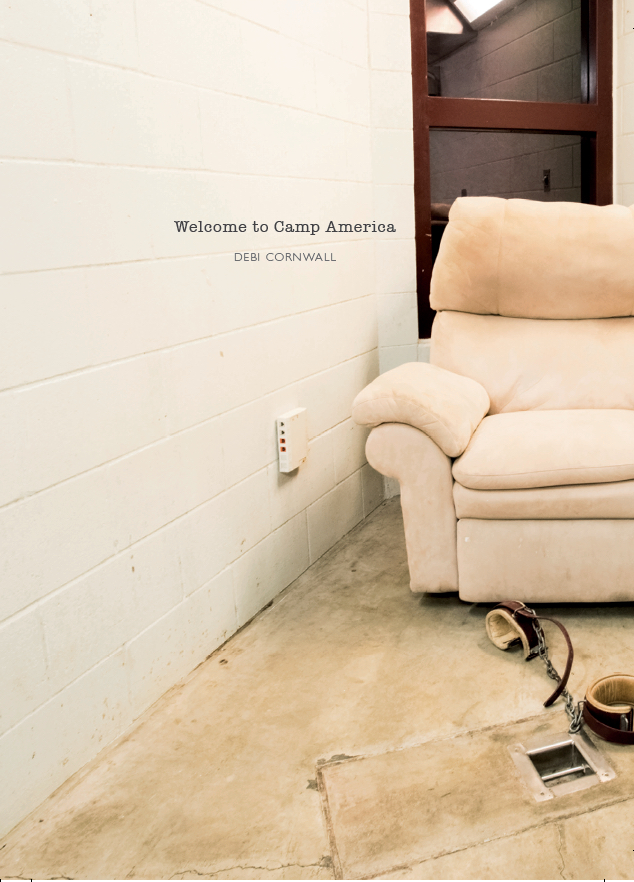