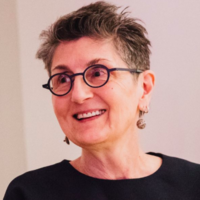 As Executive Director and Chief Curator of the excellent Museum of Photographic Arts in San Diego, Deborah Klochko has developed many ground-breaking new exhibitions of important, relevant, challenging contemporary photography. MOPA’s programs always show the new work in context with different trends of art that came before—connecting this new work to its place in the historical evolution of art and ideas, as well as exploring the roles of materials, technology, daily habits and changing society values.

This important educational approach to exhibition programming is influenced by her previous experience in educational roles at the George Eastman Museum and the International Museum of Photography and Film. Additionally, Klochko has curated dozens of shows and authored a number of publications on photography.

In this expansive interview, among other topics, we speak with Klochko about the pervasive importance of photographic portraits, especially today when portraits have become one of the most popular forms of photography for engaging with a wide range of museum visitors.

LC: As someone who works with such a range of genres, why do you think portraiture stands out as a category of particular strength in photography?

DK: First of all, portraiture engages everyone. People respond to looking at portraits—they feel a connection. There’s really no barrier to looking at a portrait. If you’re looking at a landscape, you might have to think about where it is and why it was photographed. But a portrait is something we’re very comfortable with, and a lot of us grew up with them in our family collections. Also, we’re incredibly curious. That’s why the work of photographers like Annie Leibovitz is so appealing—because we love to learn about other people. We’ve always been interested in portraiture, even before photography was invented.

A portrait doesn’t necessarily have to be the face of a person. It can be whatever tells us about the individual we’re looking at. It’s not about whether it’s in color or black and white, or if it’s large scale or if it’s made using a pinhole camera. Also, a portrait doesn’t necessarily have to be beautiful. It may be harsh, but as long as there’s a reason for this harshness, that can be something that pulls my eye towards it.

LC: What do you think constitutes a strong portrait? Are there things that you find yourself continuously drawn to?

DK: I have the joy and privilege of looking at a lot of work because of what I do, so what really catches my eye is someone who is breaking down the barriers of what we think a portrait is supposed to be—something that is not quite the norm, and that looks at things a bit more passionately or a bit differently.

And I must say, a portrait doesn’t necessarily have to be the face of a person. It can be whatever tells us about the individual we’re looking at. It’s not about whether it’s in color or black and white, or if it’s large scale or if it’s made using a pinhole camera. It’s none of those things. Just break away from the trends and look at things a bit differently. Also, a portrait doesn’t necessarily have to be beautiful. It may be harsh, but as long as there’s a reason for this harshness, that can be something that pulls my eye towards it.

LC: That being said, is there something you often see in portraiture that you don’t particularly like?

DK: For me, it happens a lot with self-portraiture, where the photographer claims that they are revealing a lot about themselves. It often doesn’t resonate as much. Portraiture doesn’t have to be overcomplicated. When we think of the work of Mike Disfarmer, for example, who photographed his community, there’s beauty in the simplicity of his work. It’s rich and opens a window into another world, even with just a plain background.

Portraiture is very exciting—it’s not just one thing. And that’s what I really love about it. This comes from my interest in the early days of photography, when the medium was fast enough to start capturing portraits. I think we aren’t as detail-based these days. Again, we think we’re very visual and astute, but I would say that most people don’t really spend time with details. If you start looking at the past—the clothing, the poses—and understand what’s behind all of it, that contributes to the rich story of the image and makes the work exciting.

LC: You can tell that the stories behind images are important at MOPA; there’s a markedly educational approach to how you present work in exhibitions there. It’s about making the history of photography accessible to those who aren’t necessarily specialized in it, and situating your shows and initiatives within that presented history.

DK: Absolutely. An important thing to remember is that photography is a currency of our time. We are a visual world, and yet most people are not highly literate in visual media. We can take pictures, we can send them and download them, but that doesn’t mean that people understand their full power or how their meaning can change over time or based on shifting contexts. A museum like MOPA becomes, I think, even more necessary and more vital in demonstrating these kinds ideas in this day and age.

History is not linear, and even pre-photographic history plays such an important role in the story of the medium. It’s a fantastic story that we see in so many different areas and disciplines. With an educational approach, we’re able to create a laboratory for new ideas at MOPA, where we look at contexts like technology, as well as all the other ways you can think about images and their impact.

LC: How does that approach inform the kinds of photography you’re interested in presenting?

DK: We don’t have permanent displays, and we also have a film theatre to screen additional work and information. We think about the gallery as an education space, and last year the exhibition Hidden Worlds was on view, which explored things that can only be seen through lenses—of a camera or otherwise. We always look at the pre-history and technology, as well as the scientific and aesthetic aspects of the topic, and we present things in smaller groupings so that people can engage with it.

LC: What’s something you’ve learned from your audience? How have you continued to adapt your approach to make sure the audience gets the most from your exhibitions?

DK: One of the major things we learned is that, whenever possible, our audience likes to hear from the artist themselves. So we started a series called The Artist Speaks, and our first one was a collaboration with photographer Erica Deeman. We showed her series Silhouettes and Brown at the museum, and we created a full body video of her talking about the work with Spanish subtitles. Because we’re so close to the border, we make sure all of our texts are in both Spanish and English. Deeman is of Jamaican heritage, so Silhouettes is a collection of contemporary silhouette portraits of women of color, and Brown consists of portraits of men of color. There are a whole range of issues that this work deals with, and the projects also touch on the history of photography, so it was important for her to speak to our audience about it.

LC: How did you link the images to their historical references?

DK: We included a display case with pre-photographic silhouettes, hand-painted miniatures and early cabinet cards of people of color, so that visitors had a reference for what Deeman explores in her work. People really engage with this kind of approach, and it’s a way that you can look at art while also talking about current issues, like the representation of race. It’s a powerful way of using photography.

LC: In that same vein, why do you think it’s important for audiences to continue engaging with portraiture specifically? Why does it continue to remain so important in the field of photography, and also in our understanding of each other?

DK: I think you’ve hit on it with that last point: it’s important for us to understand each other. For example, think about the work of Fazal Sheikh, who photographs widows and orphan girls in India. That work tells us a powerful story. You can write that story in words, but I do believe—despite the cliché—that a picture is worth a thousand words. And I think that’s why it’s important to be engaged with portraiture, and to engage other people with it as well. It’s important to give viewers the tools to really understand and read an image, because a good portrait has a rich story to tell, and you want to make sure that people really do take the time to understand. There’s a lot to be learned.