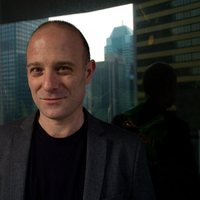 I am conducting a series of interviews titled “You Can Shoot. Can You Talk?” The set is composed of 20 unconventional yet simple questions; some of them apply purely to the art of photography, some strive to get to a deeper emotional level. My interviewees are gifted and accomplished visual artists with a keen interest in the documentary, situational, candid, travel, and street genres.

Arek Rataj: Are you still learning who you are?

Dimitri Mellos: I think I have a pretty good notion as to the basics, the broad contours of who I am. By this I mean my main values and attitudes and general orientation to the world. But, having said that, I don’t think any of us really knows himself or herself completely. In fact, I don’t think that a person is ever totally knowable. Our mental life and inner world are too complicated, and also there are major incentives toward self-deception for all of us.

AR: What got you involved in photography in the first place?

DM: Something about this medium drew me instinctively. Unlike many people who end up becoming photographers, I did not have any encouragement to pursue photography as a child, no dad or grandpa who was an amateur enthusiast and introduced me to it. Yet, I remember how I got hold of a Kodak Instamatic camera that one of my father’s business associates had given him as a gift (and which he did not have much use for), and from then on I started walking around the house and the neighborhood pretending to take pictures.

The interesting part is that most of the time I did not have any film in the camera, but I still went through the motions of taking photos, from looking carefully through the viewfinder to winding the imaginary, non-existent film. So I guess there was something about the process of photographing, rather than the end-product, that was really appealing to me. After many, many years, I rediscovered my passion, and this time I started actually using film. I think photography is so meaningful to me because I am horrified at the passage of time, at the impermanence and transience of things. Photography gives me an illusory way to arrest time and save a few things from oblivion.

AR: Ansel Adams once said: “You bring to the act of photography all the pictures you have seen, the books you have read, the music you have heard, the people you have loved.” Could you tell us about your favorite photographs, books, music and people who are closest to you?

DM: I couldn’t agree more. It is not enough to be knowledgeable about photography in order to be a good photographer. The whole of one’s life experience goes into one’s work. Of course, when it works well, this process is not intentional but rather operates unconsciously, organically. I would be hard-pressed to single out a few of my favorite photographs and other cultural products. I read a lot and I’m sure the person I’ve become is partly the result of the books I’ve read, both literature and non-fiction.

I also love painting and movies, and in fact I think nothing influenced my visual sense more than the films I’ve watched. If I had to choose just one favorite director, I think it would have to be the great Taiwanese auteur Hou Hsiao-hsien: his films are emotionally complicated and visually stunning…

AR: What photographer made the most impact on you and why?

DM: Another unanswerable question! There are so many that have influenced me and really made a difference in my life, not just as a photographer but simply as an art lover. But if I had to pick one, I would say Garry Winogrand, because he was the first street photographer I encountered who really made me see that you can make art out of the most simple, everyday ingredients, out of nothing.

AR: If you could wake up tomorrow in the body of another artist, who would you choose and why?

DM: Perhaps I’d like to be a painter in late 19th or early 20th-century Paris. It was a time of such concentrated artistic achievement and originality; so many great artists we celebrate today were so close to each other on a daily basis, hanging out in each other’s studios and drinking in the cafés at night. It must have been such an incredible artistic community, such a fascinating way of life!

AR: If you took images for a couple of years and weren’t getting a positive audience reaction—would you still take them?

DM: No question about it. I take photos primarily for my own enjoyment. I just love doing it; there is no more exhilarating feeling than creating something. A positive reaction from others is a nice bonus, but it’s not the main reason I take photographs.

AR: If you could witness the perfect street scene at the right, decisive moment, what would you want to see?

DM: Well, part of the perfection of a perfect street scene is its total unpredictability, the fact that it catches you by surprise. So, by definition, I would not be able to envision it in advance, nor would I want to.

AR: What do you want your tombstone to say?

DM: “He left the world a little more beautiful than he found it.” The world is so generous, it gives us so much beauty, and my ambition is to give something of what I saw back to others.

Editors’ note: Dimitri Mellos was a Finalist in the 2016 LensCulture Street Photography Awards.