Feature
Politics in Portraiture: A Conversation With Emily Andersen
While sifting through the archive of her life’s work, this photographer found herself stitching together the commonalities between quiet, personal images and recognizably famous faces.

Politics in Portraiture: A Conversation With Emily Andersen
While sifting through the archive of her life’s work, this photographer found herself stitching together the commonalities between quiet, personal images and recognizably famous faces.

Since graduating from the Royal College of Art in the early 1980s, London-based photographer Emily Andersen has shot the likes of Nan Goldin, Nico, Derek Jarman and Eduardo Paolozzi. Alongside an impressive list of high-profile artists, architects, writers, actors, film directors and poets, her portrait work extends to friends, family, acquaintances, and what she calls “portraits of places.” Now a senior lecturer in theory and practice of photography at Nottingham Trent University, where she has worked for 14 years, Andersen’s career maps a fascination with the people and places that have marked her understanding of the world.

Having recently released Portraits: Black and White, published by Anomie in 2018, Andersen spent a considerable amount of time mining her archive for the project. Presenting portrait work that spans a 31-year period, the book gathers material from the lion’s share of her career, and lays bare the fruits of a hugely diverse and extensive collection of images. Just as archives open up new archives, projects open up new projects, explaining the dynamism of the book, which feels like one configuration of a much wider body of work. Flicking through Portraits: Black and White, it is easy to see why Andersen likens it to a musical composition. Seamlessly bringing together commissioned and personal work, there is something rhythmical about punctuating the quieter and more unexpected images of lesser-known faces with flashes of celebrity.

In this interview for LensCulture, Andersen shares her earliest photographic memories, including how she started out in photography, and how her education shaped her practice. Discussing the politics of portraiture and the process of working through her archive, she reflects on the past and contemplates the future.

CGD: What are your earliest memories of appreciating photography? Is there a specific moment that stands out or makes you remember how it became a special medium for you?

EA: I’ll never forget the Diane Arbus show I saw at the Institute of Contemporary Arts in London when I was about 11 years old. I remember looking at, what I thought at the time, were huge prints—but they were probably just 20x16. I was intrigued by how she photographed people together, and that she understood the relationship and dynamic between them.

Bill Brandt was also an influence on me. He lived close to where I grew up, on Hornton Street just off Kensington Church Street. We had postcards of his work and one of his books at home, and a photo in the bathroom of a maid filling up a big Victorian bath. It was his use of black and white processes that really impressed me. I didn’t know much about photography, but I could see that there was something compelling about his images. With Brandt, it’s usually just a scene, but the way he looked at the scene was graphic, powerful and often political.

CGD: It’s certainly clear in your recent book, Portraits: Black and White, how Arbus and Brandt’s use of black and white, as well their interest in relationship dynamics, inspires your work. How did your appreciation for photography turn into a practice?

EA: I left school at 17, went out to work, and then returned to do A-Levels at Kingsway Princeton College a few years later. There was a darkroom in the bowels of the building, as well as people teaching photography, and I realized how exciting it was. One of my teachers was Janette Beckman, who’s a well-known music photographer now. She was encouraging and showed me that you could be a woman and a photographer. I was living in the same house I live in now, and I made a darkroom under the stairs and started shooting and processing film, and printing it at the college. I then studied for two years at West Sussex College of Art and Design before applying to the Photography MA at the Royal College of Art.

CGD: What kind of work were you making at this time?

EA: Before the RCA, I was dyeing a lot of photos in Dylon, which I then made into prints that I put under a vacuum-forming machine and attached plastic chains to - they were really weird three-dimensional objects. I also made big ply boxes that I stuck photos onto and then hung from the ceiling. Had I been encouraged, I would have been a very different sort of artist, but that’s just not the way it was when I got to the RCA. It was very straight there. I’m a pragmatist, and I realized that it would have been much harder for me to make a living as that kind of artist.

CGD: That’s a significant realization to come to. In what way did this feed into the work you made from that moment on?

EA: Mainly, I was photographing people— people I knew, people I wanted to photograph, places I was interested in and the combination of them together. My new book brings together some of those areas of fascination—who people are, why they are and how they exist in the world. Looking at the world and seeing what that reflects back and resonates to us was what Arbus and Brandt had. At the RCA John Hedgecoe, who established the department in 1965, could be frightening. It made me produce work that I thought would be acceptable, but I don’t think I was necessarily taught very well. I was also uninterested in being taught in a funny kind of way. I learned more from my peers and from osmosis.

CGD: While your practice might not seem explicitly preoccupied with politics, the tenderness of your images seems like an important way of making space for your subjects. In what way does politics come into your work?

EA: The day that we graduated from the RCA, Thatcher came into power. It was a terrible thing to happen to this country. It was terrible politically, it was terrible because of AIDS, and it was terrible for the gay community, of which I am a part. There was a real dichotomy going on, where there was this awful stuff happening politically, but there were jobs. It was a very strange time. I don’t think you realize, when you’re living through times like those, how it’s affecting everything you’re doing. I’m interested in where we’re living and how we’re living and what it means, as well as how the people I choose to photograph are engaged with the world. So inevitably, the photographs that I take are political.

CGD: The photos in Portraits: Black and White span a 31-year period, from your 1985 photo of Nico to the portrait of your mother taken outside of her home in 2016. It seems pertinent for these two significant women to bookend the project, and I was wondering if you could say something about your interest in bringing together personal and celebrity portraits.

EA: What was interesting about this book was that I worked with a young woman called Sara Cuono, who contacted me about assisting. Coming from Italy, she didn’t recognize a lot of the people in the book. This anonymity was really helpful, because she had a different view on the photographs, which helped me sequence them and edit them. Sometimes I’d say, “I have to have this one in,” because it was someone amazing, but it was really important for me to have the extremes of unknown and super famous, and to also have a seamlessness between my personal and commercial work.

For years I’d been photographing fathers and daughters, and I was interested in that dynamic, for all sorts of reasons. Two women I know, Anna Paolozzi and Louisa Lasdun, had famous fathers, and I was interested in what it meant to them in relation to growing up, and their own ability to transcend or move on from it. My portrait work is about gender, sexuality and relationships between people: fathers and daughters, mothers and sons, and then the odd people who are on their own. The book is a tiny portion of my archive—it’s just a slice of what I’ve done.

CGD: I wanted to ask you about the process of trawling your archive to gather material for this book, ultimately creating a micro-archive in its own right. It doesn’t just present an overview of your career—it also explores a broader cultural history. Reflecting on the project and your career up to this point, can you tell me more about the world contained in this book?

EA: So much of looking through the archive and selecting images is an unconscious process. One has to spend a lot of time digging stuff out and then deciding what the story is. This book is full of the creative people of my lifetime who I think are important in terms of how we view and think about the world. The process of going through my archive and selecting the images has shown me that the book is a cultural history. We had the backdrop of AIDS and Thatcherism, but I’d be going out every week to buy a record because the bands were incredible. It’s a time that will never be there again, so I’m pleased to have produced these photos and this book, which is my insight into that era. I want to go back and do more portraits—there are so many people I still want to photograph. I don’t feel it’s finished—I feel it’s just starting, in a funny way.

CGD: In your first book, Paradise Lost and Found, you photographed abandoned railroads and rundown factories that once had a great life, but are now found in disrepair. In your pictures, you give them back the majesty they once had by breathing new life into them. This seems linked to what we’re talking about, so I’m wondering if there’s a sense of nostalgia to your work.

EA: No, I don’t hark back for the good old days. I acknowledge that there have been some amazing times, but also how ghastly things have been. I call the photographs in Paradise Lost and Found “portraits of places.” What I was trying to do was find something special in the ruins. I was intrigued to make these factories look monumental, like coliseums. This is what I attempt to do with people—take the ordinary and make it extraordinary.

CGD: Can you tell me how you feel your practice today compares to when you started?

EA: I wasn’t able to articulate this earlier on in my career, but the reason I’ve been successful or employed to do what I do is because I have an ability to relax the person I’m photographing, which is something I honed over time. I’m interested in the subject and getting them to do what I feel might work. I think that my eye has become a lot more refined over the years, partly because I have more knowledge and partly because I’ve just seen so much more. I’m able to block out a lot of noise—visual and audible. That’s a real advantage when you’re doing something like I’m doing. I’m very driven to produce things to a high standard, which of course I can’t do every time, but it’s a challenge that requires an enormous amount of focus. But also, I’m literally fascinated by people, so that keeps me engaged with the world. I won’t be distracted from that. 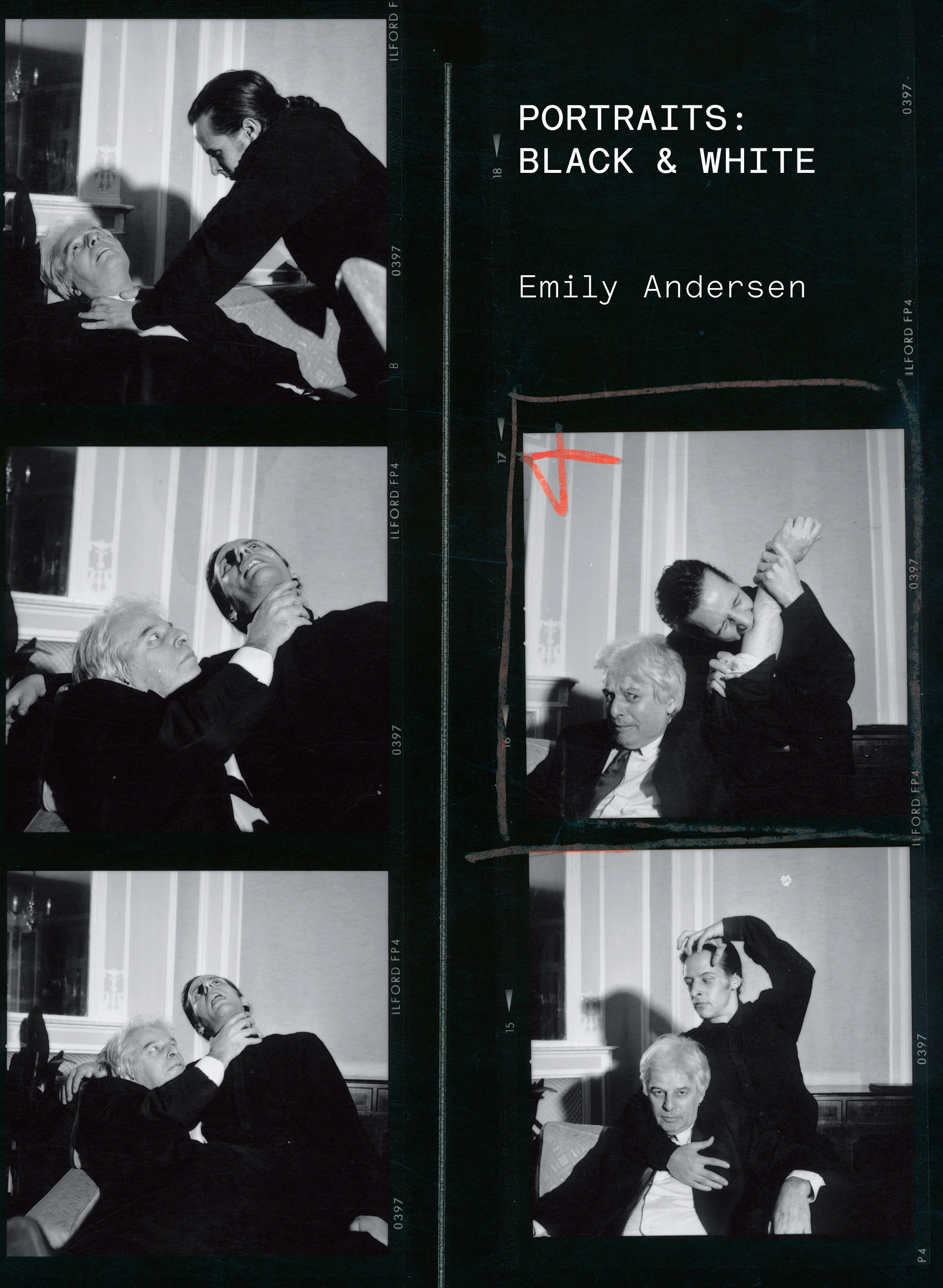