Interview
Gletscherfahrt: Beyond the Visual
Partially covered glaciers in Switzerland provide the starting point for this conceptually rich landscape series—as well as a fascinating interview on creativity and accidents.

Gletscherfahrt: Beyond the Visual
Partially covered glaciers in Switzerland provide the starting point for this conceptually rich landscape series—as well as a fascinating interview on creativity and accidents. 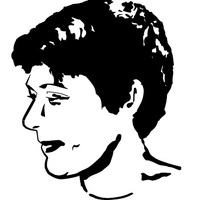 Jack French met Ester Vonplon on the day of “Sound, Word and Landscape: Beyond the Visual,” an event organized by Photobook Bristol in November. There she presented work from her Gletscherfahrt project and discussed her abstract, unsentimental approach to landscape photography.

JF: You photograph while wandering out in the countryside. How did you find the subject matter for Gletscherfahrt?

EV: I first heard that people were covering parts of some glaciers in Switzerland to keep them from melting—but I was not traveling to see this specifically. Instead, I went up to the mountains in the summer, in order to photograph snow at an unusual time. And then I just happened upon these covered glaciers. From the moment I saw them, I thought, “What a very stupid idea! Glaciers are huge and you can only cover a small part.”

This got me thinking about the process of dying, and the way we cover dead bodies with a white sheet. This was consistent with a recurring theme in my work about disappearing things. The glaciers are part of a world which is quickly going away.

Besides the photographs, I also made audio recordings—the sound is quite impressive when you’re up there in the mountains. You can hear the melting, it’s that loud, as well as the ice breaking. I also recorded under the glacier covers, where you hear melting drops falling all the time. But just on the other side of the cover, you can also hear airplanes flying over. That’s all part of the work too.

Then I gave the recordings to Stephan Eicher, a musician who worked with an orchestra to make a requiem for the glacier. You hear the melting and then the orchestra playing over that sound. It’s 22 minutes long, recorded on a 10” white vinyl record included with the book.

JF: How important is the book as an object, its material and tactile nature?

EV: Seeing the book in print is really important, as well as holding and feeling it. I have done a lot of artist’s books as well so this is a really big part of my work.

But that doesn’t mean everyone should make a photobook. For everything you do, there has to be a meaning and reason why you’re doing it. An exhibition, a work on your website, a book, these are all different pieces and different mediums. But in the end, they all have to work together.

For example, for an exhibition, I did charcoal pigment prints which meant I could only print in black. Those turned out very differently from the prints in the book (even though they are strictly the same image). I really love to figure out what fits best to each object that you decide to work with.

JF: In what ways does this project feel different than what you’ve done before?

EV: In my earlier work, you could see what it was all about and it was very much about photography, I think. Now it has gone…not beyond photography—but more about the picture itself, more abstract. For example, I recently made a project about the concept of white. In it, I was photographing only snow and salt, and how salt is affecting snow. When you look at them under a microscope, their shapes are like opposites…maybe that gives you an idea of what I mean?


JF: And how is this photobook different from the books you’ve done before?

EV: For my previous book, Cudesch da Visitas, I was walking around using all kinds of cameras. Every possible format made it in there—35mm, 4x5, polaroid. But what they had in common was that they were all grainy and not sharp. Finally, people asked me what would happen if I could shoot in a focused way. Gletscherfahrt was my answer. The glaciers are in focus and there are not even so many mistakes!

JF: But as soon as you publish it, it stops being a mistake. If something has intention behind it, then it’s deliberate…

EV: Sometimes you don’t really see something in the moment when you photograph the scene—but later, when you’re at home, you discover that a mistake has happened and that it makes the image even better.

For example, while making the photographs in Cudesch da Visitas, it was very cold. Every morning, I was getting up with the sun and walking down to a valley that was super cold. Because of the low temperature, something happened with my polaroid and it became too cold to operate properly. Of course, I could have used a better camera, but this was a choice I made, so I accepted the results.

JF: It can be so disappointing when you fail to capture what you saw, but when you look back later (after you’ve forgotten what you were trying to achieve), you’re able to just see the image for what it is. Somehow that’s more exciting—it’s out of your control, wild somehow. Meanwhile, it’s difficult to get that effect with a digital camera because if it’s not perfect, you just take another shot.

EV: Yes, it’s interesting how one reads a picture differently over time. Sometimes when I look at a finished picture, I feel like I missed the point entirely…but after I’ve put it away for a while, and then have the chance to take it out again, I start to see something unexpected…!