Postcards from Europe
This seemingly quiet photoessay — supported by disquieting statistics — examines illegal migration throughout Europe from an unusual point of view.

In Postcards from Europe, Eva Leitolf examines how European societies relate to the European Union’s external borders and the associated internal conflicts.

Designed as a long-term, open-ended search for photographic evidence, the archive focuses not on the suffering of undocumented migrants, which has already been widely documented, but on the structures and procedures with which European states respond to, process and administer migration, and on the measures instituted to control the Union’s external borders.

Combining documentary and conceptual strategies, the artist explores the tension between what can be seen and what is left to the imagination, testing the possibilities and limits of visual representation.

Since 2006, the project has taken Eva Leitolf to Spain and the Spanish exclaves of Melilla and Ceuta in Morocco, to the Hungarian border with Ukraine, to the Channel ports of Calais and Dover, to Italy and to Greece. The project is ongoing. 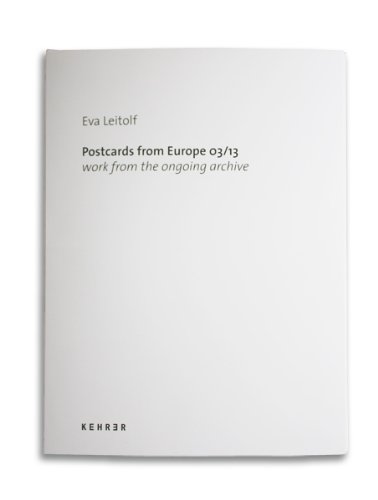 
Playa des los Lances, Spain, 2009. A boat carrying 23 immigrants went down off Tarifa during a severe storm in November 1988. Four survived, ten bodies washed up on the beach at Los Lances. On September 15, 1997, another boat sank. From over 30 passengers, only six survived. 14 corpses washed up on the same beach. © Eva Leitolf
Ferry Crossing, Mellilla-Almeria, 2009. On January 10, 2009, I crossed from Spain to Morocco. The seven-hour crossing cost €19.20. At least 14,714 migrants died attempting to enter Europe between 1988 and 2007. Some 10,740 are reported to have drowned on their way to Spain. © Eva Leitolf
Ladders, Melilla, 2006. In 2005, the Spanish government announced plans to strengthen its border. A fence was built. Hundreds of immigrants tried to scale the fence with ladders. The border guard responded with tear gas and rubber bullets. At least 14 migrants were killed. The EU gave Morocco 40 million euros for border control. © Eva Leitolf
Rostrogordo Picnic Park, Spanish-Moroccan Border, 2009. Melilla has been in Spanish control since 1497. Morocco has laid a claim too since independence in 1956. With help from the EU, Spain has only increased its defenses of the city: six meter walls, topped with razor wire, monitored by sensors, cameras and watchtowers. © Eva Leitolf
Petrol Station, near Szeged, Hungary 2009. Four Afghans were detained here on September 24, 2009. They asked for asylum, saying they had each paid €7,800 to a trafficker to get to Europe. The traffickers knew it was a spot frequented by police, but once they receive their payment, they do not care. © Eva Leitolf
Vendicari Nature Reserve, Italy, 2010. In 2007, 17 corpses were found on this beach. A local couple, on their own initiative, obtained a list of the names of the dead. They contacted the relatives in Egypt and Palestine and arranged for a Muslim funeral to be held. About 100 people attended the funeral, officiated by an imam. © Eva Leitolf
Orange Grove, Rosarno, Italy, 2010. Mostly illegal workers from Africa and Eastern Europe were paid €20 euros a day to pick oranges. A worker can pick, on average, 400-700 kilos a day. The business became unprofitable. 4,000-5,000 immigrants were left living in plastic shelters or abandoned buildings, with nothing to do. © Eva Leitolf
Bari Palese, Italy, 2012. In August 2011, protests broke out in the immigrant facilities nearby after a new law said they could be held in detention for 6-18 months while being 'identified'. After the protestors stopped traffic, the police fired tear gas at them. Fighting broke out, 80 were injured. A local prefect has promised change. © Eva Leitolf
Palazzo Selam, Rome, 2012. In November 2012, there were 835 asylum-seekers living in this former university building. The occupation was tolerated. Meanwhile, some 6,000 other refugees in the city needed shelter, with only 2,200 spots available. Some migrants took the Italian asylum system to court. They were rebuffed. © Eva Leitolf
Border Exclusion Zone, Nea Vyssa, Greece, 2011. The local press officer for border control suggested two possible photographs to represent his organization: a panorama of the exclusion zone or a staged photograph showing officers on patrol. Photographs of the area are always staged outside of the actual border zone. © Eva Leitolf
Attiki Square, Athens, 2011. Thousands of migrants are homeless in Athens, including many women and children. In 2010, some locals formed vigilante groups to 'take back' their neighborhoods. Severe attacks ensued. On Oct. 8, a peaceful rally showing solidarity with the immigrants was dispersed by the police using teargas. © Eva Leitolf
Igoumenitsa Ferry Port, Greece, 2011. In 2011, hundreds of locals demonstrated, calling for an end to the 'siege of illegals' living next to the port. While this took place, the police fired tear gas into the makeshift migrant shelters nearby. The air was so thick that travelers queuing for the ferry could not leave their vehicles. © Eva Leitolf
Campsite, Lesbos, Greece, 2011. In 2009, 500 activists traveled to Lesbos to discuss European border policy. Nearby, the Pagani detention center was holding ~1,000 immigrants, including many children. A Greek Minister described the conditions as "worse than Dante's Inferno". The detention center was closed that November. © Eva Leitolf