Book review
The Dream: Finding New Ways of Conveying The Refugee Crisis
Mixing pinhole photography with award-winning photojournalistic frames, this photobook masterpiece succeeds in breaking through our repetitive representation of the refugee crisis to tell the story in a fresh, powerful, poetic manner.
Photographs by Fabio Bucciarelli
View Images

The Dream: Finding New Ways of Conveying The Refugee Crisis
Mixing pinhole photography with award-winning photojournalistic frames, this photobook masterpiece succeeds in breaking through our repetitive representation of the refugee crisis to tell the story in a fresh, powerful, poetic manner.

When we sleep, our differences fall away. In the inky darkness, in the sweet silence of slumber, the rich and the poor, the powerful and the weak all look largely the same.

And while dozing, of what does each of us dream? It’s impossible to know from the outside. A photograph, no matter how piercing, cannot reveal what happens in the other-world of dreams. But surely, from the most outwardly successful to the most destitute, we all hold out for the same hopes of happiness, security and love.

It is fitting, then, that photographer Fabio Bucciarelli’s new book opens with a full-page image of a woman at rest. Soon, we will be able infer she is a refugee. But at first, when confronted simply by silence, we can only think of her as a fellow human being. What world fills her dreams? The picture cannot say, but in the emptiness created, we are allowed to wander.

Contrast this picture, then, to the images that flood our mind when we hear the word “refugee”: desperate faces with outstretched hands; crowded beaches, boats and trains; mountains of life jackets and endless queues at reception centers; a lifeless child in the surf. Such pictures seem to tell the whole story in an instant: this is what a refugee looks like; this is their reality. Faced with such stark “truth,” we are left with just two choices: if empathetic, our heart breaks (the same way, over and over); if close-minded, our heart hardens (“This is not my problem, go elsewhere”). But what new understanding do these ceaseless repetitions offer us?

As an experienced (and decorated) photojournalist, Bucciarelli recognized that the much-discussed refugee crisis needed a new perspective, a fresh visual approach. He saw how one of the most significant issues of our day was beginning to numb the world. He searched for a new language with which to tell the story he was witnessing—the story of how millions of people around the world are desperately searching only to fulfill their most basic needs.

His book, titled The Dream, is organized (metaphorically, novelistically) like a single day. In the beginning—darkness and repose. Sleep. A simple introduction: “The World’s Refugee Crisis” (for this is a global problem, not just Europe’s). Deep, pitch-black pages of mystery and longing. Then, as if awakening with the first light, a slow return to the world, conveyed perfectly through pinhole imagery. After, quite suddenly, the raw frame of reality—walking and trudging and queuing and crying and waiting. Tents and boats and blankets and overcrowded cellphone charging stations.

In the harsh, revealing sunlight, we see again these familiar photojournalistic images, but now with a poetic touch. In the context of a day’s journey, they appear like moments of lucid dreaming—are we awake? Is this horrible nightmare truly a reality? Occasional pinhole photographs mark moments of doubt and disorientation. Crowded pages (full-bleed, on both sides) reveal both chaotic madness and unending drudgery.

Finally, night begins to fall again. Blurry, overnight train cabins, much-needed cigarettes, the shining relief (and shocking fear) of a coast guard’s spotlight. Midnight medical inspections, desperate, pleading phone calls. Interspersed blank pages, much-needed, of pure black. And at the end, another respite: sleeping figures once more. A return to the universal dreams that sustain each and every individual who has been pictured through the nightmarish day we collectively experienced. What lies ahead is impossible to say—more travails and hardships, to be sure. But as Shakespeare wrote in The Tempest, “When I waked, I cried to dream again.”—if nothing else, we are able to carry on thanks to our dreams.

The book itself, as an object, is a masterpiece. Each and every step of the way, we find evidence of abundant thought and care. For example, to produce the pinhole images, Bucciarelli worked with a team to create a unique pinhole camera, built to specification for the project’s particular needs. The cover is inspired by the mottled, mixed-up colors of soaking wet photographs found in the pockets of dead refugees who had washed up on the shores of Italy. In the special edition, the book comes in a life jacket sleeve, hand-sewn by refugees using actual materials from the beaches of Lesvos.

Within, the individual photographs are laid out with brilliant (and dedicated) vision, ranging from thoughtful single pages, to dramatic double page-spreads and gate-folds. Even the use of blank pages (both black and white) speak to Bucciarelli’s commitment to the specificities of the book as a storytelling medium and to his desire to convey his narrative in an original and striking manner.

With the popularity of photobooks these days, photographers reflexively want to produce their own without necessarily taking the time to grasp the power (and limitations) of the medium. But since books like The Dream exist and show us what is possible to communicate between the covers of a photobook—it is a shame to produce anything less. Please, find a copy of this book and spend some time appreciating the immense degree of dedication behind its production. Highly, highly recommended. 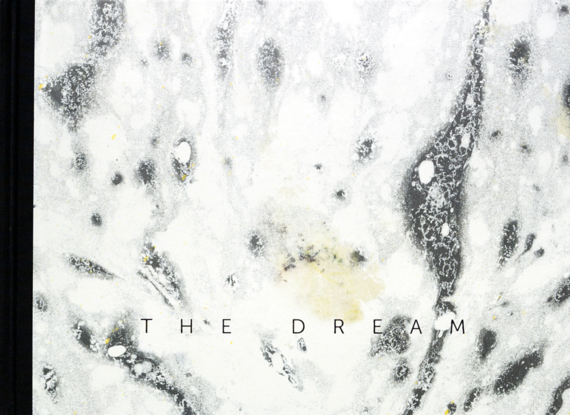 A woman from Syria rests on a bus crossing Serbia, bringing her from the Macedonian north border to Belgrade, Serbia's capital city, on August 29, 2015. © Fabio Bucciarelli/MeMo
Just landed refugees walk from the port's dock to the first reception center in Augusta, Italy on June 20, 2015. The number of refugees and migrants taking the dangerous journey across the Mediterranean to Europe, fleeing war, hunger and persecution, is increasing more and more. According to UNHCR's data, more than 1,000,000 arrivals by sea were registered in 2015 in Europe. © Fabio Bucciarelli/MeMo
Refugees' personal belongings left on a camp near the port of Benghazi on February 2011. People coming from African countries and Bangladesh fled from the battle between rebels and Gaddafi's forces. © Fabio Bucciarelli/MeMo
A Syrian woman looks at the sea in Kizkalesi, around 60 km west of Mersin, Turkey, while hoping to be embarked soon on a ship headed to Europe. As the Syrian civil war continues, with no end in sight, thousands of Syrian refugees arrive each year to the Turkish coast, turning to human smuggling operations as a way to reach Europe. One of the smugglers operating out of the port of Mersin, when interviewed, reported that $6,000 are required, per person, to get an illegal passage to Europe on board an old freighters. According to UNHCR, more than 3,000 refugees and migrants drowned in the Mediterranean in 2014 fleeing conflict-torn regions, and more than 3,700 died in the same way in 2015. © Fabio Bucciarelli/MeMo
Migrants and refugees coming from Sub-Saharan African countries are seen waiting in line for the identification process at the dock of the port of Messina, Italy. On July 4, 2015, 306 people were disembarked from the Italian Coast Guard ship at this Sicilian port. They were rescued from three different boats departed from Libya. Most of the people came from Sub-Saharan countries like Gambia, Senegal, Mali, Ivory Coast, Ghana, Nigeria, Mauritania, Guinea Conakry and Guinea Bissau © Fabio Bucciarelli/MeMo
A Sudanese refugee sits on the dock of the Sicilian port of Augusta, Italy waiting to be transferred to the first reception area, June 23, 2015. He fled from Darfur, Sudan, passing through the Sahara desert to reach Libya and take a boat towards Europe. He is part of a group of 458 people who departed from Libya and were saved and disembarked from the Spanish Coast Guard vessel in this Sicilian port. © Fabio Bucciarelli/MeMo
African and Syrian people recharging their phones after the long sea journey crossing the Mediterranean. Taken at the reception center at the Sicilian port of Augusta on June 20, 2015. © Fabio Bucciarelli/MeMo
Two young Syrian refugees on the terrace of a hotel in Mersin, Turkey which hosts refugees while they wait to embark on boats headed to Europe. January 29, 2015. © Fabio Bucciarelli/MeMo
A Syrian refugee family just landed after reaching the island of Lesbos. They arrived by rubber boat from Turkey, landing at the village of Skala Sykaminias in the northeastern part of the island on October 9, 2015. For many thousands of refugees and migrants heading to Europe from the Middle East, the long route to a new life lies through Greece and the Western Balkans with the ultimate destination in Germany and other northern EU countries. © Fabio Bucciarelli/MeMo
Refugees, mostly coming from Syria and Afghanistan, rest on the train while travelling through Macedonia on August 27, 2015. According to the UN Refugee Agency, more than 850,000 arrivals by sea were registered in Greece in 2015. © Fabio Bucciarelli/MeMo
A boat with about thirty people on board—mostly from Tunisia—is intercepted by the Italian Coast Guard and accompanied to the port of the Italian island of Lampedusa, on February 20, 2011. Lampedusa served as the "gateway to Europe": the island, closer to Africa than to Italy, served as the landing point of many boats carrying migrants from Tunisia and Libya, especially in the aftermath of Gaddafi's overthrow. © Fabio Bucciarelli/MeMo
An Italian Red Cross doctor measures—with an electronic thermometer—the temperature of a boy from Sub-Saharan Africa during the medical checkup carried out at a tent set up at the dock in the port of Messina, Italy. On July 31st, 2015, 392 people disembarked from the Italian Coast Guard ship Diciotti at the Sicilian port. Most of the people came from Sub-Saharan countries but there were also refugees coming from Sudan, Somalia and Libya. © Fabio Bucciarelli/MeMo
A man from Syria sleeps on a local train crossing Macedonia. As he rests, he is carried from Gevdelija, on the Macedonian-Greek border, to Tabanovce on the Serbian border. August 27, 2015. © Fabio Bucciarelli/MeMo
The Dream was published by FotoEvidence. The book runs in a limited edition of 1000 copies, with 100 special editions that include a signed 20 x 30 cm fine-art print and a "cover vest" made out of the life jackets used by refugees to arrive in Europe. More information available in the links below. Book photo © Elisa Giuliano