Book review
Maine
In his latest photobook, Gary Briechle compiles intimate snapshots of the peculiar characters who entered his life since he moved to Maine some 20 years ago.

Maine
In his latest photobook, Gary Briechle compiles intimate snapshots of the peculiar characters who entered his life since he moved to Maine some 20 years ago.

Maine is Gary Briechle’s second book with Twin Palms Publishers. His first, Gary Briechle: Photographs (2012), consists of luminous black and white photographs on black paper, each picture made from a collodion-coated wet plate and shot on a rag-tag batterie of old, new, hot-rodded and homemade view cameras. When this first monograph was published, the pictures were unlike anything being shown at the time, existing somewhere between a documentary take on Joel-Peter Witkin’s work and a New England, large format analog version of an Antoine d’Agata project.

But Maine is all in color—scuzzy snapshots Briechle took on 35mm film cameras and cheap digital point and shoots, often captured while simultaneously making the slower exposures. He shot color transparency (Astia) with a Leica, and also used whatever digital camera he had nearby. “These color pictures have no quality other than the image. They are not objects like the plates are,” Briechle explains. Instead, the pictures in Maine feel spontaneous and casual rather than formal and slow, but Briechle says that he sees both types of pictures as documentation of a moment. He reflects, “Plates are moments, too, even if the exposure is a few minutes long.”

Both books consist of the same subject matter: documentary-style portraits of ordinary people and domestic animals, with the occasional landscape or exterior. But Maine feels very different—dirty and broken rather than fancy and romantic. Much of Maine was shot at night, but the pictures seem forensic and diurnal compared to the more mysterious and occluded collodion work. “This is such a sad, bleak book—I super like it,” he says.

Briechle, who was born in New Jersey, started photographing in 1996 with a Pentax 6x9 and Contax 645. He moved to Maine in 2000. He was awarded a Guggenheim fellowship in 2015, and from 2008 until the summer of 2018, Briechle sent 4x6 prints of his color work to Jack Woody, publisher at Twin Palms in Santa Fe. Upon receiving the first set of work, Woody asked Briechle to show him everything, and he began selecting and sequencing the images for the book.

I sat down with Gary Briechle, and we flipped through his new book together. There are no captions, no essay—no words at all. He explains, “I love the wordlessness of it. It’s visual language. Words can come in and take over, especially in fucking photography.” I agree, but it’s interesting to hear the stories behind the pictures.

That’s his son Tommy on the cover. Then, snow and trash at Salvation Army on a Sunday; cigarettes on a sidewalk in Portland; a single foot in bed (white and cadaverous); and a trash can and a chair. “Two things that are the same size,” he says. “One says sit, one says throw yourself away.”

Then there’s a woman breast-feeding, Briechle’s initials on her chest, accompanied by a tattoo of a skull and guns and a spider. “It’s life and death,” he says. “He’s a newborn there. I helped her give birth to her child, and she wound up getting that spider tattoo on her neck.”

Briechle says he’s annoyed that collodion is having a moment of trendiness. “When I started, nobody was doing collodion—now it’s everywhere. But I like the gritty stuff; I don’t like the stupid-looking collodion stuff. Really, I hardly like any photography. I see it churning in on itself over and over.”

Then there’s a broken flag; and a girl with a ponytail, head in her lap. “Driving around, all these crappy flags, and then that ponytail…” he says. There’s a girl smoking next to a house, and a spider web in the corner on white vinyl siding. Later, a moth is caught in a web, as if crucified. “That moth is in the same corner as the spider, caught in the web now,” he says. “I’m a part of the pictures—I’m a witness to this thing. It’s what I like about photography: that the photographer is just a piece, not in charge. Most of the time, photography doesn’t tell the truth—everybody is making stuff up. When there’s too much control, it doesn’t impress me.”

Then we see his son, sunburned. “I saw it and I said, ‘Tommy, oh my God, look at your sunburn.’ And then I took a picture.” There’s also a picture of a dragonfly resting on the side of a house trailer, where the windows and door look like two eyes and a mouth, followed by an image of his mother’s wig. “She had breast cancer, and her hair came and went,” he reflects.

There’s a photo of a nasty old couch and a kid squirming around it in his pajamas. “Andrea Modica said that the indentation on the couch looks like a vagina giving birth to the kid,” Briechle says. “There are always pictures within pictures, you just have to choose where to be.”

We flip to an image of a girl in lacy underwear on a bed, guns everywhere. “Her boyfriend was a weapons guy,” Briechle says. “He had a trunk full of stuff, and they ended up on the bed and I took plates of that. Why in underpants? It was summer, man.”

Briechle’s relationship to his subjects varies. When we come across an image of a red-headed woman, he says he often receives calls from her late at night. “Come on, let’s do something,” she’ll say. “Oh man, we’re having this frickin great party. You’ve gotta come!” Briechle concludes, “I always do.” Soon after, a photograph of a woman sitting in a car follows. “That’s a Wal-Mart parking lot in Augusta,” he says. “Same neck, but no tattoo yet. There was a guy in the next car getting a blow job in the driver’s seat.”

Then we see a syringe in a hand, with a Christmas tree in the background. “That’s at Christmas time, and that’s heroin in the syringe,” Briechle says. “The image alludes to how he’s just a child who got big, which is really what we all are.” This image falls in stark contrast to another image of Briechle’s mother. “That’s my Mom in bed,” he says. “She’s in a nursing home now—can’t get up, lays down all day. She’s in a wheelchair, then bed—it’s a contraction.”

As we come to the end of our meeting, Briechle is restless. It’s clear that this project feels complete, but what’s next? “I will always do plates,” he says. “I like the drawing quality. But I want to figure out something new. I’m working on color collodion now. It’s not enough to just shoot big plates. It’s like I got an old Stratocaster guitar—it’s beautiful, it’s cool, but it only gets you so far.”

Editor’s Note: Maine was recently selected as the photobook of the month by Charcoal Book Club, a wonderful platform and resource for photobook lovers around the world. Check out our interview with founder Jesse Lenz here, and be sure to check out the Charcoal Book Club web shop and monthly subscriptions for good deals on beautiful books. 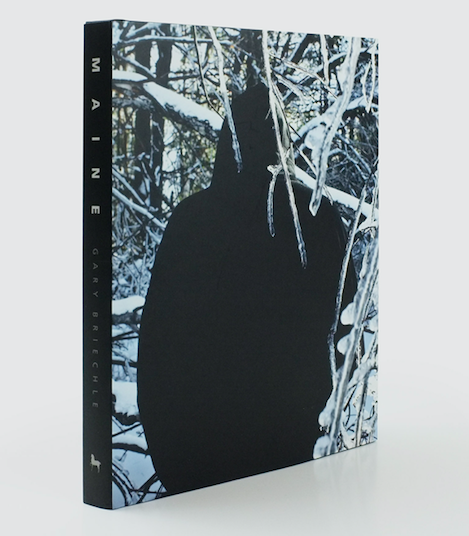