The Long Shadow of Chernobyl
A monumental work, spanning two decades, that conveys both the individual tragedies and historical consequences of humanity&#8217;s greatest nuclear disaster.

The Chernobyl disaster, more than anything else, opened the possibility of much greater freedom of expression, to the point that the system as we knew it could no longer continue…I must say that I started to think about time in terms of pre-Chernobyl and post-Chernobyl.

—Mikhail Gorbachev, from the introduction to The Long Shadow of Chernobyl


On April 26, 1986, the Chernobyl Nuclear Power Plant’s reactor #4 blew up after its operators botched a safety test. Almost immediately, a plume of highly radioactive material was sent shooting up into the atmosphere. The longer-term consequences were not as readily apparent.

Today, we know that the radioactive fallout scattered some tens of thousands of square kilometers across three countries (Ukraine, Belarus and Russia), with some fallout even reaching out into the rest of Europe. We know that the accident forced some quarter million people to move permanently from their homes. But perhaps what we don’t know—and what these photographs urgently try to show us—is that the long shadow of Chernobyl continues to darken countless lives to this day.

The book, like the disaster itself, is a serious matter. Translated into three different languages (English, French, German), the book is introduced, soberly, by the last leader of the USSR, Mikhail Gorbachev and filled with powerful photograph after powerful photograph.

These images did not come about overnight—long-time National Geographic contributor Gerd Ludwig spent some two decades producing the pictures that comprise this affecting book. On almost every page, the fruits of Ludwig’s steady and sustained labors are evident. While we may feel numbed to the ever-changing images of disaster on the newspapers’ front pages, what Ludwig’s photos make us feel so urgently is that Chernobyl is not just another incident and not just another headline. The longevity of Ludwig’s project makes us feel the historical significance of this event. It is an event with decades—probably centuries-long—repercussions that we should be taking very, very seriously.

Ludwig approaches his topic from several different perspectives, as reflected in the book’s thematic sections. In the beginning, we are offered a variety of views—historical, political, personal. This overture is followed by the project’s most difficult section, “Victims.” Again, in contrast to daily photojournalism, these are not snaps, Ludwig is not a tragedy-grabbing opportunist. Ludwig came back to this area year after year, decade after decade and his connection to the subjects makes us feel similarly involved with the stories at hand.

Next, we explore the (semi-)abandoned city of Pripyat. Before the accident, the area had some 50,000 residents. Today, the former city has been transformed into a chilling tourist destination. Since the Ukrainian government began to permit “Chernoybl tour groups,” the ghost-town has endured a proliferation of large-scale disaster tourists. Although one might hope that these destruction-tours could offer similar lessons as Ludwig’s project, the pictures in the book indicate a glibness to their experiences. As Ludwig writes, “the solitary doll, artfully [artificially] arranged, has become a common sight.” In other words, the tragedy has been subtly transformed into spectacle.

At the heart of the book, we find pictures from the blown reactor itself. To reach the reactor, Ludwig had to seek access to a place where few other photographers have ever set foot. In his own words, “It was the most challenging photographic situation I have ever encountered. The space was dark, loud, and claustrophobic; and I knew that I had less than 15 minutes to capture arresting images of an environment that few have ever seen.”

The book closes with some amazing and unexpected pictures from the 30-km exclusion zone surrounding Chernobyl. Amidst the ruins and growing wilderness, Ludwig discovered elderly locals who ignored the government’s repeated calls to evacuate and made their way back to their homes in order to live (and die) in their familiar environs. These are some of the most touching images in the whole volume, a testament to Ludwig’s desire, “to act in the name of silent victims, to give them a voice in my pictures.”

By the time we have reached the end of the book, Ludwig has powerfully communicated the gravity of the ongoing situation in Chernobyl. Although Gorbachev’s plea at the beginning of the book might feel anachronistic, out of date (a bit like Gorbachev himself), we overlook the urgency of his words (and Ludwig’s photos) at our own peril. After all, the events at Fukushima happened just a few years ago, Iran’s nuclear capabilities are in the news every single day and the international community took almost 30 years to fully determine how they would contain the nuclear fuel roads lying at the center of Chernobyl.

As we close the book, another thing is very clear: while the ravages of war, of disease, of natural disaster are terrible, the effects of nuclear catastrophe simply cannot be understood on a human scale. In the words of noted scientist Alexei Okeanov, the ramifications of Chernobyl are like “a fire that can’t be put out in our lifetimes.” 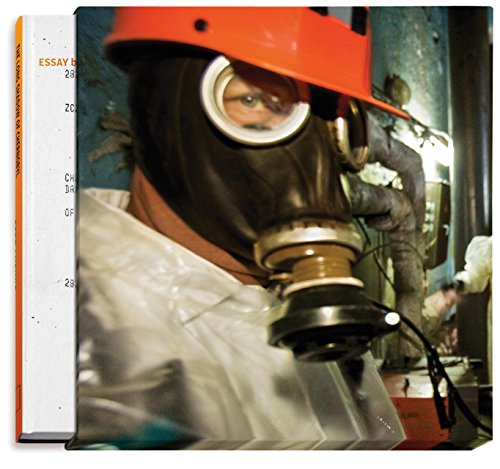 “It was the most challenging photographic situation I have ever encountered. The space was dark, loud, and claustrophobic; and I knew that I had less than 15 minutes to capture arresting images of an environment that few have ever seen.” —Gerd Ludwig, going into the faulty reactor #4 at the Chernobyl Nuclear Power Plant. © Gerd Ludwig
On 26 April 1986, at 1:23 am, the Chernobyl Nuclear Power Plant’s reactor # 4 blew up after operators botched a safety test, triggering an explosion and a fire that burned for 10 days. The radioactive fallout spread over tens of thousands of square kilometers, driving more than a quarter of a million people permanently from their homes. To this very day, the long shadow of Chernobyl continues to darken lives—socially, environmentally, and physically. From the first day, officials downplayed the damages of the Chernobyl disaster, and the misinformation continues: a 2006 United Nations report claims that as a result of the disaster an estimated 9,000 people will eventually succumb to cancer-related illnesses. However, reputable environmental organizations state that more than 100,000 people have already died as a result of the accident. As the world remembers the Chernobyl nuclear disaster...these images remind us that accidents like Chernobyl are a possible outcome of nuclear power—anytime, anywhere. © Gerd Ludwig
Gerd Ludwig is a widely renowned photographer. His association with the National Geographic Magazine goes back 25 years. In his work, he focuses on documenting the post-Cold War socio-economic changes in the countries of the former Soviet Union. © Gerd Ludwig
Women exposed to the fallout as children have now reached child-bearing age and fear giving birth to babies with congenital defects, worrying how radiation may have affected their genes. While some in the scientific community question that birth defects and retardation are directly attributable to the disaster, noted scientist Alexei Okeanov has described the health effects of the accident as "a fire that can’t be put out in our lifetimes." © Gerd Ludwig
Minsk, Belarus, 2005. Suffering from thyroid cancer, Oleg Shapiro, 54, and Dima Bogdanovich, 13, receive care at a thyroid hospital in Minsk, where surgery is performed daily. As a "liquidator," [someone who worked in the clean-up after the disaster] Oleg was exposed to extreme levels of radiation. This was his third thyroid operation. Dima’s mother claims that Chernobyl’s nuclear fallout is responsible for her son’s cancer, but Belarusian officials are often instructed to downplay the severity of the radiation. © Gerd Ludwig
Kiev, Ukraine, 1993. Children are examined for cesium-137, a radioactive isotope of cesium which is formed as one of the more common fission products by the nuclear fission of uranium-235 and other fissionable isotopes in nuclear reactors and nuclear weapons. © Gerd Ludwig
Kiev, Ukraine, 2011. Victor Gaydak, 70, a "liquidator" of the Chernobyl accident, watches news of the nuclear disaster in Fukushima, Japan. A major in the army, he was on duty when the Chernobyl explosion occurred. After the disaster, he had two heart attacks and developed severe stomach cancer. Evacuated from Pripyat, he now lives with his family in Troeschina, a suburb of Kiev to which more than one-third of the population was relocated after the Chernobyl accident. © Gerd Ludwig
Opachichi, Ukraine, 1993. When Soviet authorities finally ordered the evacuation, the residents’ hasty departure often meant leaving behind their most personal belongings. The Soviet Union did not admit to the world that an accident had occurred until two days after the explosion, when the nuclear fallout cloud reached Sweden and scientists there noticed contamination on their shoes before entering their own nuclear power plant. © Gerd Ludwig
Teremtsy, Ukraine, 2011. Kharytina Desha, 92, is one of the few elderly people who have returned to their village homes inside the Exclusion Zone. Although surrounded by devastation and isolation, she prefers to die on her own soil. © Gerd Ludwig
Near Pripyat, Ukraine, 2011. A radiation sign along the road warns of the danger. The tranquility of the sight on an evening of heavy snowfall belies the lingering threat in the peaceful winter landscape. © Gerd Ludwig
Chernobyl Exclusion Zone, Ukraine, 1993. A former resident returns to her home in Stechanka to find it has been vandalized except for a calendar marking the day of the evacuation, May 4, 1986. © Gerd Ludwig
Vesnova, Belarus, 2005. Severely physically and mentally handicapped, five year old Igor was given up by his parents and now lives at a children’s mental asylum, which cares for abandoned and orphaned children with disabilities. It is one of several facilities in rural southern Belarus receiving support from Chernobyl Children International, an aid organization established in 1991 in the aftermath of the world’s worst nuclear disaster. © Gerd Ludwig
Pripyat, Ukraine 2005. A photo of the same street years earlier. "Radiation: it scares people and it scares animals. And birds. And the trees are scared, too, but they’re quiet." —Anna Badaeva © Gerd Ludwig
Pripyat, Ukraine, 2013. During a one-day visit to the Exclusion Zone, tourists only have a few minutes to snap photographs of themselves in front of the sarcophagus that encases the failed reactor #4. Its western wall, leaky and unsound because it was hastily erected after the accident, has recently been stabilized. "This is as close as you can get, hurry up,” announces the tour guide. Radiation is still so high that he asks visitors to stay on the paved paths "as radiation is substantially higher on the grass." © Gerd Ludwig
Pripyat, Ukraine, 2005. The peeling murals of an abandoned school offer just one example of the scenes of death and decay in the city. The atmosphere is one continuous poignant reminder that tens of thousands of people once called Pripyat home. © Gerd Ludwig
< [Chernobyl Nuclear Power Plant, Ukraine, 2013] The first section of the New Safe Confinement. The New Safe Confinement is a 29,000 ton metal arc that is 105 meters high and 257 meters wide. It will eventually slide over the existing sarcophagus to allow deconstruction of the ailing shelter. In order to provide an indestructible base for the shelter, 396 enormous metal pipes are hammered 25 meters into the ground. Afterwards, the New Safe Confinement will move into place on rails. © Gerd Ludwig