Award winner
Abducted Nigerian School Girls
Last spring, the plight of nearly 300 kidnapped schoolgirls in Nigeria became known around the world—this series tells the story of the things they left behind.
Photographs and text by Glenna Gordon
View Images

Abducted Nigerian School Girls
Last spring, the plight of nearly 300 kidnapped schoolgirls in Nigeria became known around the world—this series tells the story of the things they left behind.

In her school notebook, Hauwa Nkeki wrote a letter to her brother: “Dear Brother Nkeki, Million of greetings goes to you thousand to your friend zero to your enemies.” On another page, she lists the names of her friends who are “good” girls, “stupit,” and “on top table” — the very best.

Hauwa is one of the nearly 300 girls who were kidnapped by the Islamic militants Boko Haram on April 14 from their school in Chibok, a remote village in Northern Nigeria. Boko Haram’s name translates roughly to “Western Education is sinful.” The group believes that girls shouldn’t be in school and boys should only learn the Koran.

For the past few years, Boko Haram has been burning villages to the ground, using forced recruitment and carrying out an ongoing insurgency. Thousands have died and the region has been devastated. No one took much notice before the girls were kidnapped.

In May 2014, a hashtag campaign (#BringBackOurGirls) became viral on Twitter and swept the globe. Within a week, it had attracted over 2 million tweets. A media frenzy began and coverage of the protests was extensive. But the thing that’s been missing from most of the coverage is the girls themselves.

Of course, the girls are missing from my photos too. Despite their absence, I have endeavored to show the girls as best I can. Since we can’t understand the things we can’t see, I wanted to do my best to make the girls visible.

For example, the girls’ school uniforms make them real, distinct individuals. One was made in a hurry, with messy stitching and different color threads. Another was utilitarian. A third uniform was especially dirty and threadbare. It’d been stitched again and again at the sides—torn and repaired, probably the only uniform she had.

In her school notebook, Elizabeth Joseph wrote the definition of the word “government”: “the word ‘government’ suggests different thing to diffen people. When we use the term “nigerian government” we usually mean the sum total of people and institution that make and enforce law within nigerian.” The cover of the notebook is lime green, yellow, purple and blue. There’s a silhouetted girl blowing a bubble.

The Nigerian government failed Elizabeth and the other girls of Chibok. This is just one tiny piece of their story.

Chibok girls' school uniforms. One was clearly made in a hurry, with messy stitching. Another was well-made but utilitarian. The last was especially dirty and threadbare. It'd been stitched again and again at the sides—torn and repaired, it was probably the only uniform she had. © Glenna Gordon
Photos of the kidnapped Chibok Girls. The photos courtesy of their families. Top row left to right: Yana Pogu, Rhoda Peters, Saratu Ayuba, Comfort Bullus, Dorcas Yakubu. Bottom row left to right: Hauwa Mutah, Hajara Isa, Rivkatu Ngalang. © Glenna Gordon
Rhoda Peters wrote a note to her in-laws, thanking them for a composition book. The top right says, "no need of address." "Hello my in-low, how are you, and how about your school, why do you give me This Exercise Book, I thank you so much have a nice day" © Glenna Gordon
Rhoda loves going to church and her favorite food is rice and beans. Her dad is a civil servant in Chibok. She's the kind of girl who would write a thank you note to her in-laws after they bought her a notebook. © Glenna Gordon
Hajara Isa is one of more than 200 girls who was kidnapped from a school in Chibok in Borno State on April 15 by Boko Haram, a terrorist group in northern Nigeria. Schools in the area had been shut down due to Boko Haram attacks but the girls had returned to sit for their final exams. © Glenna Gordon
Dorcas Yakubu is 16 years old. Her parents describe her as a shy girl who loved eating tuwo (a local dish). The cover of her notebook has the Eiffel Tower on it. © Glenna Gordon
Dorcas draws hearts on the first page of her notebook. © Glenna Gordon
Dorcas' toothbrush, which was left behind. © Glenna Gordon
Hauwa Mutah wants to be a biochemist. She is the sixth of nine children. Her favorite subjects are geography and English. She slept on the bottom bunk in her dorm. © Glenna Gordon
Another article of clothing from Hauwa Mutah. © Glenna Gordon
The skirt from Monica Enoch's sports uniform. Monica, 18, loves singing. Her father is a pastor. Her friend Saratu escaped an attack from Gambaru, another village nearby, but lost her family and came to live with Pastor Enoch and Monica. Both girls were among the more than 200 girls who were kidnapped. © Glenna Gordon
Monica's shoes, that were left behind. © Glenna Gordon
Margaret "Maggie" Pogu, 16, loves playing with her friends. Her father is a teacher in Chibok. © Glenna Gordon
Hauwa Ntaki wants to be a nurse or maybe an economist. She was third in her class. She loves volleyball. Her school notebook includes a letter to her brother and notes on the solar system. © Glenna Gordon
Hauwa wrote in her notebook, "Dear Brother Nkeki, Million of greetings goes to you thousand to your friend zero to your enemies" © Glenna Gordon
Hauwa drew pictures of the solar system, writes the dates of the solstice and equinox and copies the word "eclipse" again and again. © Glenna Gordon
Here, Hauwa lists the names of her friends who are "good" girls, "stupit" (i.e., stupid), and "on top table" — the very best. © Glenna Gordon
On another page, she writes the lyrics of a song in Hausa, the local language, about how men shouldn't abuse women and should appreciate them. She also doodles something, perhaps suggestive, which she then crosses out. © Glenna Gordon
Comfort Bullus is one of more than 200 girls who were kidnapped from the school in Chibok. © Glenna Gordon
Elizabeth Joseph’s brother said that she liked to play hide and seek. She also liked reading her Bible by lantern. © Glenna Gordon 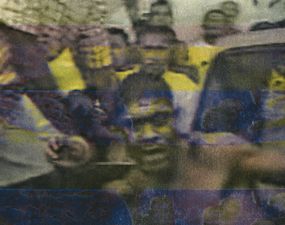 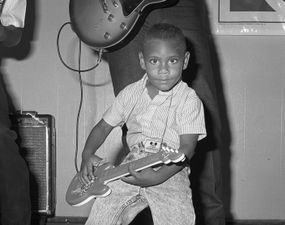 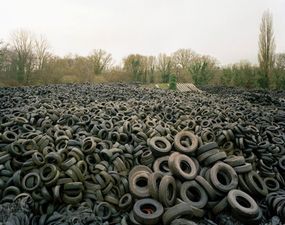 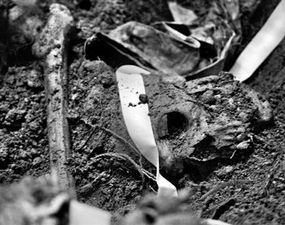 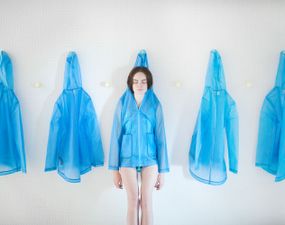 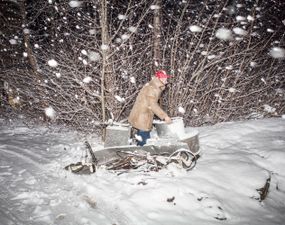 Enkele ideeën—Some Ideas
Pauline Niks
An ambitious, collaborative art/travel project in the dead of Swedish winter transforms into a precious diary of those moments in between, the unexpected times when the true meaning of travel comes to light.