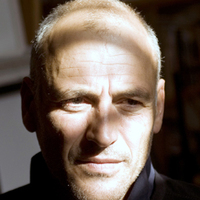 Guy Tillim
South African photographer Guy Tillim creates lush, complex, interweaving photo essays that seem more like nonfiction novels than photojournalism. Indeed, to my mind, his photographs and stories are best encountered in the several excellent books he has authored.

He began taking pictures as a member of  the photocollective Afropix, in the mid 1980s during the last days of apartheid. Tillim has worked as a freelance photographer in South Africa for the local and foreign media, including positions with Reuters between 1986 and 1988, and with Agence France Presse in 1993 and 1994.

While continuing to focus on the social and natural challenges on the African continent, his working style has evolved into a much more subtle, quiet, and enigmatic approach. He has photographed child soldiers in Congo, refugees in Angola, people who live in the high rises of Johannesburg, and the surrealistic decay of post-colonial modern architecture in many parts of Africa.

As one critic noted, “Tillim’s work counters First-World expectations of these places — in between his portraits of those caught in the aftermath of war or displacement, he is apt to capture the stillness of these spaces as well. During an election rally, he might shoot toward the sky, capturing the tops of raised arms beneath a tree that fills most of the frame; or turn away from the action to shoot the rapids of the Congo River, or an empty bed under mosquito netting. In famine-stricken Malawi, Tillim chose to take classically-lit, Caravaggio-like portraits of its residents. That these moments of repose dominate a body of work shot in some of the world’s most war-torn places is a testament to the quietude of Tillim’s vision. His photographs have a hush and luminosity that runs counter to traditional ideas of photojournalism.”

Tillim has received many awards for his work including the Prix SCAM (Société Civile des Auteurs Multimedia) Roger Pic in 2002, the Higashikawa Overseas Photographer Award (Japan) in 2003, and the 2004 DaimlerChrysler Award for South African photography. In 2005 he won the Leica Oskar Barnack Award for his Jo'burg series.

In an interview for Lens Culture, Tillim said, “Photojournalism tends to try and create drama. Tries to look for a false drama, tries to use, you know, photojournalistic iconography to create a sense of moment. I think that there is a movement away from that in photojournalism. . . . because what you used to have were these quite inarticulate images that were seen to be so full of drama.”

Tillim spoke with me at length about his work and philosophy when we first met in Paris in November 2008. You can listen to an 18-minute edited audio recording of that conversation here: