Book review
Banality Can Be Beautiful
A retrospective book of this Magnum photographer’s street photography from around the world — timeless, non-narrative epiphanies of color and contours.
Photographs by Harry Gruyaert
View Images

Banality Can Be Beautiful
A retrospective book of this Magnum photographer&#8217;s street photography from around the world — timeless, non-narrative epiphanies of color and contours.

In the beginning there was color and color was Harry Gruyaert. Too grand a claim, perhaps, but something happened to Gruyaert when, leaving his native Belgium in the late 1960s, he found himself visiting Morocco and discovering a new world. Or, more accurately, he found a new way of photographing a world that had always been there.

Gruyaert had previously been to New York and seeing the Pop Art of Warhol and others had alerted him to the drama inherent in color, a photographic medium which at that time was straightjacketed in the field of advertising. It was time to claim color for images that weren’t trying to sell or promote a product, unless we say photography itself was the product.

“It’s the Middle Ages and Breugel at the same time,” Gruyaert said of Morocco.

It was a puzzling remark if taken at face level because the photographs he took in that country have little to do with a temporal era or communal scenes featuring peasants. Less puzzling is Gruyaert’s attempt to express his wonder at everyday scenes that completely shook him out of that comfort zone called familiarity; a revelation for him of how what was ordinary in one sense could be an eye-opener when color and form was seen afresh, as if for the first time.

This handsomely produced book from Thames & Hudson arrives to accompany Harry Gruyaert’s retrospective exhibition, at the Magnum Print Room in London from mid-September to the end of October. The book spans work from the early 1970s to 2012 but there is a concentration on photographs he took around the world in the 1980s. Together, they show timeless, non-narrative epiphanies of color and contours. In the course of revisiting Morocco in 1988, the frame of one shot is anchored by a giant bowl of marinated lemons. Returning to Belgium in the same year, his camera captures a similar vibrancy though this time in a group of housewives with their prams waiting for a street festival to pass their way.

“I discovered,” he said, “the beauty of banality.”

Strip the pejorative from the term, and banality gives us a neat noun to describe the subject matter of Gruyaert’s photography. There is nothing journalistic or freighted with emotion in his images, just prosaic moments of life where shades of color draw in the viewer: seven men in a Kerala office, one leaning on a table and, face in semi-darkness, looking at the camera like most of his company. There is no reason to impute special meaning or motive to their presence; their faces, like the bare table in the foreground, refuse interpretation. 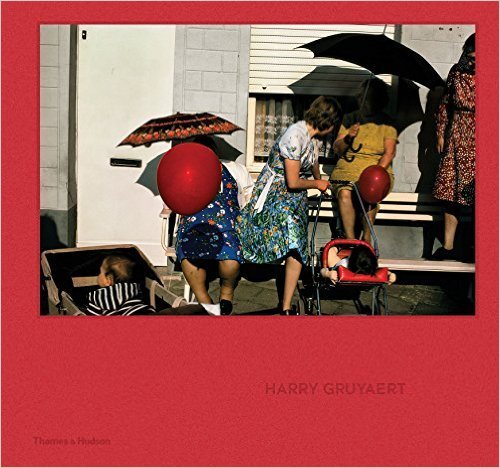