Book review
Next Of Kin: Documenting the Intimate Aftermath of War
With deep sensitivity and reverence, Inbal Abergil photographs the mementos and possessions treasured by families who have lost a soldier in the line of duty.

Next Of Kin: Documenting the Intimate Aftermath of War
With deep sensitivity and reverence, Inbal Abergil photographs the mementos and possessions treasured by families who have lost a soldier in the line of duty.

There is an image at the beginning of Inbal Abergil’s recent book, Next of Kin, that nailed me to my seat as soon as I flipped to the page. In the photograph, boxes, backpacks, and plastic containers are stacked high in an industrial storage locker. There’s an army combat uniform and a carefully folded American flag tucked into the heap; cardboard boxes buckle under the weight of heavier objects above.

This pile contains ephemera of a life lived; a life that no longer exists, and yet these belongings remain. There is a sense of finality to the image: an awareness that although the owner of these objects is gone, the pile will persist for a long, long time.

These possessions belonged to Private Isaac T. Cortes, a soldier killed in action in Iraq on November 27, 2007. This photograph is one of four images in Next of Kin which, taken alongside a truly heart-rending account from Private Cortes’ mother, form Abergil’s portrait of Cortes and his family.

Throughout the course of Next of Kin, Abergil quietly lays out the aftermath of military deaths in a series of images and interviews that resonate with grief and deep desolation. The book delves into the ways that families in America preserve the memory of loved ones killed in combat. Much of Abergil’s artistic practice focuses on the aftermath of war—her previous series “Nothing Left Here But the Hurt” chronicles public monuments of war and trauma. Next of Kin, then, is the private continuation of this investigation. As in “Nothing Left Here But the Hurt,” there are very few people in Next of Kin—the only image of another person (besides the occasional photo-of-a-photo) depicts a memorial tattoo that stretches across both forearms. Instead, Next of Kin pays tribute to the private altars, stuffed animals, and well-worn t-shirts that serve as tributes and totems, connections to soldiers who have passed away.

The slender volumes in Next of Kin (there are two books: Part I and Part II) have matte, smooth covers embossed with the title; a simple, unassuming design that belies the potent stories held within. Abergil shot this series over the course of four years, from 2014-2017. Originally from Jerusalem, she traveled across the United States to meet with Gold Star families (families who have lost relatives in military combat) in order to document their grieving processes and learn more about the aftershock of a soldier’s death. The book pairs resonant still-life photographs taken around the Gold Star homes with emotional, verbatim accounts from the fallen soldiers’ family members.

The sensitivity and respect in Abergil’s photographs and practice is remarkable. She treats the objects she photographs with a reverence that emanates from the pages of her book—her “portraits” of the belongings owned by soldiers are deeply affecting. In one image, a Bible, its pages tattered and well-worn, leans tiredly against a pillow. There are careful notes squeezed into the margins of the pages; thoughtful notations, references to other books and passages. Every line is marked up. These details flesh out the character of this soldier, Captain Jesse Melton. He didn’t just read the Bible—he rolled every line around in his head, digging to find new meaning, new connections. Details like these create a sketch of a person where before there was only a dark space, a silhouette. Abergil understands that her photographs are part of this recreation, and therefore treats every subject with honor and compassion.

The stories in Part II are piercing in their simplicity and their sorrow. Mothers, fathers, wives, and sisters recount to Abergil how they found out that their loved one had died. The accounts are all in their words—there is no interjection from Abergil. They’re almost stream of consciousness—sometimes they barely make sense—but as a result, they feel as close as you can get to listening in on a real conversation. I tried to capture the power of these interviews, but ultimately they need to speak for themselves. The following texts are excerpted from Next of Kin.

“We can be buried with Chris. We just learned this. We had to determine how deep they were to dig it and then how many places to leave open to be buried with him…Although you would trade your [life] for his so that he could live a little bit longer and experience things that you’ve experienced and he would’ve made a great dad.

You try so hard not to forget things because you don’t want to forget them. It’s just hard to remember, when you have four children and you try and remember and you get confused which child was that. Thank goodness for pictures because it’s captured, that memory is captured, and you can remember, especially if you can write on that picture what it was about.”

“I couldn’t explain it, I just had this feeling, and I drove up into my driveway and I drove in the garage and it was just this kind of slow-motion weird feeling…I stood in the middle of my living room and that thought crossed my mind, what if? And I lifted up my blinds, I looked out my window…and I turn around and say ‘Dear God, what if?’ Then I went to my computer, eager to find an email from him. and the first thing I saw was ‘five killed in Kandahar.’ It just screamed at me…I turned around and I stood in the middle of that same spot in my living room and then King Kong knocked on my door.”

“I lived in a townhouse in Italy. At 11:00 at night, I didn’t know who was buzzing my gate. But I kind of had that sickening feeling. I didn’t immediately let them in, because I didn’t know who it was, so I walked out there. I saw the glint of the buttons on the uniform from the notification officer…So I knew exactly what it meant when I saw them. I let them in. We walked down to my house. They asked me if I wanted to sit down and I said, ‘No, just tell me. I already know what you’re going to say, so just say it.’ And they proceeded to do the, ‘On behalf of the president of the United States of America, we’re not happy to inform you…’ At some point, my friends put me to bed. I remember getting woken up the next morning and being taken onto the base to get a new ID card that no longer said ‘active duty.’ It said ‘active duty deceased.’”

In the image of Private Cortes’ belongings in the locker, nothing is in order, and that compounds the heartbreak. The pile’s heavy lean and haphazard stacking is so deeply human—we can’t help but imagine the hands that piled these boxes high, shoving more and more into the locker until it couldn’t hold anything else. And yet, staring at the photograph, my eyes caught on the image, rather than visualizing the soldier, I imagined the overwhelming human effort that brought these items to their current resting place. I imagined the invisible hands that gathered these clothes, books, boots and packed them away, slotting them into the mound. The pain of that act is visible in the pile, which threatens to tip out of the locker that contains it.

Some people grieve by putting things in order, but in this image, I saw something else—deep despair, weariness. Someone left behind to pack away their loved one’s belongings. The exhaustion of that act; the tiredness and grief that sinks deep into your bones and makes you feel as if you’re moving through mud, your motions slowed. No surprise, then, that these objects threaten to spill out. No energy left for details like these.

This is the focus of Abergil’s book and work. Although it also memorializes the soldiers, Next of Kin is, first and foremost, a poignant portrait of those who are left behind. The stories in Part II are about each soldier’s life, yes, but also how the family has coped with their death. In some cases, the pain is fresh, like a scraped knee. In others, the sorrow has settled deeper—no longer there in every moment, but a constant ache, pulsing in the background. This aftermath, Abergil’s book implores, must also be a part of the dialogue about war. The “human price” of conflict can’t be counted exclusively in casualties, but must also account for the people left behind.

Next of Kin was published by Daylight books in 2017. It contains 78 color photographs and a set of interviews along with essays by Fred Ritchin, Stephen Mayes, Carol Becker, and Maurice Emerson Decaul. 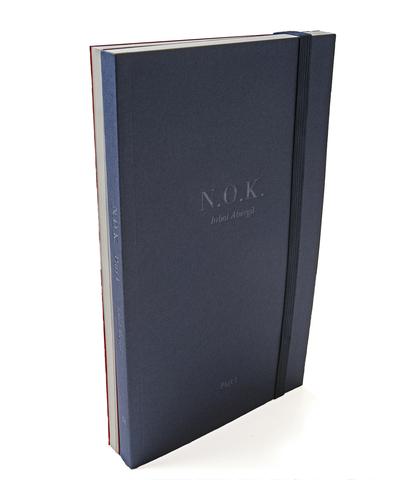 Next of Kin by Inbal Abergil