Feature
A Place of Our Own
This long-term photography project follows four young Arab women as they contend with hostilities, prejudice and vibrant daily life in Israel, their home country.

An exhibition and book by Iris Hassid

A Place of Our Own
This long-term photography project follows four young Arab women as they contend with hostilities, prejudice and vibrant daily life in Israel, their home country.

A new book, and its excellent accompanying exhibition at the Jewish Museum in Amsterdam, are destined to initiate dialog and raise questions about ongoing tensions in Israel between its Arab citizens and the Jewish majority.

For this project, photographer Iris Hassid, who is Jewish, spent six years getting to know four young Arabic women trying to live daily life while they were studying at universities in Hassid’s neighborhood in Tel Aviv.

Hassid worked hard to earn the trust of her subjects — Samar, Saja, Majdoleen, and Aya — and they finally found common ground in ideas around identity, feminism, and political discussions, among other things. The mutual trust helped all of them through difficult times over the course of the project: the war in Gaza, the bitter and hateful election campaign in 2015, and the 2018 ‘Jewish Nation State’ law, which, among other things, removed Arabic as an official language of Israel, furthering the sense of the students feeling unwelcome and unwanted in their own country.

Quotes from their discussions about these social and political issues pepper the exhibition and the book, adding weight and nuance to the photographs that often look quite normal (at first glance) to people from outside Israel.

Her project presents photos, videos, and quotes in 4 languages — English, Dutch, Arabic and Hebrew — and depicts the culture clashes experienced by the women over six years.

Initially, the focus is on the expected transitions moving from family homes (often very protective environments in conservative communities) to experiencing independence as proud, ambitious university students living in ‘mixed’ urban environments, while confronting hostilities and prejudice that feel shockingly new to these young people.

Over the years, we follow them as they move from being students into the beginnings of adulthood and professional careers — as an architect, an actor, a psychologist, a social worker — and continuing to navigate cultural differences, including marriage, property ownership, politics, and more.

The book includes an insightful essay, “There Are Many Ways Not To See,” written by Gilad Melzer that identifies many of the thorny complexities for Arabs living in Israel today. He writes:

“All individuals and societies have their blind spots. In Israel, the name of the largest blind spot is “The Arabs.” The presence of Arabs in the Israeli public sphere has led to an insistence — conscious at times, and unconscious at others — not to see them, or to see them only partially. […]

“What does it mean to identify somebody as belonging to a specific community, group, or culture? What does one see? Who reads certain political codes, and who misses them? There are photographs in which signs of Arab identity are clearly visible, and others from which it is absent; in most of them, it is merely part of the composition and wealth of information, and has to be actively sought out.”

It seems worthwhile to spend some time with this work and these ideas. Visit the exhibition at the Jewish Museum in Amsterdam June 24, 2022 - January 29, 2023, and read the book. 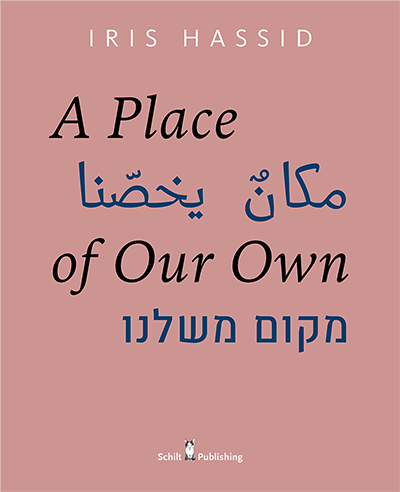 A Place of Our Own