Close but Impenetrable: Portraits of Tribes from southern Ethiopia
Isabel Muñoz photographs warrior tribes of Ethiopia. In an audio interview, she talks about challenges, surprises and gaining trust. 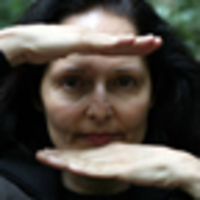 Isabel Muñoz has always used her camera to move in close to her subjects — closer than we would permit ourselves. She’s done this so well with sensuous dancers in her series on the rituals of the Tango, Flamenco and traditional Oriental dance. She has captured exquisite “fragments” of the acts of intimacy and seduction with striking interplays of bodies, limbs, shadow and light.

In her most recent work, shown here, she has challenged herself even more by venturing into southern Ethiopia to photograph 21st century Surma, Nyangatom, Bodi, and Topossa tribal members. Some of the warriors, like the first one shown at right, kill their neighboring tribesmen as a matter of pride.

Working with a portable photo studio (three cameras, backdrops, generators and lights), Muñoz gets in close again, with striking photographs that are rich with details: the leather-like textures of skin, drips of sweat, patterns of scarification, piercing, mud and body paint, and elaborate decorative body art. But these are not intimate portraits. Her subjects stare directly into the camera with mask-like faces, fierce dignity and palpable distrust in their eyes. The effect is especially unnerving because the photographs and the people are so pristinely beautiful.

Although she cites Leni Riefenstahl as her inspiration to make these photos, Muñoz chose to isolate and separate the people from their natural surroundings, whereas Riefenstahl seemed to celebrate the whole of tribal life. Riefenstahl's photos demonstrate a sense of lively cooperation and collaboration between photographer and subjects at ease in their environment. To my mind, Muñoz’s photos have more in common with the technical beauty and intense scrutiny of Avedon’s series of drifters in the American west.

In a tour de force at a recent solo show at Gallerie Seine 51 in Paris, Muñoz displayed this current work in three unique formats: luscious traditional silver black-and-white prints; larger-than-life platinum contact prints; and exquisite digital color prints that shock you with their intense vibrancy — and remind you that these people live in the 21st century.

Isabel Muñoz talked with me about this work in October 2005. Among other things, she explained the intentionally seductive nature of the body decorations; never completely gaining their trust; and the visual ambiguities between the sexes.

You can listen to a 10-minute excerpt of our conversation here.

She also recounts a bit of human nature that allowed her to gain a bit of trust with her subjects (3 minutes).